Could a Personal Locator Beacon or EPIRB carried by a passenger aid in locating a downed airliner?

There've been a lot of questions lately about tracking aircraft, and after a conversation with a friend of a friend I started wondering:

Could a PLB or EPIRB carried by a passenger or crew member aid in locating a downed or missing airliner? There are a dozen or so brands out there, most using similar technology, like this ACR ARTEX unit: 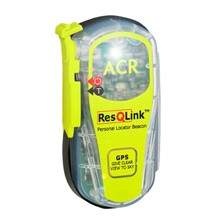 Now, I'm well aware of the FAA and FCC regulations about electronic devices in flight, and that's not what I'm interested in. I also realize that airliners already carry an ELT.

If a paranoid passenger brought one on board, would these devices function at all from inside an airliner cabin? Some feed GPS location data to a 406MHz locator beacon, and those would potentially be less useful (as they'd have to be at hand and probably triggered manually. Others, like the Spot GPS tracker, have the ability to upload GPS track data on the fly to satellite communications networks such as Iridium.

I'm personally skeptical, given that GPS generally needs a clear view of the sky and that a fuselage seems likely to block or reduce a 406Mhz ELT signal, but I'm curious to know if there's any information out there.

It's possible, but there are many individual elements involved. It's a matter of probability that most of the time there will be a combination preventing the link to work. If you know what to do and take care of ensuring a good direct line of sight (LOS) you may be able to avoid some of these combinations. It cannot work underwater.

Parameters that can attenuate the signal reaching the satellite receiver are of different origins:

I'm not aware of experiment results for using a PLB within a metallic container like a commercial aircraft cabin. It's still possible to evaluate the RF channel loss in different configuration and see if the signal can reach the receiver with the minimum required level.

As explained in the next sections about the Sarsat satellites of the international SAR service on 406 MHz:

Indoor transmission put the system at its limits of detection capability (a S-meter unit is 6 dB).

Many small attenuation causes that, when summed, can prevent the link to work must be taken into account, hence this answer is a long one.

SPOT LLC solution you mention is a commercial messaging initiative working on 1.6 GHz, out of the Cospas-Sarsat system. Higher frequency means higher attenuation. The limited 0.4 W RF output also makes the signal weaker. It's very unlikely that SPOT could work within the cabin.

Emergency PLB operate on 406 MHz. The previous 121.5 MHz civil frequency is not monitored anymore by SAR satellites, but can be used (in addition of the actual signal at 406 MHz) as a homing guide for the SAR team. They are informed about whether this homing feature is active or not by the message sent by the PLB.

I'll focus on LEOSAR / Sarsat payload which provides the best chances for the detection of a PLB signal partially blocked by RF impermeable obstacles.

Satellites carrying a LEOSAR Sarsat payload are NOAA 15 (Sarsat 7), NOAA 18 (Sarsat 10), NOAA 19 (Sarsat 12). Other are scheduled to be active in the future (some may be already, I haven't checked). They are fitted with a SAR receiver (search and rescue processor, SARP). Sarsat satellites can be tracked on N2YO.com.

Can this small quantity be delivered to the SARP from the inside of a cabin?.. This is a matter of knowing the initial power, and determining the loss along the wave path until the signal reaches the receiver.

The power generated by the transmitter amplifier is 5 W, or 7 dBW. 161 dBW on the receiver means receiving a 1 W signal that has been attenuated by 161 dB. If we have already 7 dBW at the source, we can bear a maximum attenuation of 168 dB. 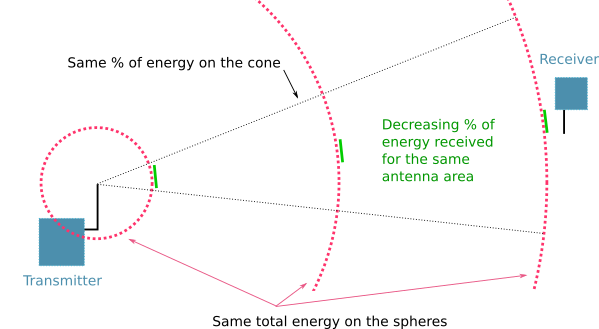 Loss due to distance

Loss is dependent on two factors: distance and wavelength. Both factors limit the area of the receiving antenna compared to the whole sphere of the wave front, and in consequence the portion of energy received is smaller too.

The signal that left the PLB antenna reaches the SARP antenna -143 dB weaker, assuming the best antenna alignment. But this is never the case, because when in a polar orbit, the satellite is unlikely to be exactly above the beacon.

Misalignment of the receiving antenna

There will be an angle between the nadir of the SARP and the beacon. This off-nadir angle, depends on the actual track of the satellite for the current orbit:

The gain of the antenna varies according to this angle. Sarsat-TIROS SARP Receive Antenna (UDA) Gain Pattern: 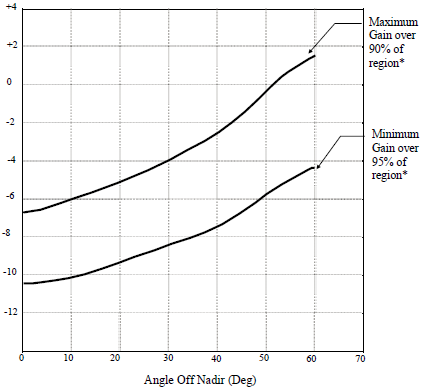 Assuming the polarization is favorable (RHCP), the gain may varies between +2 dB and -10 dB. Note that:

We should now work with the probability distribution of the misalignment for the LEOSAR antennas to have the full range of possibilities and their likelihood (e.g. Monte-Carlo simulation). To simplify, let's just use a bad case: -4.4 dB (this is not the worst possible). Loss so far: -147.4 dB (-143 - 4.4).

Attenuation due to feeder and duplexer

On the satellite, the SARP is connected to an antenna via a duplexer to isolate the SARP uplink antenna from the SARR downlink signal (SAR repeater used on local mode, not detailed here):

Hardware on the Sarsat satellite (source)

We had a budget for -168 dB loss, we have used -149 dB. The margin until the PLB signal is lost by the SARP is 19 dB, assuming we are in this configuration:

It's time to re-look at the assumption made until here, and take into account the additional effects encountered when the PLB is used from the cabin of a crashed aircraft.

Let's recapitulate the losses we have discussed:

The worst case is encountered when:

Note that carrying a personal locator doesn't cause a safety problem, as it doesn't transmit before being activated. Activation will be either manual (usually for PLB) or by sensing a large acceleration (seems limited to ELT). I don't know if the security guys at the airport will let you board with a transmitter. It should be easier to persuade the pilots.

Case of a SPOT device

Compared to the numerous documents that describe governments-financed SAR service on 406 MHz, SPOT is a more confusing solution.

This is not related to SPOT, the observation satellite family built by Astrium. GEOS IERCC (International Emergency Response Coordination Center) has no link with the GEOS satellites family launch by Nasa some decades ago. It is not either GOES, the geostationary satellites that support GEOSAR.

It seems that these three technical differences are not going to make SPOT devices as efficient as Sarsat:

If I'm not wrong, that's already a difference of -28 dB at the receiver. It must be very sensitive, or be liked to hi-gain antennas to compete with the governments-operated SAR. That's not going to make it from within the cabin of an aircraft with a limited LOS, and sometimes this seems to even not work well in the open space.

I have a SPOT Beacon that I use for occasional adventures: mostly flying small planes and kayaking. But its small enough I generally carry it with me when I fly commercial. 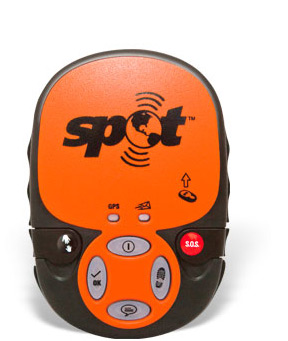 Because it connects to satellites, no one needs to be nearby to "hear" it. I can press the SOS button most anyplace in the world and summon help.

There are some remote parts of the ocean where there is not good satellite coverage, (see the coverage map), but generally it may help in an emergency.

I don't know if such a device would work from inside a commercial airliner. I do know I've been able to get GPS signals by pressing a GPS receiver up against a cabin window, but it is slow to acquire the GPS lock. I don't know if it could transmit to the satellite network through the cabin window.

These personal locator beacons actually operate via the Cospas-Sarsat system of international search & rescue beacons, nothing to do with Iridium which is a commercial system. The have been known to transmit a signal perfectly well through things like a locked metal cabinet in a basement of a house with the antenna retracted and still summon help, in that case by error though.

ELTs do not normally use GPS. There are newer GPS reporting devices that do use GPS, although they cost more. They work inside vehicles because the signal goes through the window. Commercial planes usually have 2 of them, one in the tail and another portable one in a forward locker or bin. Feel free to bring a bag of them onboard. Do not accidentally activate it or you will piss people off big time. They are designed to work in water and are automatically activated when submerged.

No, they couldn't. EPIRB beacons have a very short range, by the time you get a signal you'd also have a signal from the beacons in for example the flight data recorder.
You seem (like a lot of people) under the impression that GPS receivers send their location to the satellite which then sends it somewhere to a data center where it can be retrieved. This is incorrect. The device only reads from the satellite network, calculating its position based on signals from the satellites. And it then uses either a short range radio transmitter or a cellphone network to transmit that location to interested parties. But of course in the middle of nowhere there are no cellphone towers and a short range radio doesn't help if the nearest recipient is far away.
On a ski slope that's no problem, as you're in civilisation and not far from help. In the middle of the ocean it's of no use whatsoever.

Not the answer you're looking for? Browse other questions tagged safety avionics passenger electronics or ask your own question.

3
How much would it cost to fit and maintain every passenger life jacket with personal beacon?