Which air stream pressure / speed is measured by the pitot?

The pitot tube is used to measure the air pressure later converted into air speed. However air pressure varies according to several elements, including the location related to the wing: 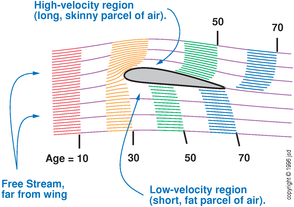 On one hand the probe, depending on its location, could measure the pressure in the free stream, in the high velocity stream, or in the low velocity stream.

On the other hand, pitots are found at various locations, e.g: 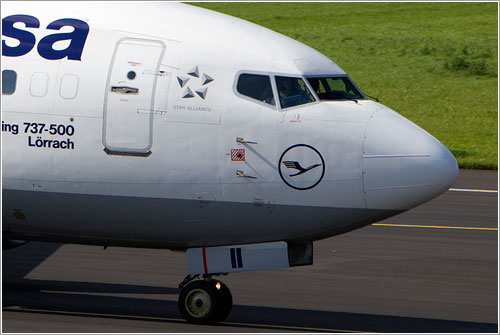 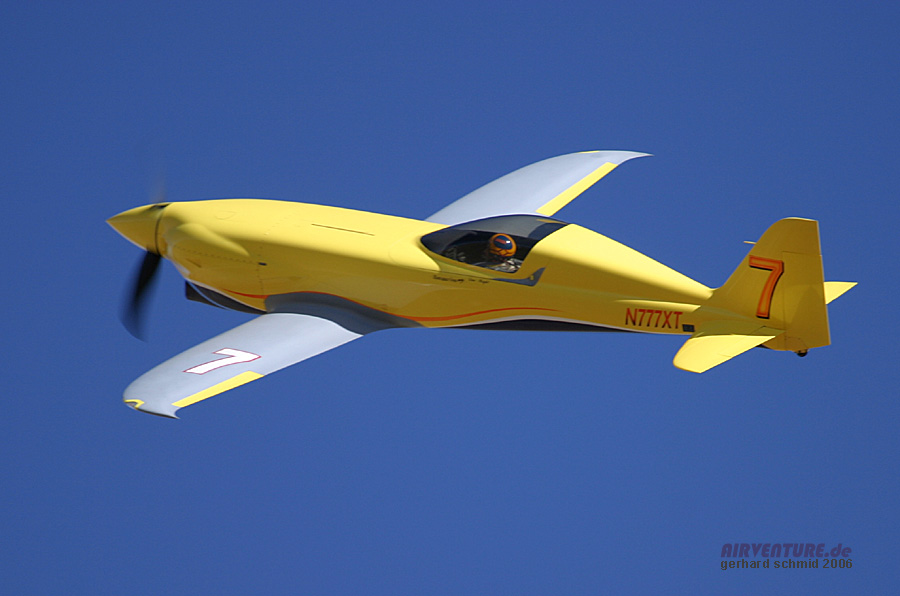 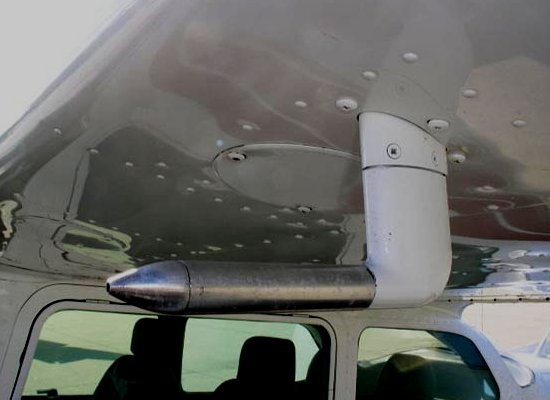 Furthermore when the probe is fixed to the fuselage or to the stab, depending on the angle of attack, it can be rotated into the slowed down or the accelerated portion of the stream.

Can you shed some light on what is usually measured by the pitot? Does the pitot indicate different pressures if placed in the different stream areas (free, accelerated, decelerated)? If so:

Edit: While I needed to select a single answer, several other answers contain additional interesting elements and deserve votes as well.

You're correct that there are a number of parameters that influence the measurement of air data in general. For example, the total pressure measurement (as done using the Pitot tube) is influenced by,

In case of total pressure, as long as the (pitot) tube is outside the boundary layer and the flow angle is less (<10% usually), the error is negligible. The following image shows the error due to incidence angle at different speeds for different head designs. Here, $H_{0}$ is the Free stream total head es measured in the tunnel intake and $H_{1}$ is the head measured by the instrument. 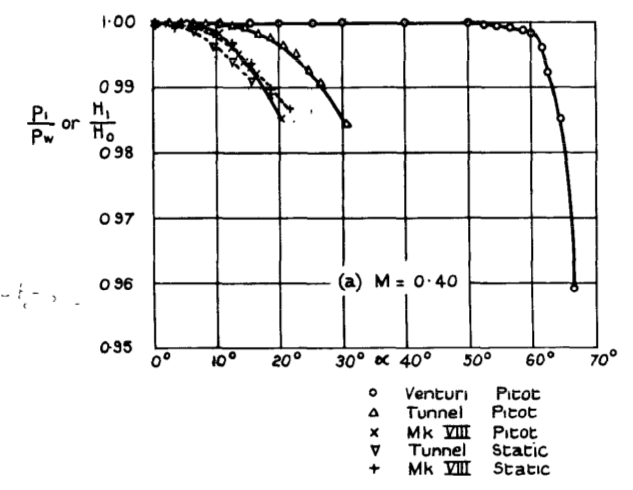 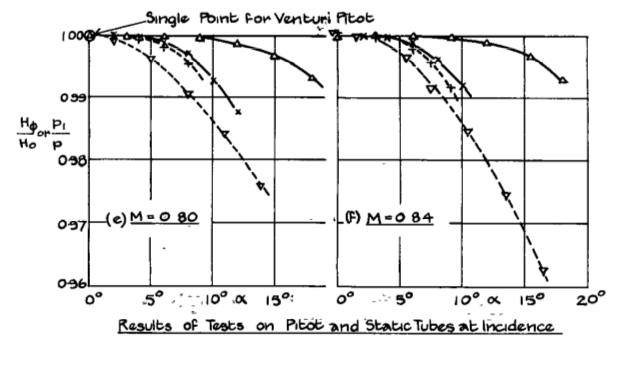 Image from Tests on the Effect of Incidence on some Pressure Heads at high Subsonic Speeds by E W. E. Rogers, D.I.C., & SC and C. J. Berry,

From the same paper: 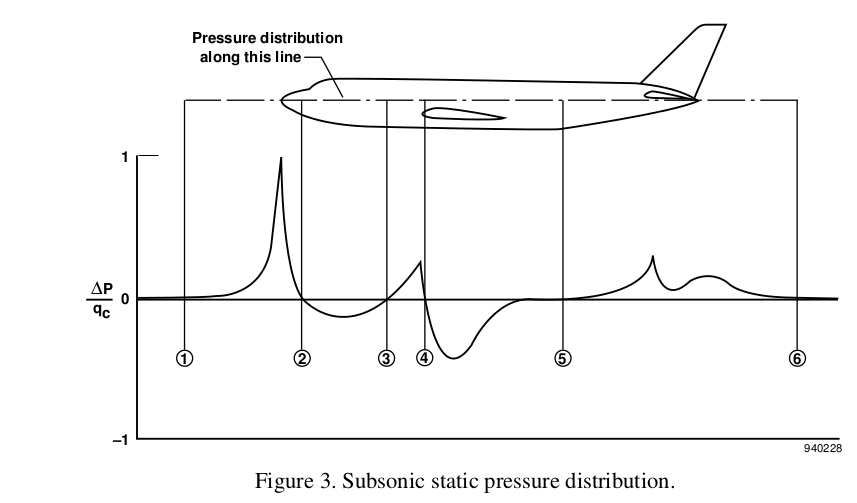 It would be better if the static ports are mounted at these points in order to reduce the error.

From the above data, it can be seen that for GA and commercial aircraft, the position of the pitot-static tube can be located with reasonable accuracy at a number of points as long as it is in the undisturbed flow.

Another point is that the pitot-static tube measures pressure and the Air Data Computer (usually) converts it into the required parameter (for eg. speed). So,if the errors are known (during flight testing, for example), the instruments could be calibrated as per requirements. In general, typical methods used for calibration are,

among others. Other electronic methods are also used for calibration purposes.

In order to achieve the very high accuracy required during flight testing and to serve as a reference, air-data booms are sometimes used in experimental and test aircraft, as can be seen in the F-35 below, whose data can be used for calibration.

In some extreme cases, the nose mounted airdata systems which are typically used (to minimize influence of aircraft on measurements) can be unsuitable due to specific reasons. A good example is the NASA F-18 High Alpha Research Vehicle (HARV) program, where,

... a noseboom was deemed unacceptable for this program. At high angles of attack, the noseboom has a significant effect on the forebody aerodynamics and thus on the stability and control of the aircraft. As a result, wingtip mounted sensors and a flush nose-cone mounted sensor were used.

The first thing to have in mind is that a pitot tube is NOT measuring speed: the pitot tube measures pressure and later on the airplane (flight management system in a modern airplane) calculates the speed based on pressure.

More specifically the pitot tube calculates the stagnation pressure which is the sum of static pressure (what you show in your picture) and the dynamic pressure (pressure obtained by stopping the air).

What I explained here justifies the following design solutions:

Speed indicator displays IAS(indicated air speed). It has all this position, installation, instrument errors. When you correct for these errors(using tables from aircraft manual) or air data computer you get calibrated air speed(CAS). Pitot position doesn't matter as it's compensated. High speed low pressure or low speed high pressure. Pressure inside the tube will be the same.

This is a link to the Instrument Pilot handbook offered by the FAA: http://www.faa.gov/regulations_policies/handbooks_manuals/aviation/media/FAA-H-8083-15B.pdf

page 97 explains the pitot-static system. It is a simple answer with illustrations. It might not explain every nuance of the system, but it is enough for a pilot to pass his exam!

35
Why are some windows in cockpits made openable?
9
How does the static pressure system keep the ambient pressure?
7
Why are static ports external on a non pressurized aircraft?
2
What would be the effects of installing pitot tubes on the engine covers?
2
Does the airspeed indicator measure speed inaccurately at different angles of attack?