Can a commercial airliner sink to the bottom of the ocean?

Is it possible that a commercial airliner could hit the ocean surface at such an angle that it made a deep dive intact, got filled with water, sank, and got stuck in mud at the floor of the ocean?

Large airliners are not desgned for this and are not even strong enough to make a landing on water in less than perfect conditions.

striking the surface at a larger angle would certainly lead to widespread disintegration.

Is it possible for a large modern jet airliner to sink intact?

Yes (as near as makes no difference)

Almost all large aircraft impacting the sea surface in an emergency or uncontrolled will break up immediately and catastrophically.

One notable exception was US1549, an A320, which was landed on water without breaking up. It was described as "still virtually intact though partially submerged and slowly sinking". The left engine detached and sank. 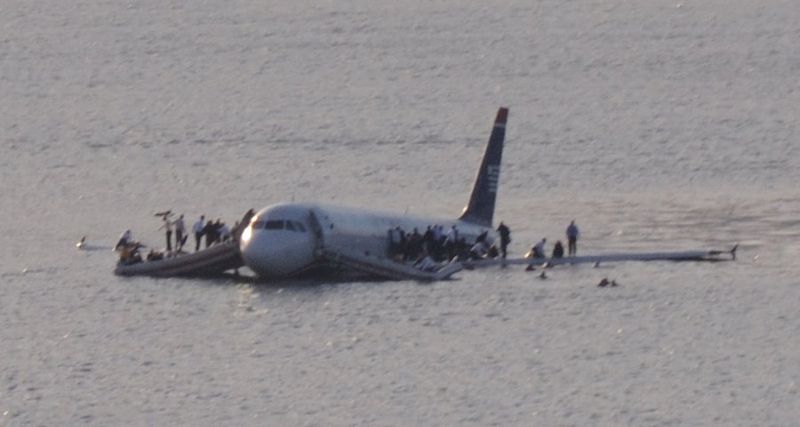 So a controlled landing on water is possible under extremely favourable circumstances. It would then be possible for the aircraft to sink in more-or-less one piece without creating a large amount of floating debris.

Hitting water at speed is a lot like hitting concrete (try experimenting with different positions hitting the water off a high diving board—some will hurt). Aircraft are simply not designed to withstand the sudden forces introduced upon impact with water, no matter the angle. If an aircraft were to hit the water at high speed, the relatively flimsy structures of the aircraft would shatter, disintegrate, and completely lose structural integrity.

My answer is: It depends. As always.

Generally, yes, it is possible to land an aircraft on water intact. But the aircraft has to help you with that. If the engines are not below the wings (turboprop, piston, jet at the rear fuselage), and the pilot flares to minimum speed right above the water, gear up, then most aircraft will stay intact. Many are even tested for ditching qualities during development. I personally know of the ditching tests of the Breguet Atlantique and the Antonov-70, and there are certainly more (see https://www.youtube.com/watch?v=jK8ydLY5QHQ at 2:15 min into the movie).

A Dutch Atlantique once had to go down and landed intact in the North Sea. It was towed into a harbor and lifted out of the water a few days later. The openings (for cooling air etc) have special valves which close automatically when the aircraft is in the water, much like a snorkel on a submarine (sorry, could not find a web source for this).

It would be judged upon the state of the aircraft once stopped after the collision, taking into account velocity and angle of impact etc.

If the A/C is in-tact and no water is taken on-board it will float for a greater time but I highly doubt it will for a large amount of time because water always finds entry points.

If the plane flew to empty, and the pilot made a manual controlled glide and water landing, he would still strike the water at a speed in excess of 150 mph.

The engines would still be ripped off, baggage hold doors would most likely open on impact. There would have to be some kind of debris field. The plane would sink, but not intact.

Something would come free and float to the surface.

Not the answer you're looking for? Browse other questions tagged airliner accidents ditching or ask your own question.

0
Are commercial aircraft water tight by design?
13
Could Malaysia Airlines Flight 370 have sunk without leaving any floating wreckage?
1
Can an aeroplane ever be so far away from an airport that it cannot land?

13
Could Malaysia Airlines Flight 370 have sunk without leaving any floating wreckage?
21
Has a commercial airliner ever crash-landed in an ocean?
7
Why do high-speed water impacts / ditching usually result in structural loss of the airframe?
15
Can a commercial airliner be used for military purposes?
5
What is the minimum speed for a scale-model of a modern commercial aircraft to fly?
34
Why can't you ditch your aircraft in the sea?
4
What is the stability of a 777-like plane if the engines flameout and the autopilot disconnects and the pilots don't make any inputs?
22
Does the ditching switch allow an A320 to float indefinitely?
0
What does a pilot do if all the engine shut down in the middle of the Ocean?