What does 'intercept final' exactly mean?

I work as ATC in Korea. I have question about the exact meaning of the word 'intercept'.

I think the word 'intercept' means not 'crossing' but means the state just on the final, not exactly crossing but just 'established'.

The reason why i have question about this is that in the PAR approach, for precision approach, the final controller can vector aircraft to be exactly on the final beyond the faf although he started control in the state aircraft is not exactly on final.

So I think 'intercept' doesn't mean "crossing" but something else... Because I'm not a native English speaker I want to know the exact meaning of the word 'intercept'.

In geometry, the point where two lines cross is an intersection, and the point where a line meets the axis (another line) is where it intercepts it. This is likely where these terms come from.

If you take the current location of the aircraft and extend the current ground track (the path) to the point where it intercepts the final approach course, that intersection is where the intercept occurs.

In ATC terms, when instructing a pilot *to intercept a course, you are telling them to transition from one course to the another like this: 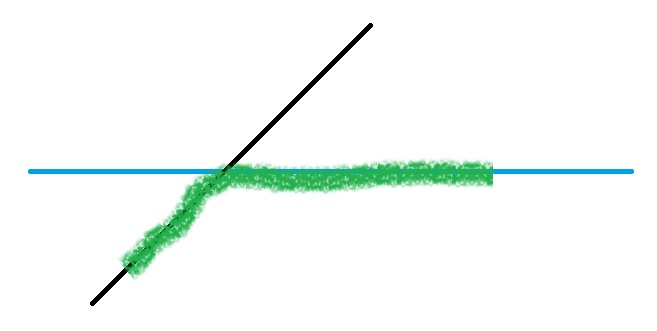 If they were instructed to not intercept the course, then they would be expected to continue on their original course (the black line in the picture above). Note that when a final approach course is involved in this situation, to be extra clear the phrase "vectors across final" is used so that they do not intercept when they aren't supposed to.

13
What is the procedure when being vectored for an approach and ATC allows you to pass through the final approach course?