What is the optimal bank angle to accomplish a given turn in a glide?

For an aircraft in a glide, what—if any—is the optimal bank angle to make a given turn while maximizing glide distance and maintaining published best glide speed?

In envisioning this scenario, I specifically have in mind a single engine aircraft experiencing an engine failure at low altitude. However, the aerodynamic theory may apply to any fixed wing scenario.

Edit: let me emphasize that this question assumes the pilot is maintaining the aircraft's nominal published best glide speed throughout the turn, not adjusting airspeed to some variable theoretical best glide speed. Airspeed should not be a variable.

The best bank angle is indeed 45°.

However, this can't really be separated from the best speed. And the surprising answer is that the stall speed (which is ~19% ($\sqrt[4]{2}$) higher than in straight flight) gives smallest loss of altitude for turning given number of degrees.

The question as asked is open to interpretation, so I will first rephrase it to have a basis to build upon. Your last paragraph tells me that you want to know the optimum bank angle to get the highest ratio of turn rate to altitude loss in a glide at a given airspeed.

Spoiler: Since steeper bank angles require more lift, and aircraft with better L/D are more efficient in producing lift, the optimum bank angle depends on the aerodynamic qualities of the aircraft.

What can be changed

First I need to formulate the ratio of turn rate over height loss. This then needs to be derived with respect to the bank angle and set to zero. To have a derivable polar, I use the quadratic polar where $c_D = c_{D0}\cdot\frac{c_L^2}{\pi\cdot AR\cdot\epsilon}$.

I further assume a coordinated turn, so we can define the lift and drag equations. Drag is compensated by selecting a suitable glide path angle $\gamma$ in order to convert potential into kinetic energy to keep the speed constant. The angular velocity $\Omega$ in a turn with the radius $R$ is $$\Omega = \frac{v}{R} = \frac{g\cdot tan\varphi}{v} = \frac{g\cdot \sqrt{n_z^2-1}}{v}$$ Height loss over time is vertical speed $v_z$, and this can be calculated from speed $v$ and flight path angle $\gamma$: $$v_z = v\cdot sin\gamma$$ Since $v$ is given and constant, we can rephrase the problem as a maximization of turn rate over flight path angle or sink speed. This is equivalent to the smallest height loss for a given azimuth change. $$\frac{\Omega}{v_z} = \frac{g\cdot tan\varphi}{sin\gamma}$$

Now we got a similar question but with both speed and roll angle as variables. Obviously, now we need to derive both with respect to speed and roll angle. But it is more fun to plot the results over these two as a contour plot. I just had to do this since several answers here claim that the optimum angle is 45°. Equally obviously, this is too simplistic.

The figure below is the result plotted in R. Since I need to read the full matrix of values for the contour plot, the area of low speed and high bank angle is filled with the result of a strict penalty function, so please disregard the values to the right and below the red line. 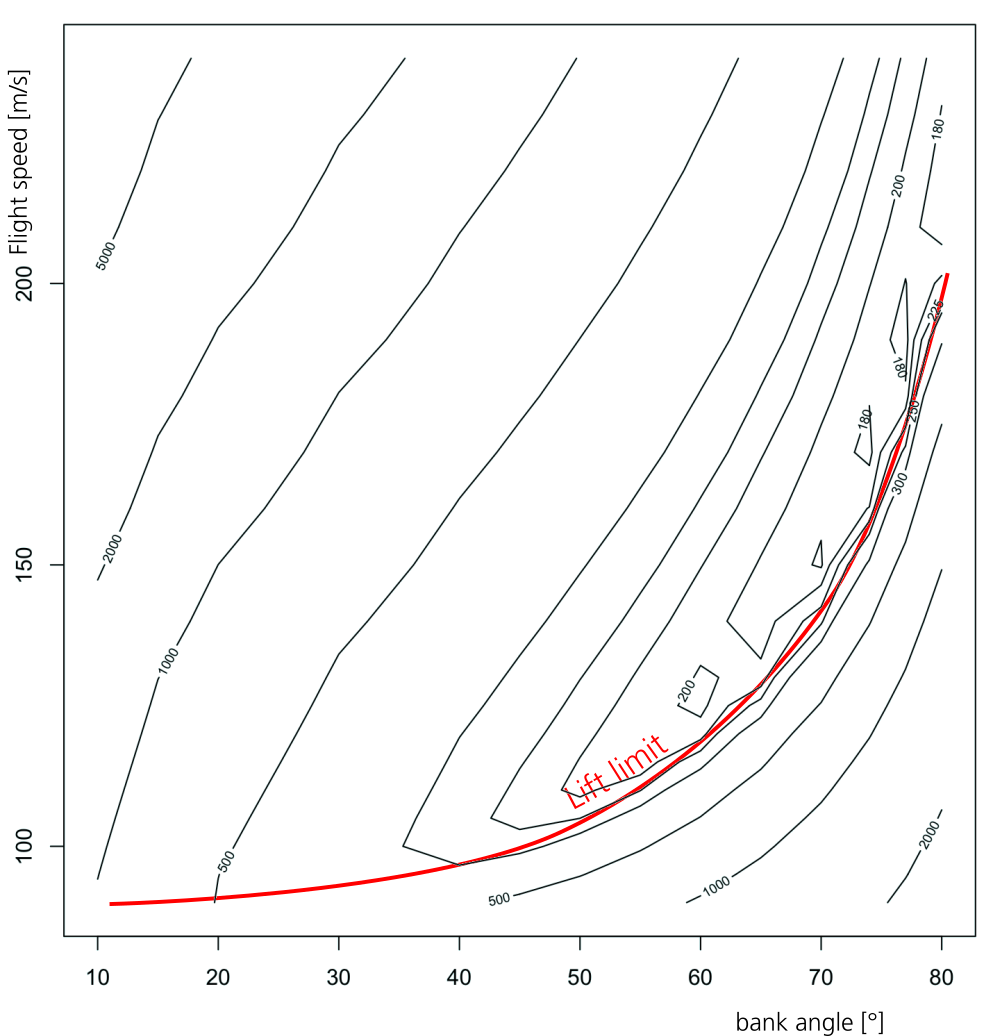 Contour plot of height losses a A320 type aircraft in a 180° turn at sea level and MTOW (78 tons), no wind. X is bank angle in degrees and Y is flight speed in m/s. Own work.

As you can see, the minimum (approx. 170 m) is achieved right before stall at a high bank angle and speed. Unfortunately, you need the aerobatic version of the A320 to fly this safely.

There is no general solution, at least without further assumptions.

What I have up to now

Without any knowledge of the polar in analytical form or assumptions we're stuck here.

The angular velocity (turn rate) is:

Let $v_V$ be the sink rate which is a function $f$ of the airspeed. The function $f$ is usually given as polar curve. For load factors other than $1g$, we have to scale it by the square root of the load factor $k$.

The best bank angle for a gliding aircraft to use to optimize both turn rate and sink rate can be generalized as 45°.

This phenomenon is purely a function of bank angle, wholly independent of other design or load factors, and therefore holds true for all fixed wing aircraft.

Edit: This may be a nominal answer, not accounting for minor variations in the L/D curves, but it satisfies my operational needs as a pilot experiencing an emergency where I will be maintaining "best glide" throughout a turn and my 45° bank is probably +/- 5°.

Maximise this expression with respect to $\theta$.

PS. When I do the math I get the $\theta$ that maximizes turn rate per sink rate as 90 degrees bank angle.

Obviously, I’m either messing up my math or my model. I must be wrong. Perhaps my blunder was to take lift $L$ as a constant? I suppose $L$ will change with bank too?

Also, I guess the stall characteristics should matter? Maybe that additional constraint would say bank at max angle that won’t stall you?

PS. This is just back of the envelope estimation. I’m probably being naive by not considering the complexities of the issue.

I'm adding another answer which looks way too simplistic but I cannot spot why it is wrong.

The term we want to maximize is "smallest height loss for a given azimuth change" & this can be shown to be the following borrowing @PeterKampfs logic:

where $\phi$ is the glide angle.

Since glide angle is known you must minimize $R$ to maximize the term "smallest height loss for a given azimuth change". But $$R=\frac{v^2}{g*tan \theta}$$

So to minimize R maximize $tan \theta$ & hence maximize $\theta$. So I might recommend bank as much as you can.

But there's an additional constraint introduced by the fact that you must not stall (obviously). You must use maximum $\theta$ but not above $\theta_{stall}$

Let the un-banked stall speed be $v_{stall}$. Under a banked turn of $\theta$ the stall speed increases to:

where $n$ is the load factor.

Therefore in a banked turn of $\theta$ the stall velocity will be:

Hence the max angle of bank would be the one you should use and that will be:

Not the answer you're looking for? Browse other questions tagged aerodynamics emergency glider pilot-technique theory or ask your own question.

1
What bank angle creates the least energy loss in an emergency engine out 180 degree turn?
36
Is it even remotely feasible to turnback a single engine aircraft with an engine failure?
4
What's the maximum bank angle of a glider?

2
Regarding the 1902 Wright glider. Why is the airspeed, Va, calculated adding the ground speed, Vg, and wind speed, Vw?
3
What is the relation between airspeed and generated heat at constant drag?
9
How do uncoordinated turns (skid, slip) affect a helicopter's turn radius?
10
How does turn radius change with velocity between Vm and Vs, as in a 180 degree turn in a canyon?
8
What costs less energy? Roll or Yaw?
5
How changes in Air masses, Air flow direction and intensity affect lift?
1
In a full-rudder sideslip in a Schweizer 2-22 or 2-33 glider, is the descent rate higher at 50 mph airspeed than at 60 mph airspeed?
8
What is causing these "corners" on this F-104 V-n diagram?
3
How to calculate the inaccuracy in the "standard" turn radius equation, for supersonic airspeeds
7
Aircraft pitch and AOA change during a coordinated turn maneuver