From other answers I've gathered that stall occurs when the air flow separates from the wing surface. And also that this starts at the back of the wing and progresses forward as AOA increases.

Is this process not uniform? What causes the buffeting just under the stall AOA? Is it simply the turbulence behind the point of separation?

Also, what factors, such as speed, altitude or air density affect the amount of buffeting?

This article states it pretty well (better than I can word it).

When the angle of attack (AOA) of the wing increases, the point where the airflow separates will move forward and the streamlined airflow will become turbulent and separate from the wing. This turbulent wake then meets the aft fuselage and tail section of the aircraft. This will be felt by the occupants of the aircraft as a rumble or buffet. Not all aircraft have a pronounced buffet, this depends on the size and location of elevator.

Interestingly enough you can also induce a stall (and first high speed buffeting) by gong too high and too fast while trying to maintain level flight which will cause the center of lift to move aft along the wing. Basically your stall speed and your critical mach number eventually converge this is known as the coffin corner. There is a nice discussion on it here.

Not all stalls start from the trailing edge and progresses forward. In general, three types of stall are described:

Buffet is a kind of vibration caused by aerodynamic excitation, usually associated with separated (or turbulent) airflow. As the aircraft approaches stall, the airflow over the wing becomes turbulent and if it flows across the horizontal stabilizer, buffeting may occur.

Whether low speed (stall) buffet happens or not depends on the aircraft characteristics; for example, the stall starts from the root in case of straight wings and the stabilizer is affected by the turbulent airflow before the outer wing stalls- this can be used by the pilot to take corrective action (as @Ron Beyer points out in his comments). In case of swept wing aircraft, the stall progresses the other way around- from tips to rot and it will be difficult for the pilot to use buffet in any real sense.

This buffeting can act as a warning for the pilot that the aircraft is approaching stall and he/she has to take corrective action. In aircraft that do not show this behavior, some warning cues, like stick shaker are sometimes incorporated in order to warn the pilot.

As density altitude increases, the angle of attack required to produce turbulence at the top of the wing (stall angle) decreases till a point is reached that the high speed buffet (Mach buffet, due to supersonic airflow) and the stall buffet (as already explained) converge. This point is called the coffin corner. 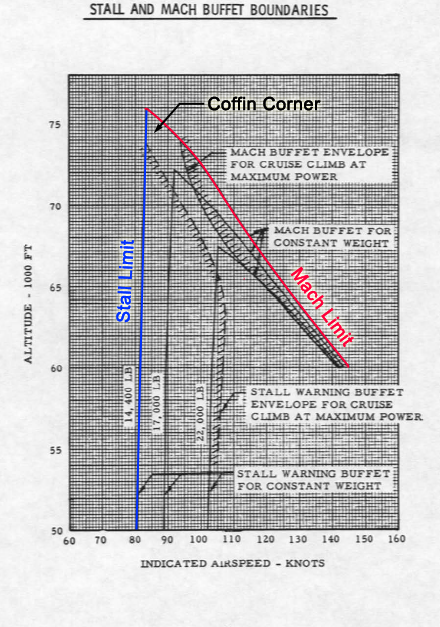 Not the answer you're looking for? Browse other questions tagged wing stall aircraft-physics or ask your own question.

17
Does stall angle of attack in inverted flight change due to the camber of an asymmetric airfoil?
5
When approaching stall, why does the center of pressure move back?
12
Why does stall speed decrease when flaps are deployed?
14
Why does a stall decrease lift, rather than increasing it?
1
How do aircraft stall warning systems handle (or not) asymmetric-stall situations?
7
Why do aircraft stall warning systems use angle-of-attack vanes rather than detecting airflow separation directly?
2
Why does the effective alpha/CL increase at wingtip of swept wing?
25
Why does airflow separate from the wing during stall?
1
What are the effects of separation at hypersonic rarefied flows?
4
What exactly happens when power is reduced in trimmed, straight and level flight?