Do Airbus pilots have to practice flying in alternate law?

I am sure when getting their type rating for Airbus FBW aircraft, pilots learn how to fly in alternate and direct law. After that, how much opportunity do they get to practice this skill?

On Air France 447 and Indonesia AirAsia flight 8501, the A/P switched off unexpectedly and the control law degraded to alternate 2. It appears in both situations that the PF had trouble stabilizing the aircraft roll attitude. It's difficult to determine whether this contributed to the pitch up and eventual stall but the original pitch up command may have been inadvertent while struggling to level the wings.

Under normal law, which pilots are accustomed to flying, the FAC calculates the amount of aileron deflection required to turn the amount of lateral sidestick deflection into a rate of roll with a maximum of 15° per second. In alternate 2 law the computer cannot make these calculations so it becomes direct stick-to-aileron control.

Additionally the stick does not provide tactile feedback as to how much force is required to move the control surfaces. With conventional flight controls "roll or pitch rate would more directly correlate with the force applied on the control wheel, and not the amount of deflection required."1

These things combined can result in the pilot over-controlling. The control inputs can get out of phase with aircraft movements resulting in pilot induced oscillation in the roll axis. This occurred in both of the above accidents.

It must be terribly disconcerting for a pilot when the A/P disconnects and they are handed control of an aircraft they fly every day, but doesn't respond the way they are used to. I'm wondering how much practice they get at flying in this configuration, either in a simulator or in the aircraft itself. Do most airlines flying FBW aircraft require this regularly? Does Airbus - or anyone else - recommend any amount of further training or practice? Have these recommendations changed in light of the accidents?

It appears in both situations that the PF had trouble stabilizing the aircraft roll attitude.

Note that roll control is secondary when recovering from a stall.

Restoring normal pitch and roll, he stresses, are "of secondary importance"

The situation required that the pilots heed the stall warnings, be aware of the stall and put the nose down to trade altitude for airspeed.

Have these recommendations changed in light of the accidents?

You can read the recommendations in the official accident reports. These usually explicitly state what such changes should be. I believe it is very rare (except when investigators disagree) for regulators, manufacturers and airlines to ignore any such recommendations.

The Indonesian report lists in some detail the actions taken by the airline and includes an Airbus article "What is a stall? How a pilot should react in front of a stall situation". It also includes some guidance issued by Airbus which includes recommendations concerning upset training in various control laws

After that how much opportunity do they get to practice this skill?

This depends on airline (and relevant regulators) more than on manufacturer. Upset recovery is probably something that all pilots should be trained in, and maintain familiarity with, regardless of who manufactured the aircraft.

Air France 477 was in a fully developed stall. In a normal flight attitude. All the way from 40,000 feet to the surface of the ocean. The aircraft was falling like a leaf from a tree, with an angle of attack of 90 degrees. No buffeting. Yes they rolled back and forth, again like a leaf in the wind.

Before AF 477, stall training focused on recognising the onset to stall, and how to prevent getting into one. The F/O who got the plane in a stall in the first place was partially guided there by the flight director: the BAE found in it accident report that Airbus avionics did not present vital flight information that the computers were aware of. Direct AoA indication to the pilots may have saved them, because they never realised they were in a fully developed stall. They were startled, alarms were going off, and they could not find a visual clue in their instruments what was happening.

Pitching the stick down would have initiated recovery. But the air data computer stops sounding the stall warning at AoA over 70 degrees because that can't make sense, right? at under 60 knots of forward speed. When they lowered the nose, the airflow came within the awareness region again and the alarm sounded. Pulling the stick back stopped the alarm sound. What would you have done, had you been the pilot?

They fell all the way into the ocean, not being aware that they were in a fully developed stall, because that was not incorporated in their flight training. Or in anyone elses - it has only recently been added to the training requirements. Alaska Airlines is one of the first to have added this facility to their simulator.

Your question is a valid one, but is based on only a small part of the chain of events that led to the crash:

The captain was asleep when this happened, and locked out of the cockpit. He could have saved the situation, who knows? One of the blessings of middle age is less fight-or-flight and more of a clear head. Or just a fresh pair of eyes coming in and assessing the situation anew.

The Air Asia captain did realise they were in a fully developed stall, and immediately pitched the stick forward. He was an ex military pilot. The issue there was:

Recommendations were made for Airbus to change flight information presentation. From Cockpit Standard 1.7 onwards, direct AoA information is presented when the automation switches off. See below under Update. Recovery from a fully developed stall will be part of the curriculum soon, and this is a challenge by itself. You've pointed the nose down, and you're diving straight down at mach 1. Please now gently pull the nose back up while keeping lower than N = 2.5 so that the wings don't snap off.

Asked the question to an A380 pilot who upgraded from A330/A340 recently. According to him:

When I did my initial type rating on the Airbus it was rare to find the aircraft in normal law. The thing is most of the complex failures such as dual hydraulic failures, emergency electrical configuration, multiple ADR failures, dual radio altimeters etc always has an effect of downgrading aircraft control laws. The first time I flew in alternate law was in FFS (Full flight simulator) session 3. This is where the instructor forces the aircraft into alternate law to show you how it works. So, for 2 hours you fly in alternate law (no autopilot or flight director). It is pure raw data flying, doing ILS approaches and visual approaches. The whole point of the session is to get familiar with the reconfiguration control laws.

The sessions that followed also contained many scenarios where the aircraft went into alternate law. As I said complex failures always equal flying in alternate law and in the A320 the aircraft will always reconfigure to direct law when the gear is down (if in already in alternate law). That is the story of the one and a half month long conversion course. So, how about after that? As airline pilots we go back to simulator training once every 6 months so it is very frequent. My very first recurrent after the initial did include a complex failure. The dual radio altimeter failure. In this failure the aircraft goes into direct law once the gear is down and you have to fly a raw data approach in instrument conditions. So, do we fly alternate law every 6 months? The answer to that is no. We have so many failures that we need to practice so we cannot ram in failures that make the aircraft go into alternate law every time we come for recurrent. But the training is so frequent that it hardly poses a problem. There will always be alternate law here and there. And we do upset training which is now compulsory. It is always done in alternate law. 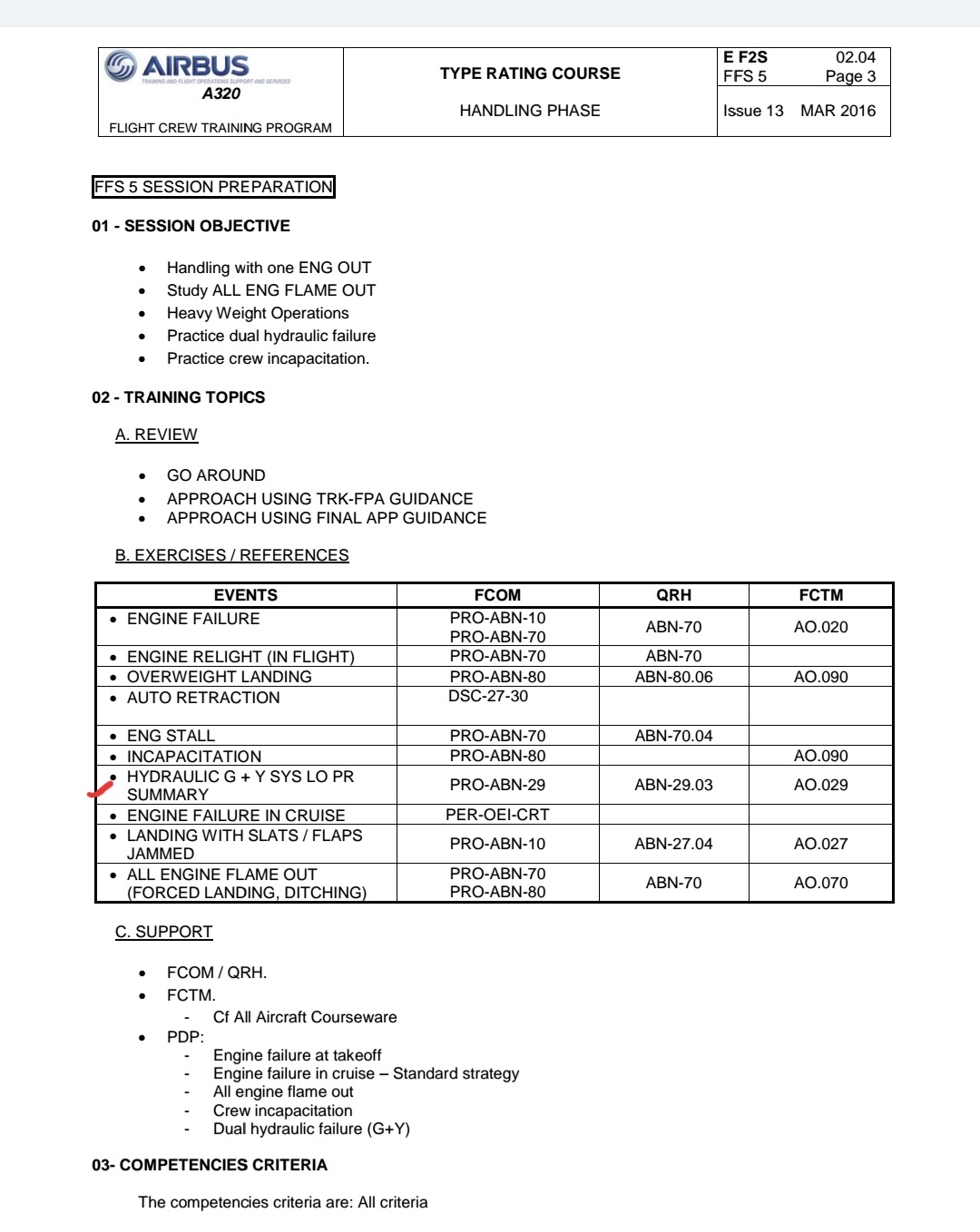 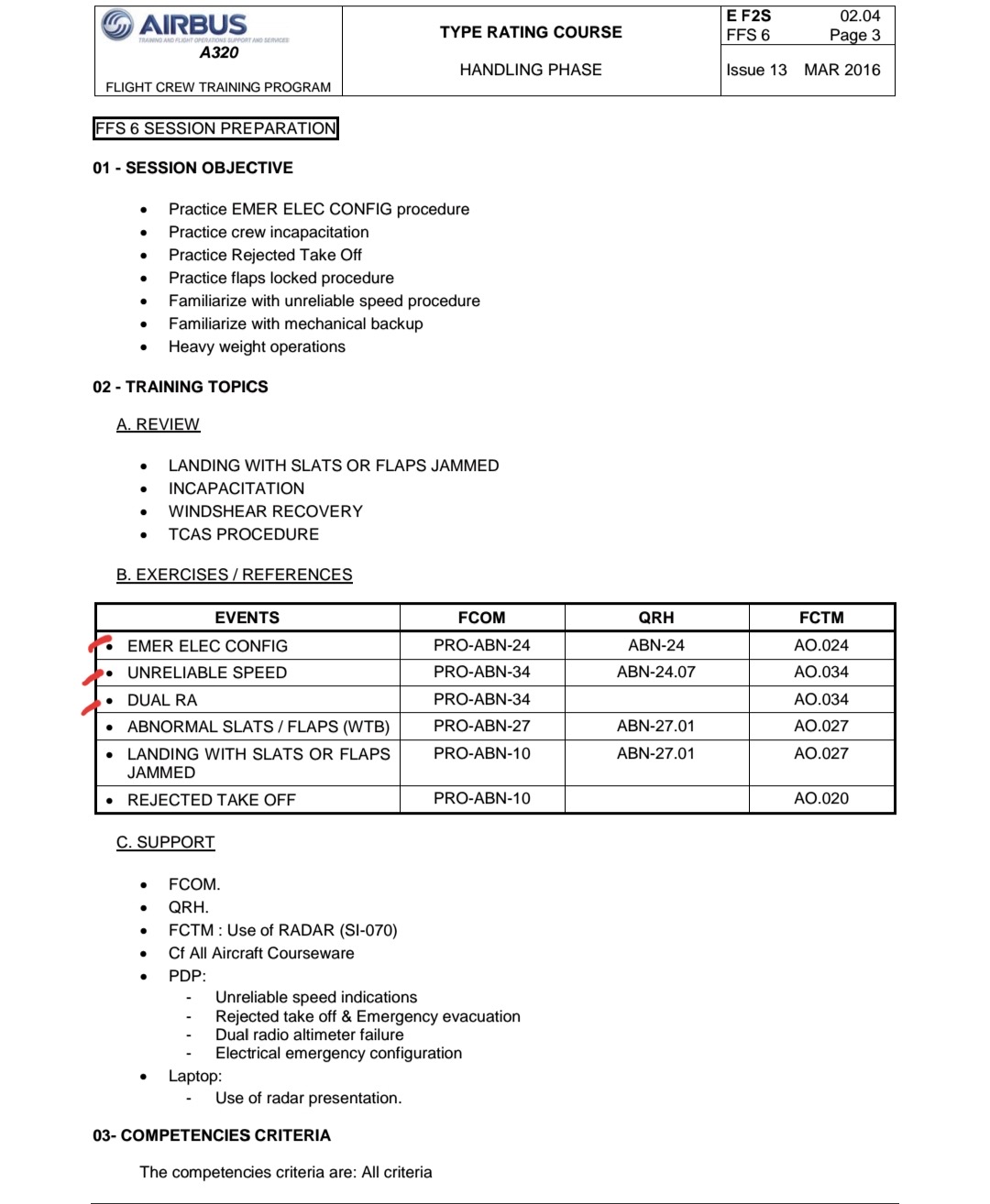 Here are Airbus approved A320 type program FFS 5 and FFS 6. I have marked in red those failures that put aircraft in a reconfiguration law.

I also want to comment on one of your statements.

Before I came to Airbus I flew in my airline's regional operations. I flew Dash 8s into small airports with short runways with little to know approach guidance facilities. So, we did a lot of visual approaches and a lot of hand flying. For me, personally, flying the Airbus is the same. I have never felt anything that different. And flying in alternate law is a non event. I have not found the response of the aircraft any difficult to handle. You should not make a statement based on what is written. You have to have first hand experience before you say something like that. One of the most important skills of a pilot is his ability to adapt. I mean in the Dash 8s, sometimes the control cable rigging makes aircraft controls heavy and sometimes weird which makes each air frame unique. But as a pilot you handle the situation and fly the aircraft. Flying in alternate law should not be a problem for a trained pilot. And we cannot really use one accident or actions of one set of pilots and use it to define the whole piloting community.

Not the answer you're looking for? Browse other questions tagged flight-controls airbus fly-by-wire af447-accident or ask your own question.

9
Have there been any studies on which fly-by-wire pilot interface is preferred; rate control or direct control?
13
How are Airbus pilots trained for using the mechanical backup control systems?
8
What has Airbus done to address the dual input issue?
6
What does rudder input control in normal law in an A320?
11
Why did AF447 never return to normal law?
12
What is the Space Shuttle's command law?
2
Does joystick position control bank angle in some Airbus aircraft? And what happens when the pilot deflects the joystick when wheels are on ground?
5
Why do the A320’s primary flight controls have hydromechanical backups only for the rudder?