How does aileron reversal work?

As I understand it, aileron reversal can occur in two regimes of flight, high speed and near stall.

You can kind-of visualize this by thinking of a wing operating on the backside of the lift curve.

Aileron reversal at high speed, (again, as I understand it) can occur when the wing isn't stiff enough tortionally to prevent twisting about the aircraft's lateral axis when a control input is made. Some old warplanes had this characteristic at high speeds.

For example, the pilot makes a control input to the left. The right aileron deflects downward, and instead of raising the overall AOA of the wing, it lowers it because the aileron acts like a trim tab, twisting the wing's leading edge downward.

Your question is asking: If the control reversal velocity is calculated to be higher than the divergence velocity, (When the wing breaks apart), how then can control reversal take place in flight?

The answer would be when it occurs near a stall.

Control reversal speed is way lower than divergence speed. It may actually be lower than operating speed for some aircraft, which is why they have inboard ailerons/flaperons and/or use spoilers (that don't suffer control reversal) for roll control at high speeds.

Control reversal (at high speed; there is also control reversal at stall, which is different) occurs because the force generated by ailerons twists the wing sufficiently so that the aileron starts to act more like a trim tab. For that the wing has to flex, but it does not have to flutter at all.

Spoilers act closer to the wing mid-chord, so they don't twist it much and thus don't suffer reversal. In fact they twist the wing a bit, because pre-stall lift acts more forward than post-stall lift, but this twists the wing forward and thus further reduces the lift, so still no control reversal.

At high speeds a large downward aileron deflection can cause the laminar flow to separate from the top of the wing and become turbulent. At this point the wing essentially ceases to produce lift, whereas the other wing has an upward aileron deflection and continues to produce lift. This rolls the aircraft in the opposite direction than intended. I have experienced this in a C152 aerobat while recovering from a steep dive, there is some buffeting and a slow roll opposite to the control input.

I have also heard that at trans-sonic speeds control inputs can precipitate shock waves on parts of the airframe that can cause control reversal without laminar flow separation. But I have not experienced this in a C152 (yet).

There is another effect that would have been the cause of the tail of the space shuttle to have a reverse effect above about mach 1.5, where the front of the tail is blunt, designed to deflect hot air during re entry. See diagram. 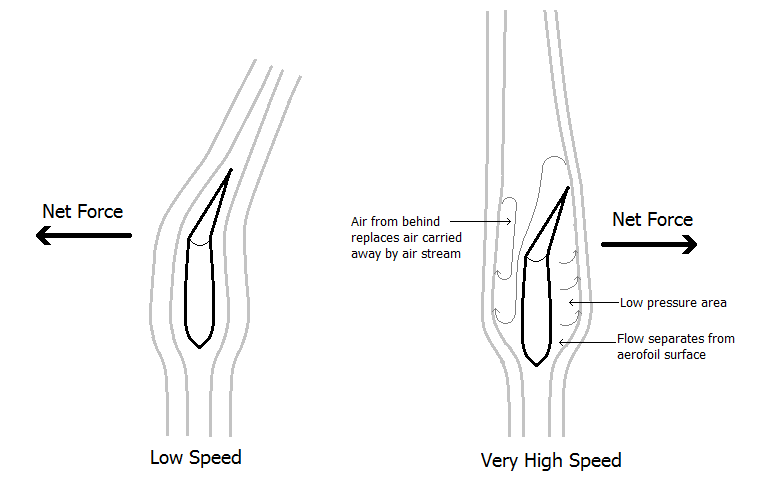 9
OV-10 Bronco using airbrakes to fight adverse yaw?
7
How is the area of flaps determined?
11
Why are the spoilers used as the backup controls instead of ailerons on the Boeing 777?
6
How does a delta wing deal with supersonic boundary separation?
1
What determines the maximum speeds for a particular aircraft?
4
Do high-speed ailerons help with the roll rate control in non-FBW?

8
Is flutter speed always smaller than divergence speed for aircraft?
2
How to calculate aileron deflection for achieving similar roll dynamics at thin and dense air?
1
How to define the aileron's deflection angle (in the Laplace domain)?
14
How do paraglider controls work?
7
Why does the A320’s maximum allowable aileron deflection decrease, rather than increase, when the flaps are extended?
8
Just how do the underbanking and overbanking tendencies work?
0
If pilot use rudder to roll the aircraft at high AOA in the F4 Phantom then one aileron from one wing and one spoiler from other will be deflected?
10
Why do the ailerons of this flying wing work oppositely compared to those of an airplane?
5
Ground effect and Lift coefficient