What regulations or procedures address runway-taxiway interference for aircraft with large wingspan?

Are there cases of airports where a large wingspan aircraft on a taxiway can interfere with another aircraft on the runway?

Or do the airport design parameters take care that the largest wingspan aircraft on a taxiway will still never infringe on a runway's safety zone?

How about taxiway-to-taxiway interference? Is that precluded by design itself for worst case combinations or can there be cases where two large wingspan aircraft on two taxiways may interfere?

If so, is it the pilot's duty primarily or the tower's to ensure that interference does not occur due to conflicting wingspans of aircraft on different taxiways?

Are taxiways with potential for such interference separately indicated on the airport taxi charts?

Yes this can and has happened with what is considered a "super-jumbo" like the A380 or the 747-8 (Aircraft Design Group VI aircraft).

The FAA must issue waivers to airports to legally accept these types of aircraft due to spacing rules that are in place. A lot of larger airports built quite a few years ago didn't have the foresight to handle aircraft of this size, so special precautions have to be taken when handling those types of aircraft. For class VI aircraft, an airport must have taxiways that are 100' wide and runways that are 200' wide. Note though that an A380's wingspan is 262', so even on a 100' taxiway, the wings hang over 81' on either side.

Usually ground controllers get special training to handle the larger aircraft and maintain separation, but its even a problem for the ground crew before talking to ground control because there are quite a few notable incidents of aircraft being backed into other aircraft.

Here are some interesting reads:

Airport design standards try to to take into account the operation of airliners with large wingspan. Basically, the standards like the FAA Advisory circular 50/5300-13A - Airport Design and ICAO Aerodrome design and operations require certain minimum separation distances between the runway/taxiways based on the wingspan of the aircraft being operated there.

The aircrafts are separated into different groups based on their wingspan. For example, the following table is from the FAA AC 150/5300:

The ICAO definitions are more or less similar. Based on the most demanding dimension (like wingspan) of the aircraft expected to be operated in the airport, the airport facilities can be determined. For example, the minimum recommended separation distances can be determined from the following table: 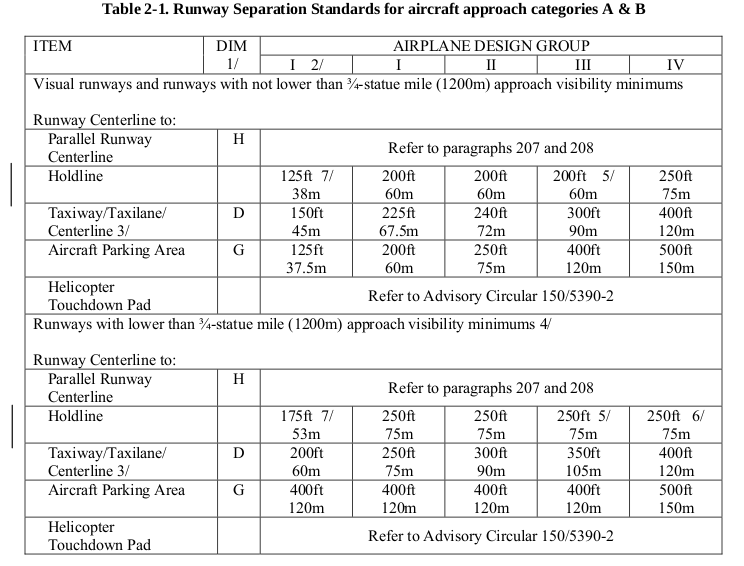 In case the airports with lesser separation distances (as is the case with many older airports) , the aircraft can still be operated if it is found that the separation doesn't affect the normal operations. From ICAO Aerodrome design manual:

Another point to note is that the dimensions of aircraft also affect the airport aprons, building separation etc.

One of the most important problems during the induction of A380 was that the aircraft, with a wingspan of ~262' is at the extreme end of the dimensions considered for airport design; in fact, the airport dimensions was an important design consideration in the A380. Still, it was expected that the A380 operation will be severely restricted because of its dimensions.

To this end, the A380 Airport Compatibility Group (AACG) was formed to study the capabilities of airports to handle the superjumbo. It identified airports that can accommodate the A380 during normal operations, and those airports which were considered for planned alternates for A380 (in which case, the A380 is required not to disrupt the normal operations).

The group found that the operations of A380 in runway/taxiway would affect other traffic due to the huge wingspan of A380. From the draft document, which considered the ICAO standards:

The A380 wingtip will infringe the runway strip with a distance of 7.5 meters. Operations on the runway should therefore temporarily be halted until the A380 has left the parallel taxiway.

In the end, this required the regulatory authorities to give waiver for operation of A380 in airports not meeting the spacing requirements. This is not unique for A380. Boeing also considered operations from existing airports for 747-8 which has a larger wingspan compared to 747-400. The result is either a waiver or changing the operational procedure; Boeing notes:

In some cases, airports can accommodate the airplane on the airport movement areas through the use of operational procedures. For example, when a 747-8 is taxiing, operations on a parallel taxiway that is built to less than the required separation standards may be limited to airplanes with a smaller wingspan in order to maintain adequate separation clearances.

Basically, Boeing concludes that operating 747-8 is possible in all airports operating 747-400 (whose dimensions are used in planning separation distances in a number of airports) by getting a waiver after carrying out a study or a change in operating procedures.

Aircraft manufacturers are aware of the issues due to separation requirements as the wingspans get ever larger. For example, Boeing is offering an option of folding wingtips in the next version of 777.

Well, runway-taxiway interference would not exist because the airports are designed with enough buffer space in between to keep the aircraft separated. The only place that that might occur is when at least two of those aircraft land at an airport that is not designed for them (Like that would happen anyways).

Taxiway-taxiway interference is very similar to the one above, and only very rare occasions would have that occurring.

Basic answer then: No, it would not occur. However, if need be, the airport does issue warnings and prohibitions on what airplanes can use a certain taxiway like on the top right corner on the diagram of KATL Airport

Not the answer you're looking for? Browse other questions tagged taxiing airport-design or ask your own question.

12
What are the curved centerlines at taxiway intersections for?
10
What are the requirements for an aircraft to be allowed to perform fast taxi runs?
9
What is the maximum slope for taxiing aircraft?
6
For designing a runway, what are the largest cargo airplanes in use?
6
What is the proper technique for using rudder pedals with toe brakes?
13
Does the “follow” instruction give an aircraft clearance to turn onto a taxiway and/or cross a runway?
0
What is the area between the taxiway and runway shown in the picture below?