Was the Space Shuttle landing sequence executed manually or automatically?

I was motivated by another SE Aviation Question where the complex set of manouveres needed to land the space shuttle is described to ask the following question:

Is the landing handled manually or is there an auto landing system? I suppose there is a high fidelity simulator to train all this on?

I wonder if that simulation engine has gotten into any of the enthusiast flight simulator software?

How does the space shuttle slow down on the re-entry, descent, and landing?

1. Did the shuttle have or use autoland?

The space shuttle did have autoland capability, in theory. When the shuttle was being developed, it was imagined that flights could last so long that human pilots might get rusty, or have their ability to function under gravity impaired due to muscle atrophy from extended time in micro gravity.

Unfortunately, testing autoland on the space shuttle was a bit risky. If anything went wrong, the shuttle has no ability to disengage and go-around, and it might be too late for a human pilot to intervene and still make a safe landing.

They did try evaluating an incomplete implementation of the autoland on STS-3, where the lineup, final approach (outer glide slope), and preflare maneuvers would be performed by the autopilot, at which time the commander would take control and complete the landing.

The result was one of the worst landings in the history of the program. The autopilot was unable to maintain a stabilized airspeed, at first closing the speedbrake completely, then opening it again until airspeed was low, then closing again at 4000 feet which caused the orbiter to be too fast by the time commander Jack Lousma took over. He didn't really have enough time to get a feel for the aircraft or make corrections, so it hit hard and fast.

Afterwards, it was decided to discontinue testing of the autoland system, although the implementation was eventually completed.

Development of an automatic approach and landing system was terminated indefinitely due to the inability to implement an FAA [Federal Aviation Administration]-like powered aircraft certification program for an unpowered glider like the Space Shuttle. That is, an automatic system cannot be reasonably certified for an aircraft without a go-around capability in the event of an autoland system failure, because the only recourse in the Shuttle is to land rather than to execute a wave-off maneuver as in a powered aircraft. The practice of having to salvage a good landing out of a poor approach is not professionally accepted airmanship.

Further, the STS-3 experience was classified as a “late-takeover” action in which a failure of the autoland system in even closer proximity to touchdown could result in an upset too late in the landing phase to be reasonably recoverable. "Monitoring" the approach versus actually "controlling" it induces a time lapse in the mental-to-physical control conversion process which increases in criticality for manual takeover as the aircraft approaches touchdown. An automatic failure on the IGS, with no recourse for a wave-off, would be unsafe compared to a totally manual- controlled approach.

The quote is from NASA Johnson Space Center Oral History Project where Jack Lousma gives a great description of the flight and landing a little less than half way down the page.

The Columbia Accident Investigation Board Report did recommend testing the autoland system, but to my knowledge, it never was.

Just to clarify, the autopilot was used for most of reentry on every flight, but I believe your question was specifically about the final stages of flight and landing.

2. What sort of simulator was used for training?

So the shuttle was hand-flown for landing (a fly-by-wire system, so it's arguable that there's no true manual mode), and that means pilots have to be trained.

They were actually trained in several different simulators. There was SAIL (Shuttle Avionics Integration Lab) where they did serious integrated systems and software testing.

There were also fixed and motion-based simulators in Houston. These were collectively referred to as the SMS (Shuttle Mission Simulator). These were used for training for all phases of shuttle flights, not just landing. They were particularly useful for simulating contingencies, like an RTLS abort (return to launch site). It's similar to how simulators are used in the aviation industry to train for scenarios which would be too dangerous to train for in a real aircraft. 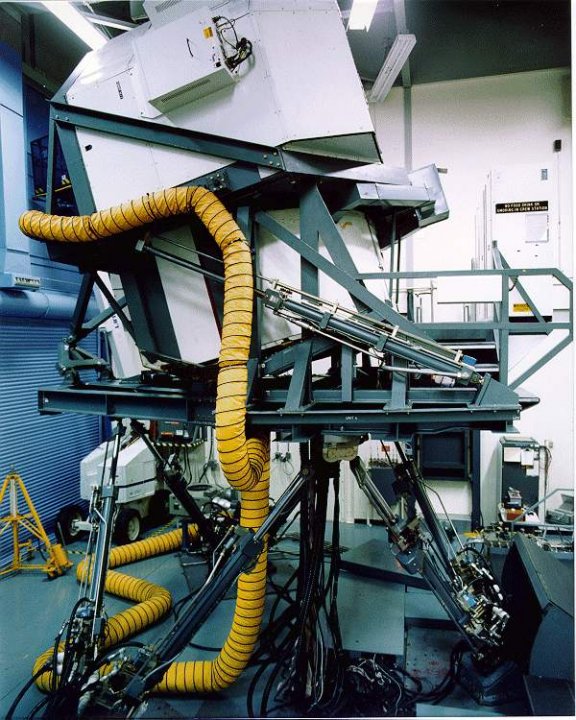 For nominal conditions, the best simulator for landing the space shuttle was actually another aircraft referred to as the STA (shuttle training aircraft). This was a modified Gulfstream II which would fly with its main landing gear lowered and thrust-reversers engaged to simulate the high drag profile of the orbiter. The left side of the STA cockpit was built to mimic the layout of the shuttle, including the heads up display. 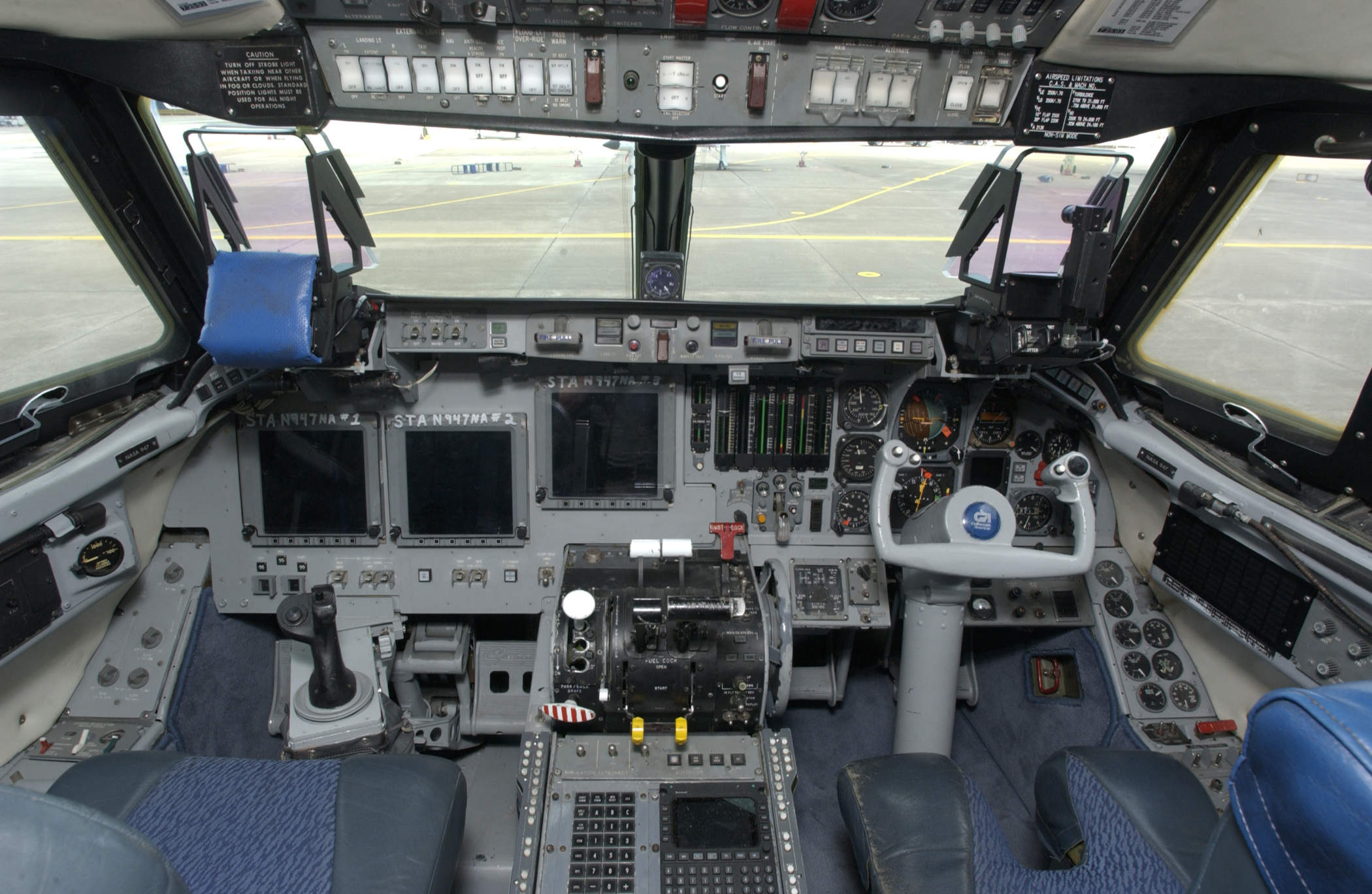 Images from the STA's Wikipedia page

The STA was used for both training shuttle pilots and for evaluating weather conditions at landing sites on launch and landing days.

Lastly, there was also an on-orbit simulator that the pilots would use for practicing in the day or two before landing. It was basically a laptop with special flight-simulator software.

3. Is the simulator available in any flight simulators?

The answer depends on exactly what it is that you're asking. The actual software used on shuttle computers (written in HAL/S) is ITAR restricted, so it is not available to the public. Sadly, even the on-orbit simulator has never been released, to my knowledge.

However, there are several simulators which let you fly some or all of reentry and landing to varying degrees of realism.

Interestingly, the motion-based simulator from the SMS was donated to the Aerospace engineering department of Texas A&M, and it was discussed making the simulator at least partially available to the public. Unfortunately, I think they ran out of money to actually put the thing together and run it, so it's effectively just sitting in boxes in a room somewhere. They have a facebook page, but it's been a long time since I've seen any progress.

Both manual and computer control were possible in all phases, but re-entry was done by computer (with manual control available as a contingency, and tested once on STS-2), while approach was almost always done manually. No landings were ever done by computer. STS-3 used the autopilot (with some issues) on descent.

STS-53 was to have tested autoland, but the test was cancelled.

After Columbia, further modifications were made so that with the installation of a cable to connect certain systems, the shuttle could execute re-entry, descent, and landing without pilots. This enabled remote control of operations that would otherwise require switches to be thrown on the flight deck.

After the reentry burn, most of the atmospheric reentry and descent was handled automatically. (Exception: STS-2 was flown manually for much of the descent to collect additional data on the re-entry behaviour in various conditions.)

As for the landing, shuttle commanders were encouraged to take over at the end, after the speed had dropped below Mach 1, to get the "feel" and land manually.

I have heard that the entire landing could be performed automatically, except for the lowering of the landing gear. For some reason this has always been under crew control. (I can't find a reference for this though.)

For simulators, I assume a ground simulator was available. However crew also practiced on modified Gulf Stream aircraft that could be set up to fly with a similar approach to the real shuttle.

Not the answer you're looking for? Browse other questions tagged landing flight-simulator space-shuttle autoland or ask your own question.