Slats can be extended automatically depending on dynamic air pressure. Fly-by-wire systems provide flight envelop protection when flaps/slats are extended but I cannot find any reference of fly-by-wire feature such as auto-retractation/extension of flaps/slats depending on angle of attack or air-speed.

Do systems to automatically retract/extend flaps depending on flight conditions (speed, angle of attack,dynamic pressure,...) exist?

It can be much simpler than that.

The aerobatic glider Mü-28 has a symmetric airfoil with 20% flaps, and those flaps are automatically set as a function of the g-load experienced near the center of gravity and the dynamic pressure. Basically, a spring-suspended lever with a mass at the end creates the necessary control input. In straight flight they are deflected downwards which makes the airfoil more suitable for gliding, in a zero-g parabola or in a knife-edge flight they are moved to 0° deflection, and in inverted flight they show a negative deflection angle. If flight speed increases, the deflections become proportionally smaller, thus preventing overloading the airframe (which is dimensioned for ±10g, so overloading it is hard anyway). 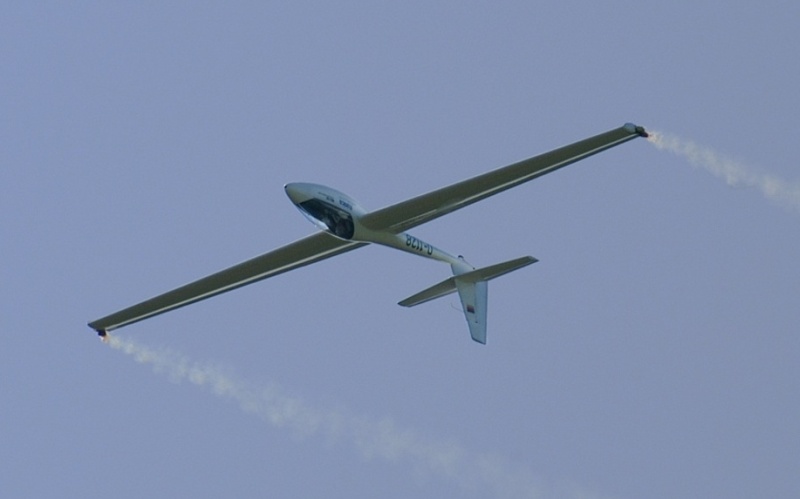 Mü-28 in inverted flight (picture source). Thanks to the low sun the rear part of the fixed wing section is illuminated so the negative flap deflection is easy to discern.

This innovative automatic flap system fitted to the Mü28 was developed at the Flugwissenschaftliche Vereinigung Aachen under the project designation FVA-21, controlling the position of the flaps, depending on the speed and the load factor, so that the aircraft flies with optimal angle of attack in all flight conditions.

Scheduling the maximum deflection angle with dynamic pressure as an overload protection can thus be done in two ways:

The flaps/slat electronics unit provided a trailing edge flaps load relief function that protected the flaps from excessive air loads. That function was operative at the FLAP 30 and FLAP 40 positions only. The flap lever did not move, but the flap position indicator displayed flap retraction and re-extension.

When the flaps were set at FLAP 30, the trailing edge flaps:

• retracted to FLAP 25 if the airspeed exceeded 176 kts

• re-extended when the airspeed was reduced below 171 kts

When the flaps were set to FLAP 40, the trailing edge flaps:

• retracted to 30 if the airspeed exceeded 163 kts

• re-extended when the airspeed was reduced below 158 kts

Of course the flaps are controlled by the computer in a number of combat aircraft.

Actually automatic flaps are not new. The Breguet XIV had them in the lower wing. Basically, the flaps (called 'Equalizer flaps') were hinged to the rear spar and were maintained at a given angle using rubber cords, which permitted them to vary with wind pressure.

Not the answer you're looking for? Browse other questions tagged aircraft-systems flaps or ask your own question.

31
Can you fly an airplane at a 90° roll angle without losing altitude?
19
What causes aileron and elevator flutter?
2
Does the flap settings for the best lift/drag ratio change with speed on the Diamond DA20-A?

12
When does a 'flaps/slats misconfiguration' warning sound during takeoff roll?
1
Is it normal procedure to lower flaps at high altitudes?
6
Why does the A320’s maximum allowable aileron deflection decrease, rather than increase, when the flaps are extended?
0
Why does the DHC-6 pitch down when the flaps are retracted, rather than up?
11
Why are Krueger flaps called flaps and not slats?
18
Why is the DC-9-80 ("MD-80") prohibited from taking off with a flap setting between 13 and 15 degrees?