How did this incident report detailing a flight taking off and landing at Glasgow result in safety changes at a distant airport?

While reading this report detailing a tire failure and actions taken, I noticed a peculiarity: The flight took off and landed at Glasgow without continuing to Malta (its intended destination) yet the Actions taken says:

For flights from Malta, takeoffs to be carried out with flaps 5 only.

How would the operator find an issue with flights out of Malta for a flight intended to land in Malta, that never did (by virtue of returning to Glasgow)? Is it policy or practice to check all aspects of the flight including those that were not reached due to the incident? Was something not mentioned likely to have been found at Malta (perhaps damage from a previous takeoff)?

accident-investigation incidents aaib
Share
Improve this question
edited May 12 '20 at 14:07

The precise truth cannot be known without consulting the authors of the report. However, assuming it was not a typo, there are several contributing factors that may lead to this result.

Primarily, aviation is a very conservative business, and every opportunity to mitigate risk will be taken.

In this instance, not only did the aircraft lose a tire, the tire also damaged the hydraulic "A" line, and the flaps.

The main issue to address was the tires themselves, but it was noted that the tire blowout appeared to occur at "rotation", which puts the greatest stress on the main gear tires.

While the airplane may be about to take wing and unload the landing gear, the moment the aircraft's nose rotates up is the moment of peak main gear loading. The weight of the aircraft is no longer supported by the nose gear, and not yet supported by the wings. The elevator pushes the tail and empennage downward in order to raise the nose, which further burdens the main gear. And during takeoff, the aircraft flaps will be lowered to aid in generating more lift while still at low air speeds, BUT, lowering the flaps aerodynamically causes a nose-down "moment", which makes the elevator's job that much harder, and that additional force is also transferred to the main gear at the moment of "rotation".

A couple ways to help alleviate the burden on the main gear are to not drop flaps as much, and to "rotate" more gradually. Also, since flaps were damaged in the tire incident, having your flaps tucked up higher puts them less in harm's way of a possible exploding tire.

But why that directive in Malta?

According to the link below, the main runway at Malta Luqa Airport is 11627 feet long (3544m), which is fairly long as runways go, so an aircraft can take its time getting airborne if necessary.

It's not the longest runway around, but it's longer than necessary for most commercial aircraft, especially at sea level. Malta is also a very flat place, with its highest point only 253m above the Mediterranean. (830 feet) This makes it a reasonable place to use a procedure that would result in a longer take-off roll and more gradual climb (from the less-deployed flaps.)

So there are reasons it would possibly be more doable there than at some other airports. However, I think the dominant factor is this:

Boeing 737-33A, registration 9H-ADH, is a Maltese registration (as indicated by the 9H, and the aircraft belonged to Air Malta at the time of the incident.

I used the past-tense, since the current ledger of aircraft registered in Malta does not include that aircraft. In fact it was transferred (sold?) to Air New Zealand in 2008, and is now in Bahrain, to the best of my knowledge.

While I do suspect there is more to the story details than we are privy to in that one publication, it's my opinion, as a certified aircraft mechanic and persistent internet sleuth, that the change in practice was made as a matter internal to Air Malta operations at their home airfield.

Bonus: A photo of the actual aircraft, after the incident in question, sitting cordoned off, on the ramp at Glasgow International Airport (GLA). Click the link above the pic for a little more info, and additional resources. 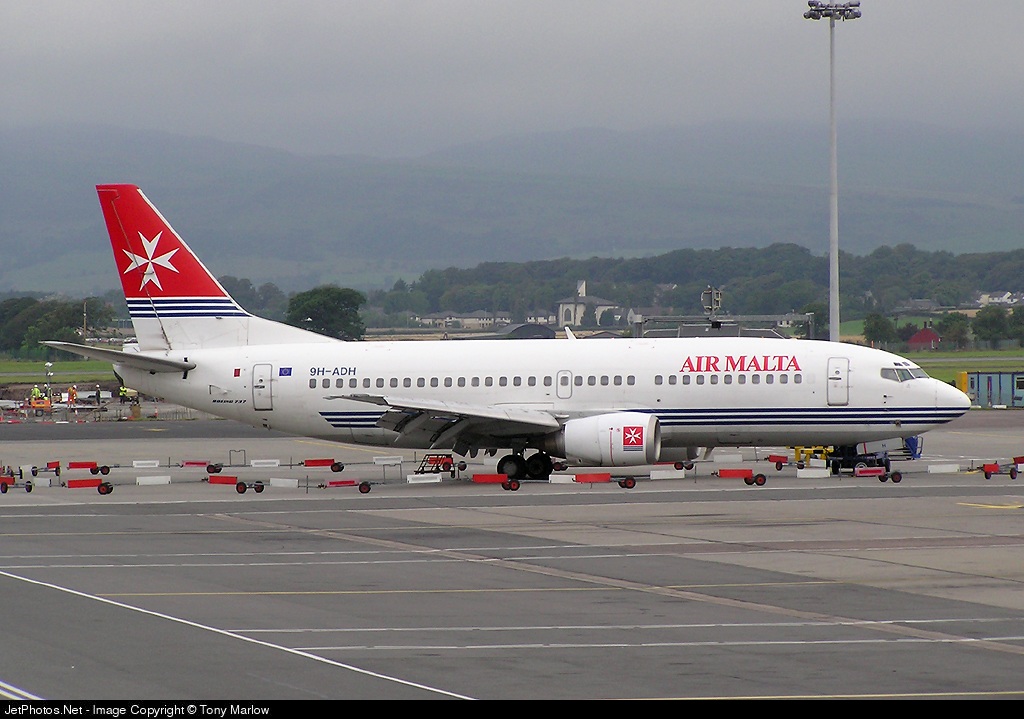 Not the answer you're looking for? Browse other questions tagged accident-investigation incidents aaib or ask your own question.