Why would maximum fly-time (endurance) not coincide with max L/D operating point?

This question is motivated by another SE Aviation answer where @Peter Kampf writes the following two useful bits of information:

Aircraft like to fly near their optimum L/D ratio, where drag reaches its minimum.

Observation aircraft which want to optimize flying time will fly slower that what optimum L/D requires, especially if they use propellers.

Do aircraft use the majority of their fuel to overcome friction?

I'm trying to understand this more: Why would maximum fly-time not coincide with max L/D operating point?

Is this something to do with the jet engine fuel consumption characteristic? i.e. Does the minimum fuel-consumed-per-unit-time point not coincide with the optimum L/D point? But if your payload is fixed, so is your lift & hence your velocity choice that gives you that lift right?

i.e. For a given payload, lift is fixed. For a given lift, minimum drag leads to max fuel economy? And max economy means max dwell time? What gives. 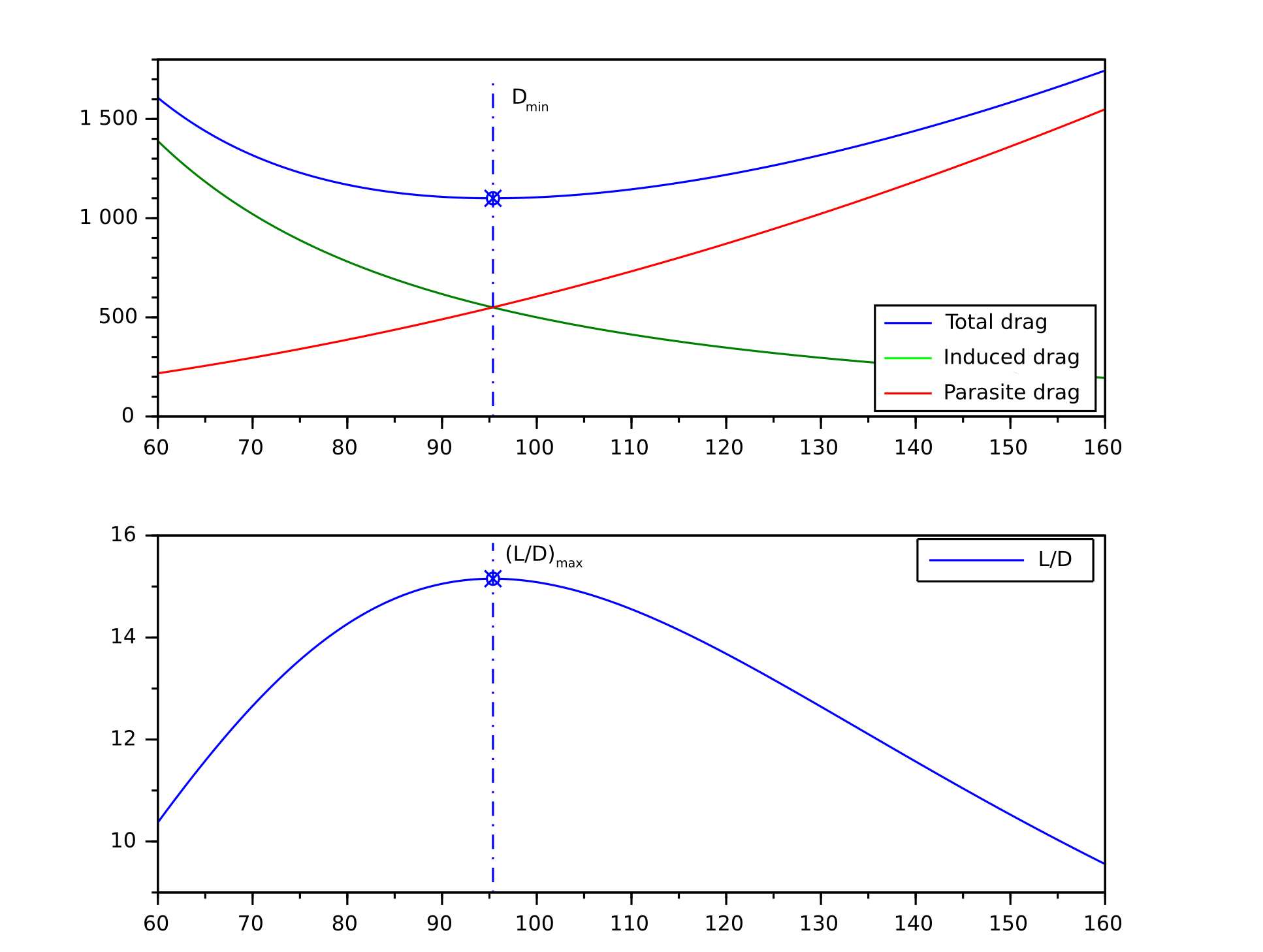 For simplicity I assume we can ignore the climb / descent / acceleration etc. for now. And only consider the level flight segment at fixed speed.

Consider a propeller aircraft in a steady, level flight. For determining the condition where the energy expenditure is minimum, we have,

is minimum. For steady flight, we have,

Thrust is a force that moves the aircraft. In steady, level flight, this is equal to the drag (if it is more/less, the aircraft will accelerate/decelerate). Power is the rate of doing work i.e. the energy consumed per unit time or rate of energy expenditure (by the a/c powerplant). This is why we are considering minimum power i.e. rate of energy expenditure for determining endurance.

The polar point for maximum flight time only coincides with the minimum drag point when engine thrust does not change over speed. This is approximately true for pure turbojets and rockets. If thrust creation involves accelerating a big mass flow of air, the declining thrust with increasing speed for a given engine power shifts the optimum to lower speeds.

For a more general optimization goal we need to minimize not drag, but fuel flow. Since thrust varies with fuel flow for propeller and bypass engines (as it does for ramjets), this can be calculated when we model thrust $T$ over speed $v$ as $T \varpropto v^{n_v}$ with $n_v$ a negative number for propeller and turbofan engines, and positive for ramjets.

For optimum loiter speed, the induced drag of a propeller aircraft needs to be three times as big as the zero-lift drag. As induced drag drops with increasing speed, only for turbojets will the optimum polar point for maximum flight duration be equal to that at the lowest drag.

Not the answer you're looking for? Browse other questions tagged aircraft-performance drag aircraft-physics or ask your own question.

1
What is the differance between gliding for maximum range and gliding for maximum endurance?
29
Could there ever be a fully solar powered airliner capable of transatlantic flights?
30
Why are propeller engines uncommon on airliners?
16
Why do airplanes have to retract landing gear?
12
What is a ramjet?
17
Why is max endurance different for jet and props?
11
Do aircraft use the majority of their fuel to overcome friction?
6
Is the maximum lift-drag ratio found at minimum drag?
10
What is the maximum theoretical lift of a plane as a function of engine power and surface of the wings?
5
How significant is the lift induced drag contribution to total drag of aircraft at cruise speed?
See more linked questions

3
How to calculate the airspeed for maximum specific range?
23
Why is the ratio maximum range speed/maximum endurance speed the same for any airplane?
17
Why is max endurance different for jet and props?
8
Why do different aircraft have different maximum operating temperatures?
1
What are the typical max range and max flight time (endurance) Mach numbers for the A320?
9
Why would you NOT lean on takeoff with a Lycoming engine?
3
How can I calculate the maximum range of an aircraft descending with power (not gliding)?
1
Why isn't Vy lower than the speeds for best L/D ratio and best glide ratio in an airplane with a piston engine and a variable-speed prop?
8
Why is the maximum endurance for a piston aircraft at sea level?