I've seen several times on shows on television, and even talking to older pilots, where they will tell me that old planes were "over-engineered" to add some margin for errors on the designed engineering calculations. Of course, no specifics are given, and so I was thinking in this current age of super-fast computers, better wind tunnels, new software tools, and decades of actual experience, when people design new planes, how much of a margin to they design into them now?

It seems like confidence in computer modeling seems to be pretty high, and "over-engineering" seems to have typically meant making things stronger than they "need" to be, more reinforced elements, all things which add to cost and weight of an airplane which are factors that are at odds of profitability and performance.

You are right that older designs used (and needed!) higher safety margins. I would, however, not call this over engineering. But that is besides the point.

The biggest advances have been made in materials! Not just new alloys, but much better quality control in manufacturing. The aluminium sheets and slabs you would get from a factory 50 or 80 years ago had much greater variations in local strength, and in strength between different production batches. The same goes for fasteners, forgings, whatever. Computer-controlled manufacturing and the relentless effort to improve quality and consistency have made this possible. Only wood is still the same as it was then, but Basil Bourque is right: Processing the wood has also improved by leaps and bounds.

But now consider what we do when we stress a wing: We use the maximum static lift coefficient, add aileron deflection and use that bending moment at v$_A$ to size our wing spar. We do this by applying a safety factor of 1.5 (§25.303). For parts with a more error-prone production process additional factors need to be added (see §25.619).

And now consider what happens in the real world: The dynamic maximum lift coefficient, which does not obey the rules and regulations imposed by the FAA, will easily be 1.3 times bigger than the static lift coefficient used for stressing the wing spar. In tests up to 150% have been achieved. Makes you think how sensible that safety factor really is. While we understand the static loads very well (because they are easy to study), dynamic and fatigue loads still happen to surprise the engineers from time to time. A little extra margin sometimes can be quite useful.

On the Eurofighter the structural safety factor was indeed reduced to 1.4 with the reasoning that more precise modeling and simulation would allow to use a smaller margin.

The legal "over engineering" factor has not been changed since 1970:

Over-engineering is a concept in value engineering, not aircraft design. In general, over-engineering means making the design more robust or unnecessarily complicated than necessary. In that sense, I would say that aircrafts are/were rarely over-engineered. Older aircraft were more conservative in determining the loads.

In structural design of any aircraft, the designer tries to make the aircraft safe in a number of steps:

The process followed now is pretty much the same; however, the engineers are able to determine the loads acting on the structures to a greater precision compared to the earlier times and are able to optimize the structure accordingly. The safety factor and taking of conservative material properties have not changed much.

Though one can say that, for example, making the wing spar thicker than necessary to account for unforeseen loads is good from structural point of view, it is bad from performance/weight/fuel consumption views. The problem is that if the designer knowingly pads the safety factor more than necessary, he's actually reducing the aircraft performance. As a result, over engineering (more than design or regulatory requirements) is plain bad design and is not recommended.

In short, the process haven't changed over time- it is simply that the tools have improved and more data is available for use.

There are other issues here- aircraft like F-35 Lightning II are repeatedly called over-engineered, but the point is that they were designed for the given specifications. For example, F-35 was required by design to perform the tasks of a number of aircraft and as such is having a significantly difficult engineering period.

On a different note from the other answers, there's been a few articles indicating that newer 'bone' like designs are being considered and implemented by companies like Airbus.

Airbus has partnered with Autodesk to rethink the design of those lowly partitions. Its new partition debuted today at the Autodesk University conference in Las Vegas and, thanks to 3-D printing and some wild new algorithms based on slime mold and bone growth, it weighs in at just 66 pounds. Airbus’s current partitions weigh 143 pounds apiece. “Our goal was to reduce the weight by 30 percent, and we altogether achieved weight reduction by 55 percent,” says Bastian Schaefer, innovation manager at Airbus. “And we’re right at the beginning.” http://www.wired.com/2015/12/airbuss-newest-design-is-based-on-slime-mold-and-bones/

There are even some pretty impressive futuristic designs: 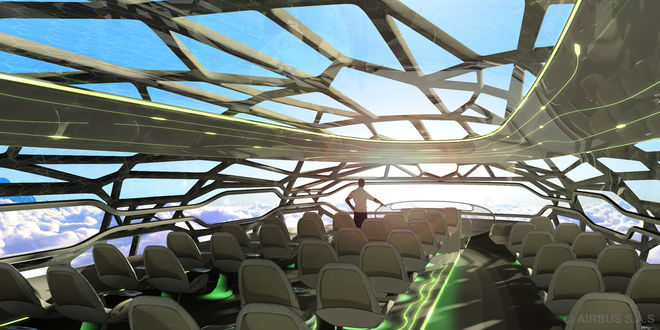 I think calculating stresses and loads are no better now than 50 years ago. Engineers understood forces and physics no differently then than now. They just used a slide rule instead of software, but they got the same results. Instead of modeling things, they build real life ones and tested them. They got the same answers. They built a wing, bent it till it broke and discovered its strength and were able to build one to any load specification needed without overbuilding it. Modern software just gets results cheaper and faster.

The big differences between then and now are materials and system evolution. Not calculating forces and stresses.

5
Was the adoption of conventional tailplanes as 'everyday aircraft' inevitable, or are there other designs that can be just as good?