What is the meaning of the crosshatch marking on altimeters?

What does the crosshatched area on an altimeter tell you? It's only visible when below 10,000 ft indicated altitude. Can't be terrain awareness, a lot of terrain around here is over 10,000 feet.

This sample altimeter display from the FAA manual on flight instruments shows the crosshatched area: 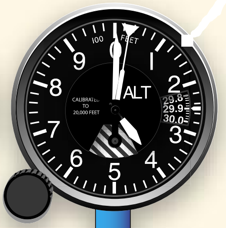 Here's the accompanying text from the manual where it points out the crosshatched area:

Crosshatch flag: A crosshatched area appears on some altimeters when displaying an altitude below 10,000 feet MSL.

It looks like the crosshatch (or barber pole) indicator doesn't have a consistent meaning (a similar marking is used on some airspeed indicators, by the way). I found several different examples of when it can appear:

The only source that gave any explanation is the last one:

When the altitude is below sea level the barber pole is no longer visible. This is provided to avoid the error of reading –1,000 Ft. as being +10,000 Ft.

After following a bunch of links and skimming some discussion forums, my conclusion is that @RalphJ is probably right: manufacturers added the flag to highlight that the aircraft is at a relatively low altitude, in a way that's much easier and quicker for the pilot than 'parsing' multiple hands on the altimeter face. And the fact that different sources give different altitudes highlights an important point: it's always a good idea to read the handbook or manual for all your instruments because you can't assume that everything works the same way in every aircraft, even something as 'simple' as an altimeter.

It replaces to 10 thousands digit, evidently because X9000 has been found to be easier to read than 09000 or just blank space before the 9000. That crosshatched area would also scroll to display "NEG" if the altimeter is displaying an altitude below zero feet (i.e. Below sea level or below the reference datum plane).

Crosshatch also in some of pressurized aircafts predicts the caution to pressurize or de-pressurized while ascend or descend respectively. The indicator in some aircraft automatically pressurize the aircraft using electrical signals as precautionary to pilot and passenger safety to get into a partial or total hypoxia.

Not the answer you're looking for? Browse other questions tagged altimeter or ask your own question.

6
Why are/were three-pointer altimeters so prone to being misread?