Could Concorde have used swing wings?

Would it have been possible to equip the Concorde with swing-wings to help with lift at lower speeds? The delta wings on the aircraft worked well at high speeds, but it took a long time for it to achieve takeoff speed. A swing-wing would give it the aspect ratio for low speeds and delta form for the high speeds.

Actually, the Boeing design for the SST (Super Sonic Transport), the Boeing 2707 had a swing wing (swing wing was the hot thing during that time). It is instructive to look at what happened to that design.

The engines were carried on the stabilizers. During the development Boeing had significant problems associated with the swing wing mechanism. Concerns about stability and payload capability lead the design to be lengthened and added canard to the front to meet rotation requirements, though the new design 2707-200 kept the swing wings.

However, these changes did little to solve the problems. When kept near the centerline, the hinge mechanism interfered with the undercarriage. The hinge mechanism was so heavy that it negated the advantages of swing wing, leading to a very poor payload to weight ratio. Studies indicated that the aircraft would run out of fuel halfway across the Atlantic, essentially killing the project.

Due to this, Boeing decided to use a fixed wing platform in its next iteration, the 2707-300, which looked quite similar to Concorde. 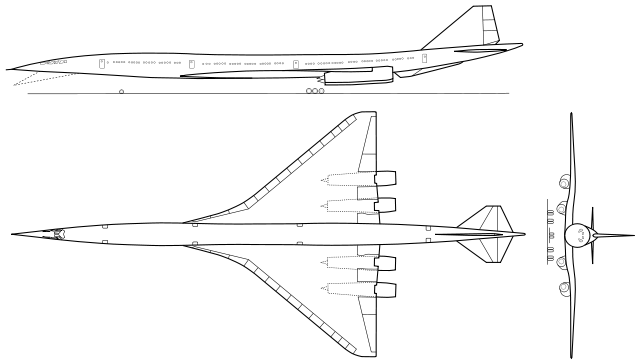 Well, it would help with low speed lift, but it would have the following problems:

So, if the Concorde would have had swing-wings, it would have been a radically different airframe. However, because of the difficulty of making a swing-wing mechanism for such a large aircraft (Existing swing-wing aircraft are either small compared to airliners or have plenty of room for the mechanism) and the many more forces involved with this, it would not have been a good idea.

Not the answer you're looking for? Browse other questions tagged aircraft-design supersonic concorde or ask your own question.

1
Why has the rest of the world gone after delta wings while not the USA?