What is the difference between a fix, a waypoint and an intersection?

It seems these terms are used interchangeably. Are they the same thing? Do they all refer to the points in space that are given 5-letter names?

No, they are not interchangeable and indeed, have well defined meanings.

A fix is an arbitrary point in space used to establish current position calculated by referring to external references. You take a fix to determine where you are now. A fix might be permanent, for example a compulsory reporting point, or it might be determined by the pilot in advance in order to fly a non-airways route (e.g. when flying VFR) and then checked along the way using dead reckoning and reference to external systems or features to check that the plan is being flown accurately. It might also be requested by ATC, e.g. "report when overhead the railroad yard" or calculated to establish where you are, e.g. taking a fix from an astrolabe on a night oceanic crossing.

A waypoint is fixed point in 2D space (latitude and longitude) used to define points along a route. They are named, and are referenced in a plan. You fly from one waypoint to the next, along a route. A waypoint is where you are flying to. It is normally positioned where there is a change of course or altitude.

These are the navigation positions given the 5 letter names you ask about. 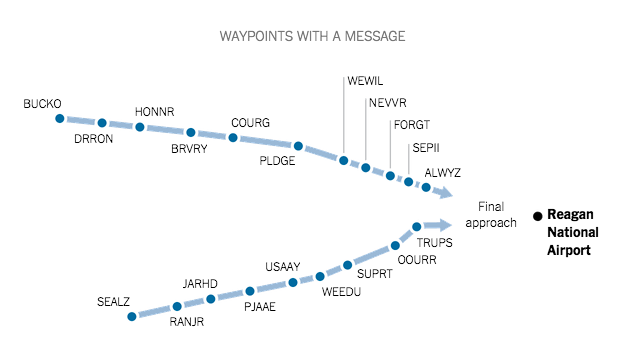 Now sorry about this, but having said they are not interchangeable, it's not that simple. A waypoint is also a fix (a fix is any 2D point). But you do not call a waypoint a fix. A fix is a 2D point which is not a waypoint, but is used for navigation. A fix might be also be a lat and long defining the beginning of an arrival or departure procedure where you leave or enter an airway.

An intersection is also a fix, but it only exists to define where two airways cross (or where any other 2 lines cross, e.g. the 170 degree and 046 degree radial from two NDB beacons) so is called an intersection, not a fix.

In that sense, they are all fixes but the name has meaning.

The definition of fix above by Simon is "close" but not perfect. The definition appears to be implying that the fix just for "own ship", that is, my present position. The fix IS an arbitrary point in space. The definition should stop there. A fix MAY be used if needed to help establish your current position or may even be the estimate of your current position. You may want to get a fix on some other entity such as a coastline feature or another aircraft or vessel. For example, one generates a RADAR fix on an aircraft by knowing the location of the RADAR antenna, the azimuth angle the RADAR was pointing when "painting" the aircraft/target, and the duration of time for the RADAR signal to travel to and return from a reflecting aircraft. Thus a "fix" may have nothing to do with establishing one's current position.

A fix is a point used to check longitudinal position along a linear course, in formal use a fix is determined by intercepting specific ground based navaids. Named fixes are those marked on charts and are included in FSS and ATC databases. Named fixs improve communication and if used for changing route segments they have been checked for signal strength and altitude requirements. The fix can either be the interception of an off airway nav signal, the use of DME, or the intersection of two airways.(such as VOR/VOR radials, DME/DME, VOR/DME, NDB/VOR) A fix can also be a "facility" which is the actual navaid installation. eg the point of station passage when directly over a VOR. The key bit that makes a fix a fix and not just another point along the way is that position between fixes is only an estimate while the fix is a point with a positive signal change, like breaking a ribbon at a finish line rather than just estimating 100 yards have passed. This goes back to non-radar ATC where they spaced aircraft based on estimated speed and time with an E6B and they could only be certain of the aircraft position when the aircraft reported positive crossing known navigation elments. Even older inertial RNAV required occasional fixes to re-calibrate periodically. (similar to holding straight and level for a moment to check the heading indicator against the compass) Similarly, fixes are needed for determining with certainty the latest start of climb that will ensure obstacle clearance at a minimum gradient. Important to the concept is that the course is not defined by the navaid that is providing the fix; one provides longitudinal position and the other provides lateral position and both positions are relative to the location of a local facility that is attached to the ground. Because of this last bit [with sufficient altitude] you could fly along a traditional airway route without determining any enroute fixes.

An intersection is where two airways join or cross, most of these are also used as a named fix [or waypoint depending on the type of airway]. Although there are a few airway crossings without a name, likely because they have not been evaluated or flight checked for turning radius obstacle clearance or minimum crossing altitudes. (These would only be used for changing airways at the discretion and calculations of the pilot, and possibly would not be approved as part of an instrument flight plan. Though I have not tried to file with such an intersection so this is speculation.)

A waypoint is determined the same as any other GPSS point along your way, unlike a fix there is no positive signal change or other physical property unique to that location, rather it is just another calculated point, generally defined in terms of latitude and longitude. Unlike fixes these calculated points are nessessary to define both the route and position along the route.

Waypoints can be defined adhoc by the user or named and published. Published waypoints have additional metadata, they may be flyby or flyover, and have a certain associated navspec so the nav computer can set the correct course deviation sensitivity based on the phase of flight: enroute, terminal area, final approach, or oceanic. (full scale deflection of 2nm, 1nm, 0.3nm, and 10nm respectively. But know this is basic view, full navspec is more complex, because bureaucrats.) With GPSS the nav computer calculated a precise position continuously along the way so there isn't such a need for fixing important locations, for example the gradient and start point of a climb can be accurately calculated anywhere along the route rather than being a fixed point for all aircraft. So waypoints are more for defining a route, and published named waypoints are a convenient radio shorthand(rather than listing full latitude and longitude) and pre-arranged backup for managing traffic in the case of lost radar or radio.

The criteria for setting accuracy tolerances is also quite different. Often a fix tolerance is given in angles(so fixes far from a navaid will have a wide tolerance) while a waypoint tolerance will be a radius around the point calculated from a given navspec.(categories of RNAV equipment sensitivity and reliability) With DME fixes, slant range causes the fix to shift laterally as an aircraft descends or climbs(ie in a hold over a fix) but a waypoint does not shift.

Not the answer you're looking for? Browse other questions tagged navigation terminology waypoint or ask your own question.

7
What is the difference between fixes and waypoints on an arrival plate?