Can a helicopter operate continuously in a small, enclosed, sealed environment?

Can the helicopter maintain flight?

I believe it might, for a very short time, until the air starts circulating in a (relatively) stable manner, causing the "natural flow" of air to be already descending when it encounters the rotor disc, therefore reducing lift to nearly nothing.

I'm curious what an expert might think. If this is off-topic, mark it as such and I'll delete the question. Adding more useful tags I don't know about might also be helpful. :)

A helicopter develops lift by accelerating air downwards through its rotors. This relies on the air above the rotors being slow enough for the rotors to accelerate that air enough to provide sufficient lift. When hovering in still air, the incoming air has zero velocity relative to the helicopter. While of course the air is conserved, in a large volume of air, the downwash is able to diffuse much more, and much of it does not immediately circulate back up above the helicopter.

If the helicopter were enclosed in a sphere, the smaller the sphere, the less the air would be able to diffuse. The downwash would circulate back to the top of the sphere, where the rotors would take that air in again. The rotors would be less effective at accelerating the air that is coming in with significant velocity, just as a propeller develops less thrust with increasing forward speed. Successful hover would depend on the helicopter being able to develop lift at a rate of circulation where the air can slow down enough for the rotors to be effective.

This seems like a experiment manageable enough that someone could try it at home...

A serious danger to helicopter flight is flying in a vortex ring state, causing a stall.

Essentially, the helicopter descends into its own downwash. When the condition arises, increasing the rotor power merely feeds the vortex motion without generating additional lift

Several helicopters have crashed as a result.

This state would be very quickly established for a helicopter in a confined container. 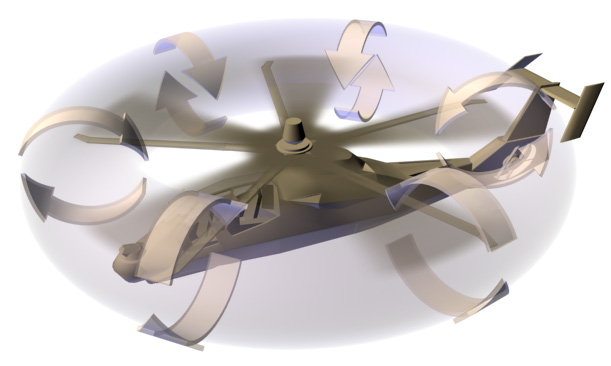 Indoor model helicopters would not be able to fly if the answer were no.

Of course it can, but the enclosure must be big or small enough to avoid a toroidal vortex from developing around the rotor. To summarize my answer, three conditions make it possible:

Case 1 is trivial, so I dwell here on case 2: If you have flown an indoor model helicopter, you probably know that it is not advisable to come too close to the ceiling: The helicopter will become unstable and will be sucked right into it. This is caused by the ground effect (or better ceiling effect in this case): The efficiency of the blades increases the closer they are to a horizontal surface and the helicopter needs less torque for the same lift. Once the rotor head is touching the ceiling, you need to cut power almost to zero to free it again. The same effect can now be used to fly in the constrained space because it will prevent the toroidal vortex of the vortex ring state from developing.

Now the explanation to case 3: If you insist on not touching any surface, the vortex will soon develop and reduce lift. How long you can hover depends on the air volume, and there is a minimum when the diameter of the enclosure is approximately twice the rotor diameter. Once the diameter becomes smaller, the vortex will again be inhibited, and when the enclosure is small enough the rotor will look like a fan in a duct. Now again less energy is needed for lift - just enough to maintain the necessary pressure difference through the rotor disc.

I should add that this solution will best work with a co-axial rotor and no tail sticking out at one end.

In the movie 1982 Deadly Encounter, if my memory serves me correct, there is a scene where a Hugh 500 flies inside a large hangar. No CGI in ‘82, don’t believe any special effects were used, so yes indoor flight possible. My thought being the accelerated air above rotors would somewhat balanced by ground effect.

28
What is ground effect?
34
Why would a helicopter climb in a spiral?
24
How do modern helicopters tackle Vortex Ring State?
11
Can planes take off from a treadmill?
2
Can an aircraft or helicopter run into its own wake vortex?
4
Is there ground effect flying below an infinite 2D plane as opposed to above one?