Why does the Canard Rotor Wing use a Canard?

Why does the canard rotor wing (CRW) use a canard? The CRW is a helicopter using engine exhaust to drive the rotor. The exhaust can be used in the normal way to drive the aircraft once high enough speed has been reached. Why can't the CRW use a tail instead?

The Canard rotor/wing demonstrator, later called the X-50 Dragonfly was a Stop-Rotor Rotary Wing Aircraft made by Boeing and DARPA to demonstrate the principle that a helicopter's rotor could be stopped in flight and act as a fixed wing (like in movie The Sixth Day). 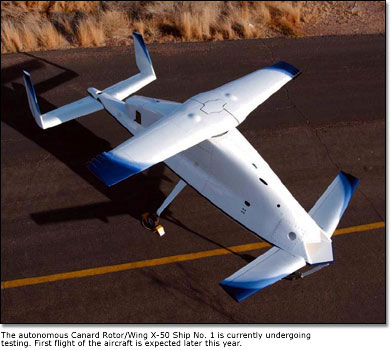 The canard is used in case of Boeing X-50 Dragonfly in order to overcome the transient aerodynamic loads that occurred during conversion from rotary to fixed-wing flight. During transition from rotary mode to fixed wing mode, the rotor is being unloaded and the aircraft has to produce enough lift. The designers used both a canard and horizontal stabilizer to overcome this problem.

During development, analysis and testing indicated that the X-wing design encountered high transient aerodynamic loads during the conversion from rotary to fixed-wing flight. The CRW design addresses this issue by generating positive lift on both the canard and horizontal tail during conversion. By deploying the flapped canard and the full-flying horizontal tail, enough lift can be produced to support the weight of the aircraft, and the main rotor can be completely unloaded throughout the conversion maneuver.

The aircraft never made a conversion flight and the program was canceled.

28
How does a coaxial rotor helicopter achieve yaw?
3
What is the drag of helicopter rotor at jet speed?
4
Can a contra-rotating helicopter simply tilt its entire rotor set instead of using a cyclic?
2
Why do No Tail Rotor (NOTAR) helicopters use an enclosed variable pitch fan?
7
Why weren't the rotor tips of the Djinn directly fed from the turbine's exhaust?
2
Why does the Apache create much more rotor noise than the A-129?
5
Why aren’t there any lifting-canard airliners?
4
Does a tandem ultralight need flaps on the rear wing if the front wing has flaps?
1
Is there a way for the helicopter rotor to get its power half by wind, half by engine?