What causes descending aircraft to make a noise like a giant blown bottle?

I've lived for years about eight miles NW of Boston's Logan Airport. Although I can't say we get a lot of aircraft noise, once in a while, due to winds or air traffic, there will be a long line of planes traveling right over my house, perhaps 6000-8000 feet up, descending into Logan. At night you can sometimes see three in a row, with a fourth one turning on its landing lights.

Most of the time the overhead planes sound mostly like a roar with some jet whine. However, once in a while a plane will suddenly start making a very strange sound like an enormous blown Coke bottle. Often the pitch will descend during a half dozen seconds, stay constant for a dozen seconds, and then rise again until the sound disappears.

My best guess is that the sound is caused by the pilot lowering the wheels during their descent, and that it only happens on certain models of aircraft. As the wheel well covers open, the air blowing across the wells sounds like that giant Coke bottle, with the pitch decreasing as the opening increases. On certain models, the covers will then close once the wheels are down, causing the pitch to go back up.

(Edit: it's been pointed out that gear isn't dropped until 2000-3000 feet, so in my case that isn't the sound. So, I've removed all those videos, cool though they may be.)

Is my guess right? What model/manufacturer of large jet would make this sound?

The sound is caused by airflow across holes on the underside of the wings of certain aircraft.

I too have noted the sound phenomenon that you describe. This video has a great example between 0:26-52 (link starts playback at 0:26 where the noise starts):

I will readily admit that this answer is mostly just a compilation of what I have learned researching this. Your question intrigued me and I've enjoyed learning about it!

As I discovered as I started researching this, many others are familiar with the noise as well. This article on Airliners.net had a lot of discussion about it, starting with a lot of interesting—but ultimately flawed—theories.

But, that thread led me to the answer to your question, which is: the sound is caused by the "circular opening used to equalise the pressure in wing fuel tanks", according to Euractiv.com

This article on AirportWatch further explains:

The Airbus 320 series of aircraft, [...] have been known for many years [...] to have a particularly irritating high pitched whine. This is caused by air rushing across the under-surface of the wing, where there are Fuel Over Pressure Protector (FOPP) cavities. This generates noise, in the same way as blowing air over the mouth of a bottle. Every A320 series aircraft emits a signature howling noise while approaching to land. It is heard most when the plane is travelling at around 160 knots, and the frequency is around 500-600Hz, which is close to peak sensitivity of the human ear.

That being said, there is apparently a fix to that problem, as both the aforementioned links describe. As Euractiv.com explains, the fix is a vortex generator:

a 5-cm triangular piece of aluminium sheet metal upstream of the two vents on each wing, in order to divert the air flow and stop the whistle. A decade of research went into the vortex generator, which stems from efforts to mask a similar whistle produced when air blows over the gun ports of warplanes.

This image shows both the FOPP hole, and the VG that softens the sound: 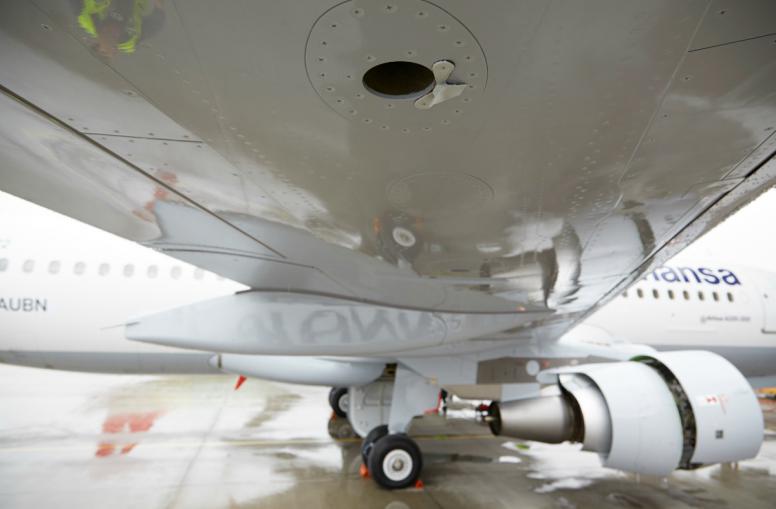 I think we just meet with the same curiosity I had. I hear that sound you describe also, and I already reduced the observation on it happening with Boeing 757-200's only. Like the ones operated by United. I happened to have found the answer, this is exact technical explanation.:

It's the 2.5 stage bleed on the PW 2037. This bleeds excess air from between the 2nd and 3rd stage of compressor blades for engine stability. It is a very loud sound similar to that of an compressed air gun used to blow off dirt from something. This sound is also very common when the PW powered 757 lands and comes out of reverse thrust .It's a different sound than a afterburner or jet exhaust because the air coming from is relatively cold. Air from jet exhaust or an afterburner is very hot and as it mixes with the cold air around it it makes a distinctly different sound than it would if it was cold. This subject has been discussed at length in the Tech Ops forum if you want more info.

It’s the speed brakes being deployed and then retracted.

The Airbus A320 series makes the exact sound you’re describing. Other medium/large types will make a similar sound.

The reason you hear it in roughly the same place is because approach controllers tend to follow a pattern of speed and altitude changes when sequencing aircraft towards the airport.

Speed brakes are deployed to expedite those speed and altitude changes.

This was what I was going to say immediately. I lived about the same distance from the south runway at Pearson and wondered what this was until I saw a 737 drop gear right above me.

I would describe the sound as a sort of "pfff-ewwwww" over the first second, and dropping in pitch until it ends in a constant low rumble after perhaps 5 seconds. Is that it?

Not the answer you're looking for? Browse other questions tagged noise or ask your own question.

0
Odd whining sound from planes passing over
1
What makes the "howling" sound from airliners?
47
If airplanes can't use reverse thrust in flight, what am I hearing?
12
What causes the distinct sounds of a jet engine?
3
What is a Fuel Over Pressure Protector?
1
How does engine noise change during descent / approach?

6
What is the maximum amount of noise an aircraft is allowed to generate?
8
What does aerodynamic noise of an airliner sound like in landing configuration?
5
What are the relative internal noise levels in various aircraft?
8
What is the major source of engine noise for non-propeller aircraft?
6
What causes noise when a plane is on the ground?
3
What is the definition of "Sideline" in reference to aircraft noise?
2
What causes the nose landing gear knocking noise on a Boeing 777 while taxiing?
7
What causes the horn-like noise during the start-up of some jet engines?