Is there a reason to be worried about go-arounds as a passenger? [duplicate]

The last night I had an "interesting" experience with an aborted landing, which was a bit dramatic for my liking. Heavy fog and darkness didn't help either. Pilot told us that the reason for aborted landing is a problem with navigation instruments.

Today I checked the flightradar24 data, which I've attached for your pleasure, but it didn't ease my worries since according to site's data the first attempt missed the runway completely. 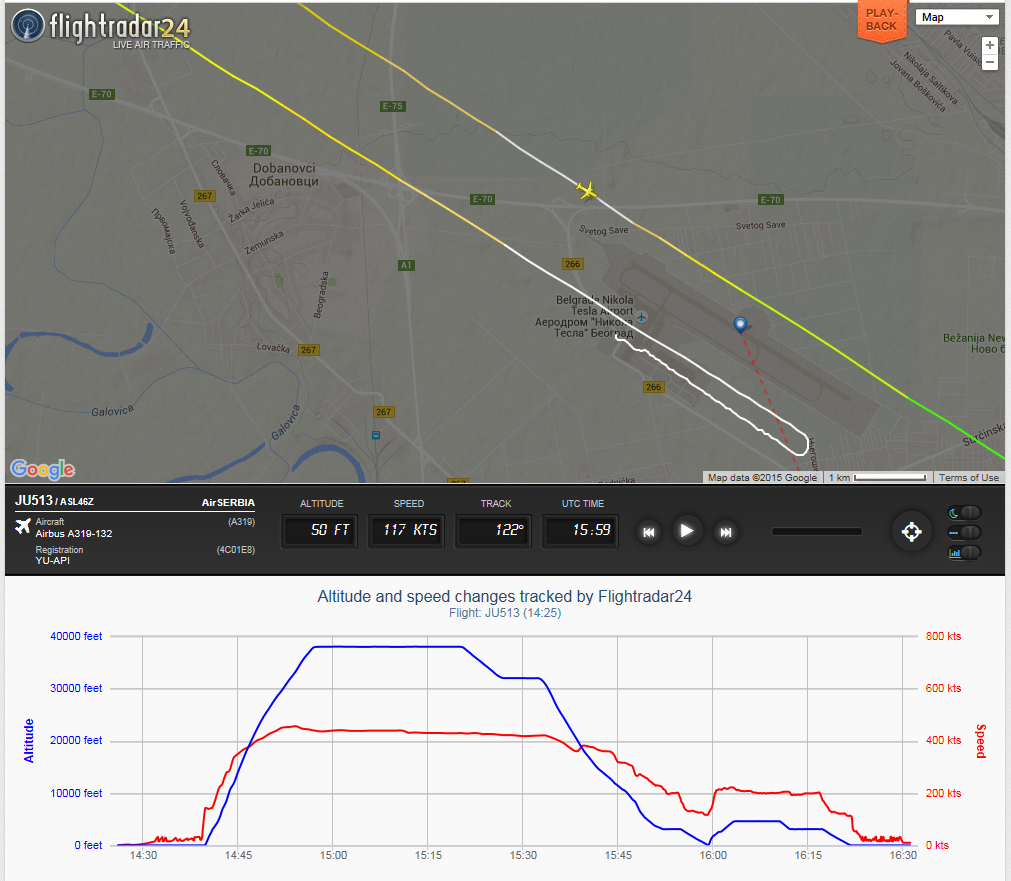 A go-around is nothing to be worried about as a passenger. What would be worrying is if the pilots elected not to go around when conditions warranted it.

The dark likely isn't an issue with this go around as approach lighting systems can become exceptionally bright when requested (to the point you'll need sunglasses to look at them if visibility is good). What was likely a factor was fog. Airplanes need a minimum amount of visibility to land and if conditions are marginal you won't really know until you fly the approach and either see the lights and land or do not see the lights and go around. For normal ILS approaches you would initiate this go around at 200 ft above the airport elevation. For very low visibility approaches this decision height may be 100 feet or less above the airport elevation.

The point at which you go around if you fail to see the runway environment is well defined and procedures ensure obstacle clearance so there is no danger as long as procedures are flown as published.

Another possibility for the go around could be the airplane in front of you failed to clear the runway speedily due to low visibility. If the preceding aircraft was still occupying the runway then your airplane would have to go around. There are a few other issues that could warrant missed approaches (e.g. windshear) but in all of these cases the go around is the safer option than proceeding with the landing.

Your pilots made the safe decision to go around and this is what you should take from the experience. There is zero reason to be worried.

To address your added specific questions:

The video below is an example of a very low visibility approach and you can see an example of how low the airplane can get before visual contact is made with the approach lights and runway. At predetermined points based on the aircraft, airport and crew qualifications the airplane would initiate a go around if these things were not seen. For standard ILS approaches this would be when the airplane announces "200 feet". For category II ILS approaches, it would be at "100 feet". In the video below a category III approach is shown which has an even lower altitude to initiate a missed approach.

Flightradar24 relies often on ADS-B transmissions from the aircraft. Depending on the aircraft the accuracy of the transmitted ADS-B position varies from very accurate to not accurate at all. This particular A319 belongs in the latter category; the source of the data was the Inertial Navigation System.

Quite common. Depending on the aircraft, the flight crew and airport navigation facilities the aircraft can land in zero visibility. Nikola Tesla airport has Instrument Landing System (ILS) CAT IIIb on runway 12 (where you landed) which means that the navigation equipment can support autolanding. In this case the decision height can be at the runway, the minimum visibility at the runway is 50 meters. At the moment there is no Notice to Airmen (NOTAM) published regarding maintenance of the system so I assume it is operable.

I don't know whether this particular aircraft and its crew are approved for ILS CAT IIIb operations.

If either the airport, the aircraft or the flight crew cannot support autoland, then the runway has to be visible at a predefined height. If the runway is not in sight at this height the flight crew will follow the missed approach procedure.

No there is no reason to worry. This is normal operation, it happens everyday somewhere in the world. The aircraft is guided by two independent guidance systems that cross check each other. If there is a discrepancy between the two, an alarm sounds and the approach is aborted.

Not the answer you're looking for? Browse other questions tagged safety airline-operations passenger go-around or ask your own question.

40
How common are cancelled landing attempts?
27
How does ILS (Instrument landing system) work?
19
What is an Inertial Navigation System? How does it work?

21
How are go-arounds safe with close parallel runways?
13
Why do airlines have intermediate stopovers with no passenger boarding?
21
Do multiple go-arounds on the same flight happen in commercial aviation?
22
What scientific evidence is there about the effectiveness of pre-flight walk-arounds?
16
Can a passenger force a Go Around?
4
Are go-arounds prohibited at St Barth (TFFJ)?
4
Questions about go around safety