Can someone/something other than the pilot trigger the ejection seat?

Let's say there was a two-person jet (take the F-15 for example) that was involved in some sort of accident in the air that incapacitated the pilot (unconscious but still alive) and left the aircraft unflyable. Could the copilot eject his fellow pilot in an attempt to save his/her life from the inevitable crash that would eventually take place?

Is there some sort of system in the aircraft that would do this automatically?

Seems like an messy problem to have. On one hand you don't want to be blasted out the windshield accidentally by your copilot or faulty computer system but on the other hand it sure would be nice to survive in the off chance you are unable to exit the plane yourself.

There is a switch which controls this and the default position is "both". If any handle is pulled (pull down over the face or the one between your legs), then both seats fire. If solo, the switch is turned to "solo" so that the rear seat is not ejected and the front seat gets to leave a little bit quicker. If the switch is left on solo, and both seats are occupied, then each crew member can eject on their own.

You would also have if set to "solo" with an untrained passenger in the back. You wouldn't want someone getting a bit excited and firing them both out of a perfectly working jet.

See this question about what happens, and this one to understand why you won't hit the canopy.

As far as I know, there is no computer controlled ejection system. I don't think anyone would trust it to know better than the crew when it's time to bail out.

Yes. In general, the Weapons System Officer (WSO) can initiate ejection sequence and usually has control over it (of course it varies from aircraft to aircraft). From the interview of LCDR Joe "Smokin" Ruzicka, a F-14 Radar Intercept officer (RIO):

Both crew member's [sic] relied on each other- even down to the RIO having control of the ejection sequence- because conventional wisdom said the pilot would want to stay with the jet until it was too late.

Automatic ejection systems are rare, because you want the pilot to have control over when to eject (automatic ejection is considered a bad thing). However, it is found in a few aircraft, like the Soviet Yak-38, a VTOL aircraft. Once the aircraft rolled past 60 degrees in case of engine failure, ejection sequence was initiated automatically.

Not really an answer to the text and intent of the question, but with regard to the question as asked in the title ("Can someone/something other than the pilot trigger the ejection seat?"), I'll share a story that a friend who flew AWACS told me:

He was flying somewhere in the Middle East, and a Navy jet pulled up close enough to wave at the AWACS pilots, who weren't particularly amused. Not knowing what frequency the Navy fighter was monitoring (if any), my friend in the left seat of the AWACS picks up his microphone, switches to Guard (which everybody monitors), and transmits something along the lines of, "Dude, we're putting out enough RF energy to launch your seat at that distance!"

The fighter peeled off in great haste.

So yes, something other than the pilot/s of the aircraft CAN potentially trigger the ejection seat. I don't know how often this sort of thing has actually played out, but it has got to be an "oh, ****" moment if/when it ever did.

The question as to whether other crew members can trigger the ejection sequence has been answered.
As to whether there can be automated systems that do it, the answer to that is a resounding "yes" as well.
The Yak-38 VTOL fighter of the Soviet navy had just such a system and they were considered for other types as well (but afaik never installed for reasons that will become clear).
This system worked. In fact it worked too good. It had a tendency to eject the pilot even when there was nothing wrong with the aircraft, causing more than a few aircraft losses and injured pilots as a result.
A system like that monitors the aircraft parameters and systems and when they go out of normal operational ranges for a certain period triggers the ejection sequence. With the Yak at least, it appears that putting the aircraft into a hover to land it would sometimes trigger the ejection, oops :)

Something — yes, albeit not intentionally in this case: There was an accident in Sweden some years ago, in which a Gripen pilot was blown out of his aircraft because his legs and flight suit, affected by some high-G turns, actioned the ejection handle.

See Wikipedia and the Official report from the Accident Investigation Authority (PDF in Swedish).

Added: This answer was based on advice I received that the SU27 had auto-ejection capability.

If the SU27 does NOT have auto eject capability then the crew members were extremely brave, regardless of what responsibility they did or did not have for the crash. I viewed a video of the crash and did a frame by frame examination from 1st contact with the ground by a wing until ejection.
The video speed was 25 frames per second.

The video was never "super clear" and became increasingly less so as the crash progressed (apparently due to the videographer attempting to not die).
From the time the wing 1st touched ground 4 frames (0.16S) elapsed until certain canopy motion was observable. It may have been starting to move for 1 to 2 frames before this. The canopy was well clear by frame 8 (0.32 seconds post contact) and one crew member ejected at frame 11 (0.44 s post contact). The aircraft was moving out of frame but it appeared essentially certain that a prior ejection had not occurred so the 2nd ejection probably occurred some time after frame 11 (after 0.44s post contact).

While ejection initiation would have occurred at some time before frame 4 when canopy motion was first noticeable it would almost certainly have been a very short period prior, so it is very likely that the aircraft wing had touched the ground at or before ejection initiation.

That's brave.
Also stupid, if you want to live.
But very brave.

This is a frame grab from a video about a Ukrainian airshow disaster when an SU27 crashed into the crowd with many fatalities. Both crew members ejected essentially "on impact" and I'm told that the ejections were automatically triggered. Both survived.

The ejection shown here obviously had to be preceded by a trigger, canopy eject, fire, ... sequence which I'd expect to last at least some "tenths of a second", so the actual decision point is uncertain. 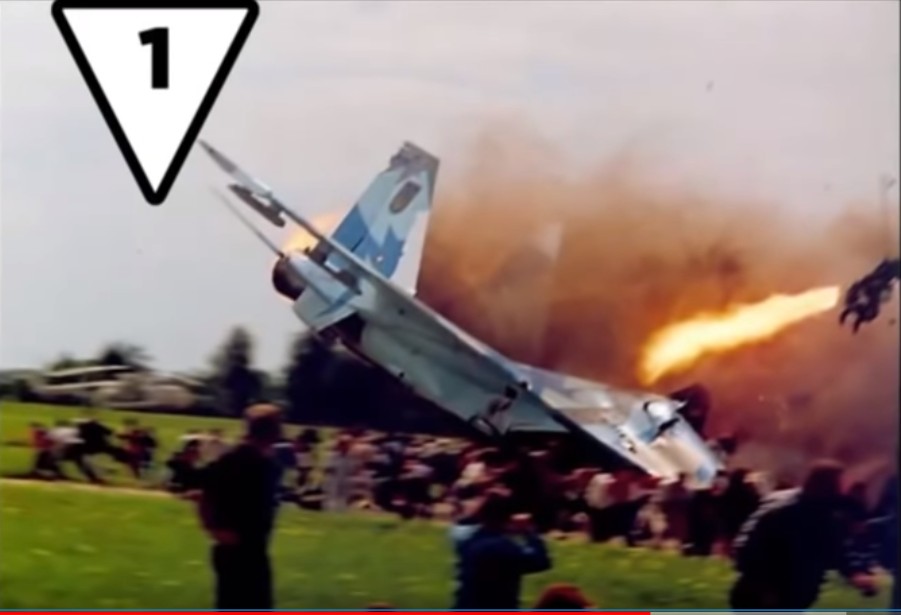 Not the answer you're looking for? Browse other questions tagged military jet fighter ejection-seat or ask your own question.

34
Why is the rear seat ejected before the front one?
47
What are these wavy lines on fighters' canopy?
6
Are there any 'smart' ejection seats?

18
What happens to the ejection seat after a pilot ejects?
31
Could someone really die in the way that Goose did in the movie “Top Gun”?
7
Can an aircraft be controlled after an ejection?
34
Why is the rear seat ejected before the front one?
10
Can jet fighters be made to be 2 or 3 times bigger than they are today?
12
Why does the F-111 have a capsule ejection system rather than a conventional system?
4
In a fighter jet, what is the average weight of the ejection system?
11
Why wouldn't a helicopter ejection seat eject sideways? Or forwards?
10
Is there any form of checklist that a pilot needs to go through before they use their ejection seat?
10
How easy is it to pull the ejection handle in a Rafale B?