As a followup to Why do turbofan blade tips exceed the speed of sounds while prop tips should not my question is: why have rings on propellers not been used to overcome this problem?

It seems from this site that they are produced at least for maritime use.

According to this site and this site it seems to have advantages and experiments have already been done as I can see from the picture. (I do not know how reliable it could be though)

Propeller rings (ducted propeller) have been used un aircraft, notably in some early VTOL designs, like the Bell X-22, XV-11 Marvel and also the RFB Fantrainer. 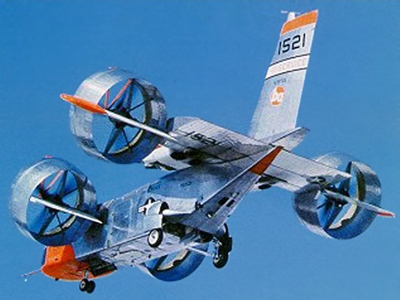 However, they are not widely used because of various other reasons like,

However, ducted fans are used in a number of small UAVs (in RC model jet aircraft, for example, in lieu of miniature jets), electric aircraft like the Airbus E-fan and also some dirigibles.

In case you are asking about connecting the propeller tips like in the maritime propller in the link, the resulting stresses at high speed would tear the whole assembly apart, causing more problems than it solves.

27
Would connecting propeller blades with a continuous ring reduce induced drag?
26
Why do turbofan blade tips exceed the speed of sound while prop tips should not?
12
Are ducted fans more efficient?

49
Why are push-propellers so rare, yet they are still around?
21
Are there design differences between propellers powered by air (wind-power) and propellers for aviation?
26
Why do turbofan blade tips exceed the speed of sound while prop tips should not?
4
Why don't contra-rotating propeller configurations with more than two propellers exist?
17
Why is max endurance different for jet and props?
2
How do I compute thrust of a rotor disk and the necessary power to drive it??
6
Guidelines for using a constant speed/adjustable pitch propeller
12
Why don't NK-12 powered contra-rotating propellers turn in equal rpm?
2
How can I calculate the relationship between propeller pitch and thrust?
9
If an elliptically-shaped aerofoil gives the optimum lift distribution, why aren't propeller blades designed around this ideal?