Is the Suntoucher CG too far aft?

I acknowledge my very limited understanding of flight mechanics, but at first sight something tells me that the CG of the Suntoucher solar aircraft concept lies too far before the main wing and the forewing is too small to attain satisfactory stability and maneuverability.

This geometry is not OK at all.

Question: Did I miss anything? 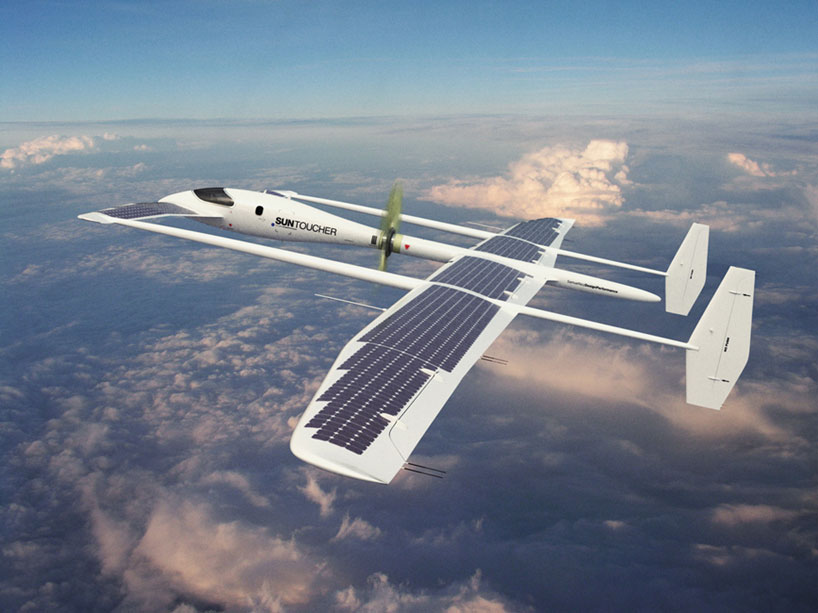 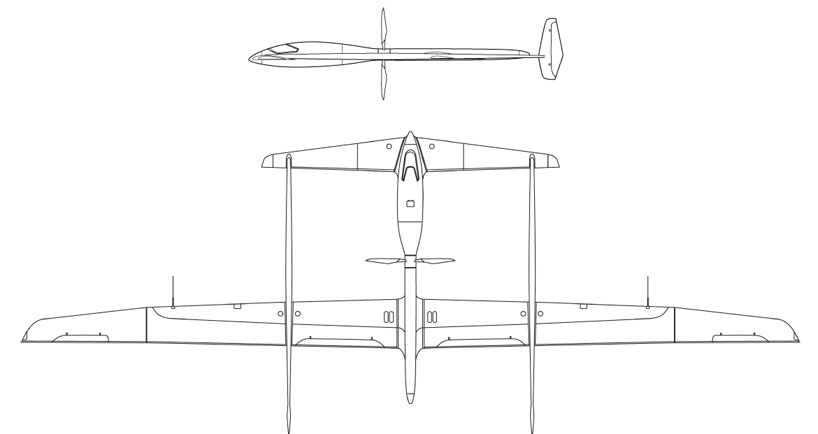 Good catch! You are right, the center of gravity will be too much forward for a canard. If they put the prop on the sting behind the wing and the cockpit a bit ahead of the wing, things would look more credible.

The size of the foreplane is not obviously wrong, but the booms at the tips of the foreplane look strange. They serve no obvious purpose, like the sting, and the tailbooms look too thin for transmitting the loads from the vertical surfaces into the wing.

One third thing that looks odd are the control surfaces: The ailerons look too small to allow maneuvering in gusty weather at low speed. I guess the flaps on the inboard wing are for pitch control. Why are they not on the canard, where they would be more effective? Maybe because the center of gravity is so close to the foreplane, the designer decided to put them on the wing.

I agree with your assessment: This thing will remain an artist concept.

For comparison, see below a picture of a solar aircraft that actually flies and got most things right: The Icaré II: 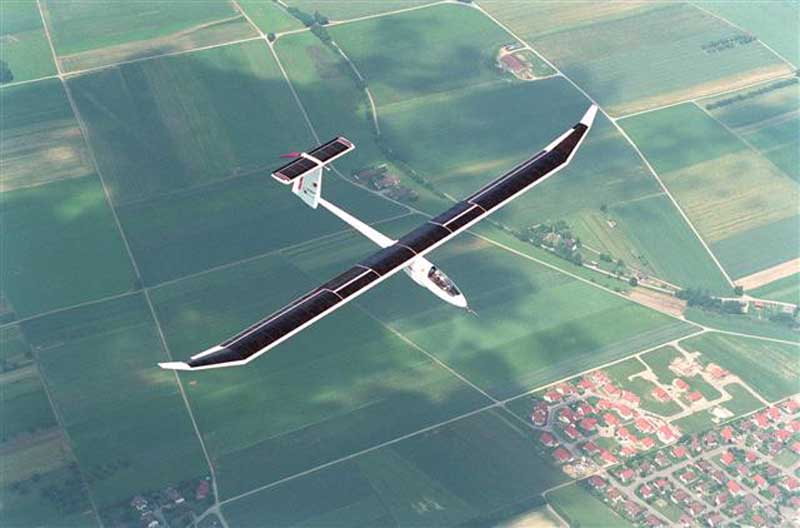 I think you are talking about the canards. Canard aircraft are much more common than you think and are certainly stable. For example, see this Rutan VariEze: 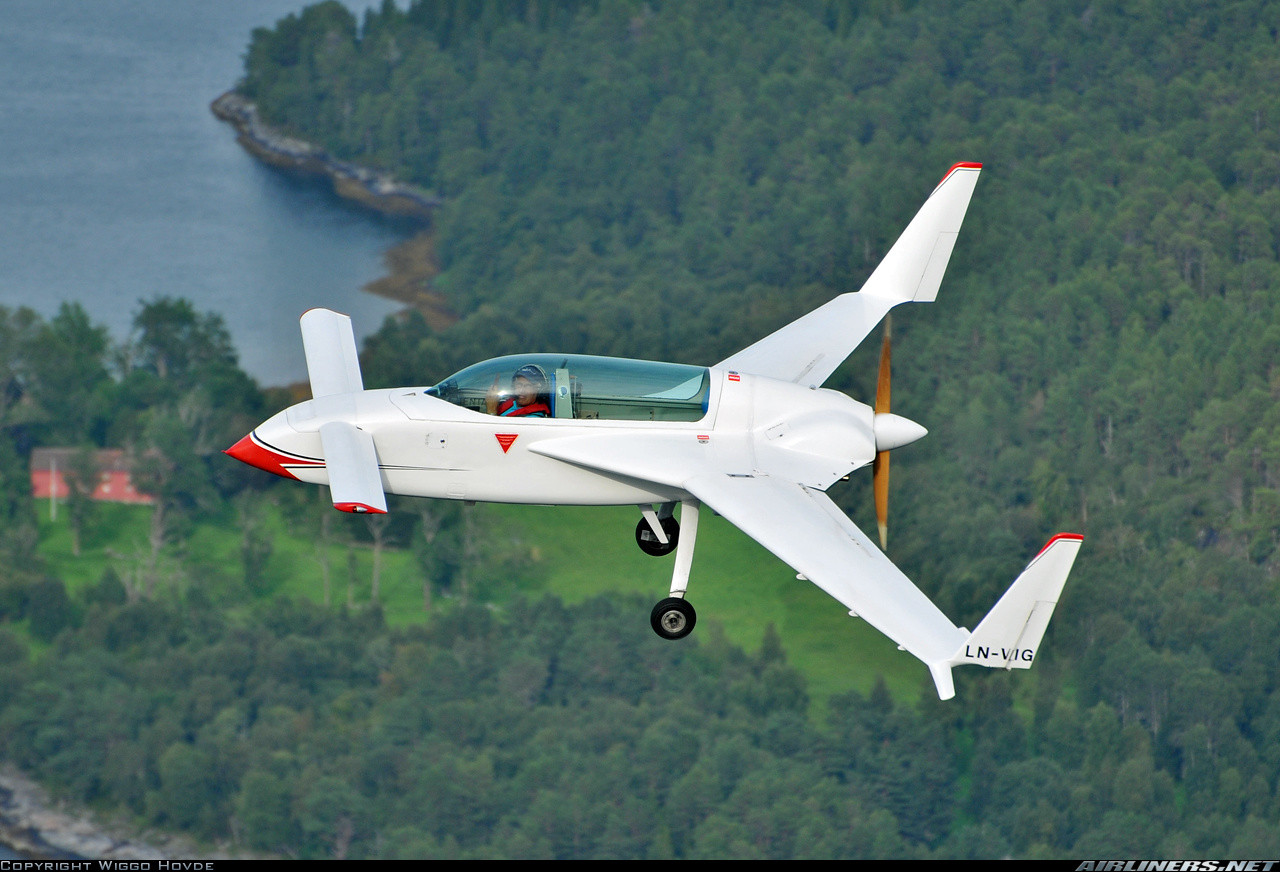 In case of the canard aircraft, the center of gravity is forward of the main wing. 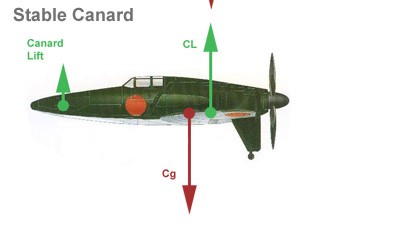 The aircraft may still (most probably) remain a dream for various reasons, though I doubt having a canard has anything to do with it (Actually, the span is on the larger side). Without details, its just speculation.

Interestingly, the aircraft looks similar to the Rutan Voyager, which holds the world endurance record and had problems with pitch stability.

The Suntoucher solar aircraft design looks fine to me. A key note: this is a solar electric powered aircraft using an AC electric motor to turn the prop. Therefore the stinger section of the fuselage would contain batteries, adding much weight in the area of the wing, putting the CG near the prop on the wing side. Also with the prop mounted, and spinning on (around) the stinger part of the fuselage applying a pusher force on the crew pod, you need to strengthen the connection from the wing to the crew pod; thus the outriggers from the canards to the wing will carry the force and stabilize the wing

Not the answer you're looking for? Browse other questions tagged aircraft-design stability canard maneuverability or ask your own question.

23
Would an aircraft with contra-rotating propellers longer than the plane's wingspan be able to fly?
5
How to balance the cargo on a plane with the wings further aft?
11
About climb: If we use T/W as input, the second grade equation yields two solutions for W/S. Are both solutions realistic?
3
How to maximize your practical lift/weight ratio in a multirotor?
3
What is the effect of aft centre of pressure movement on static longitudonal stability?
2
Does it make sense to use a canard in combination with a conventional aft elevator control surface?
4
What are the relations between stability, controllability and maneuverability?
7
Why was the Akron’s spy basket installation so remarkably unstable?
5
How can an up-lifting tail have normal force direction and gradient when generating UP force?