Why do Airbus sidesticks add their inputs?

There have been a couple of Airbus disasters where, in the confusion leading up to the crash, both pilots have attempted to control the aircraft with their sidesticks at the same time. In the absence of either pilot using the priority button, the effect of this is that both inputs are added, and the result clamped to the maximum single input.

On the face of it, this is a very curious design decision. Obvious alternatives include prioritising the left-seat stick (unless the priority button is used), or even averaging (instead of summing) the inputs.

Are the original reasons for this design decision documented? Is there an advantage to summing the inputs?

I believe that there is some logic in the design, actually, even if I don't really fancy it. If you think of the traditional yoke as a control element where a certain force (or moment, rather...) results in a certain change of flight path, then if both pilots apply the same force (rather than targeting the same deflection), the resulting aircraft reaction is more pronounced than if only one pilot applies that force, although probably not with linear relation. The sidestick controlled flight control system does the same.

What is missing much more, to my mind, is feedback to one pilot about what the other one is doing with the stick. I believe that having them interconnected or back driven would probably not have been such a bad idea.

Why do Airbus sidesticks add their inputs? I do not work for Airbus and am not privy to their design documents, but here is what I reckon based on the over 50 real-time simulation models of aircraft flying controls I've written and tuned:

As long as proper procedure is followed and only one pilot at a time handles a stick, summing the outputs works best. However the situation breaks down when proper procedure is not followed: in times of emergency and urgency, in the absence of clear heads. Two pilots each continue to provide very different stick outputs - which one should the aircraft use? How can it make a decision of which of the two inputs is the valid one, if the humans have not instructed it? There is no fool proof solution to this, so picking the best solution when procedure is followed (summing the outputs) makes sense and provides flexibility and continuity.

There have been a couple of Airbus disasters where, in the confusion leading up to the crash, both pilots have attempted to control the aircraft with their sidesticks at the same time. 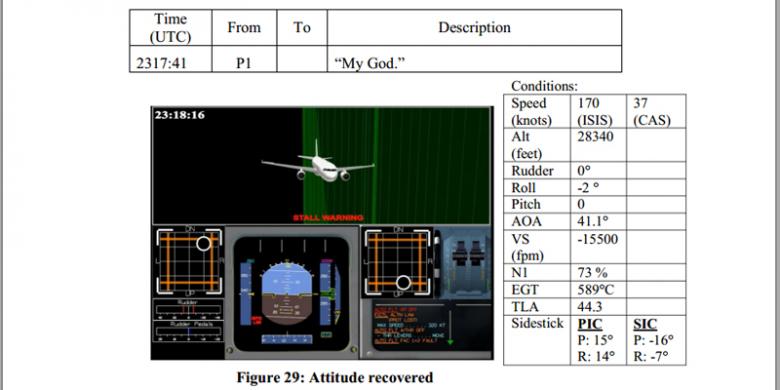 Consider the case of QZ8501. The captain is an ex military pilot, recognises the stall and provides proper recovery input to the stick. Had he instructed the FO to not touch the stick, he might have recovered successfully. But his ambiguous use of English (not his first language) caused the FO to follow perceived instructions and give a pull up input, of which the captain was unaware.

Summing the stick outputs did not save them, nor would have averaging the outputs. Transferring authority to the captain would have in this case, but now we would be waiting for Murphy's law: the captain panics while the FO gives proper inputs. I've heard anecdotal evidence of a case just like that, in gusty conditions at landing with an FO highly experienced in bad weather while the captain was from a warm and sunny country.

The basis of your question is a situation where proper procedure is not followed due to an emergency, and in this situation none of the options work very well. The only real solution here is to couple the sticks, and provide one output as a result of conflicting force inputs, like in physics. If there is no time for the rational brain to act, the only solution is to make use of the rapidly reacting sensory organs built into all humans.

This will be a theoretical answer, but unless the site is visited by someone from the Airbus control design team, that is probably the best we are going to get. Let me list for you the extremely desirable characteristics of the 'sum' approach.

Not the answer you're looking for? Browse other questions tagged airbus sidestick or ask your own question.

4
Why does Airbus suppress stall warnings in certain situations?
5
Who has the final authority over sidesticks?

15
Did Airbus add an audible alert when the autopilot partially disengage after the crash of Aeroflot Flight 593?
13
Why is the Priority Takeover button used?
8
What distinguishes the Airbus-Sidestick from an ordinary gaming joystick?
5
Who has the final authority over sidesticks?
2
What are the mechanical deflection angles for Airbus side-stick controllers?
5
Why Airbus A220 if A320 already exists?
8
What has Airbus done to address the dual input issue?
12
Could sidesticks be linked?
9
Do pilots use the pedals in flight on planes with a sidestick (Airbus)?