How do gyroscopic instruments work? [closed]

I'm trying to better my understanding of the physics behind gyroscopic instruments in an aircraft. I am aware that a spinning gyroscope creates rigidity in space by resisting applied forces. But, what exactly is the resistive force acting on the externally applied to forces, and how is it created? Is that what precession is?

I saw this pretty cool video a while ago:

It gives an intuitive discussion of gyroscopes.

On another level though, it boils down to the angular momentum of the spinning gyroscope, and the fact that in order to change that momentum's direction/magnitude, an external moment must be applied.

Gyroscopes basically work by the principle of conservation of angular momentum. Consider a gyroscope (or a spinning wheel) in space like shown below: 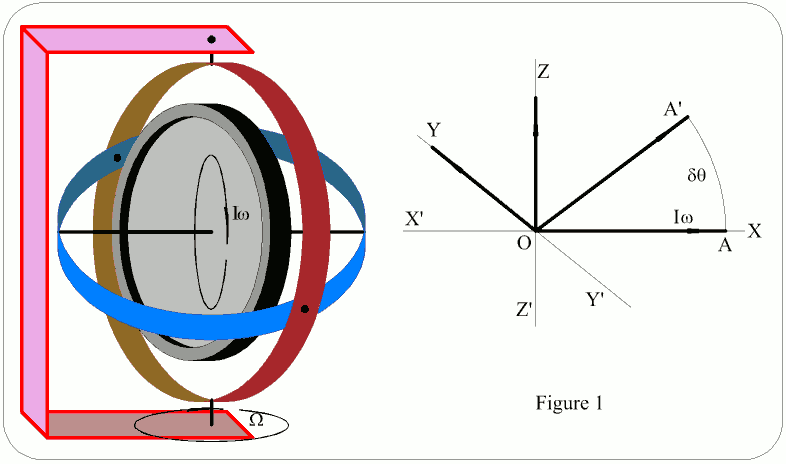 Consider the wheel in the center spinning at an angular velocity $\omega$, so that the spin angular momentum is $I\omega$, along the X axis. Now, consider a torque applied $\mathcal{T}$ along the Z axis.

Now, the resultant of these two makes the spin axis to align along the axis A'. Basically, the spin angular momentum 'chases' the torque in the same plane. This is the basis of gyroscopic precession.

Not the answer you're looking for? Browse other questions tagged aircraft-physics gyroscopic-instruments or ask your own question.

4
What and when was the first gyroscopic flight instrument introduced?
8
How does a horizontal situation indicator (HSI) work?
6
How do modern avionics work without vacuum pumps or gyroscopes?
5
Do air-driven gyroscopic instruments suffer from icing or any blockage of filter?
4
What instruments are used to indicate aircraft attitude in acrobatic airplanes?
0
How does turning Errors in the Air Driven Artificial Horizon work?
1
How does vertical stabilisation work?
2
How do slats actually work?
0
How do AHRS systems meet the "gyroscopic" requirement of 14 cfr 91.205.d?
0
How does bypass air work?