Where did the US 'N' registration letter come from?

Why is the first letter in US registration numbers 'N'? Other countries seem to use a letter significant to their country, for instance 'G' for Great Britain, 'F' for France, 'D' for Germany (presumably for Deutschland), and 'JA' for Japan.

Does 'N' have any significance at all?

The origins of this can be traced back to CINA (the Commission Internationale de Navigation Aerienne / the Convention for the Regulation of Air Navigation) established as part of the Paris Peace Conference immediately after WWI.

A part of this conference was the adoption of a system of international aircraft identification still in use today. The U.S. delegation was allocated "N".

A number of theories exist as to why "N" was chosen specifically, and there's a great article about it over at the American Aviation Historical Society.

Theories range from, the largest number of states begin with the letter N; to the recognition of the development of wireless communications by the U.S. Navy that had been using "N" as the prefix to its station call-sign identifiers since 1909.

I'm building this post expanding on Danny Beckett's information, give him credit :-)

Since 1919, aircraft registration is based on international prefixes allocated by ITU to radiotelegraphic stations rather than on a specific system. N prefix was allocated to US by ITU in 1919, along with KDA-KZZ and W. The choice for this system for aviation matters is materialized in the Chicago Convention since 1944, and previously in the Paris Convention it extended.

The question boils down to: Why did ITU allocate N and W (plus KDA-KZZ) to the US? instead of U, US or USA? The answer is likely US was not so involved in these matters at the beginning and choices were limited when the interest came:

I guess founding members of ITU helped themselves with prefixes, and when the others came they had indeed fewer choices. Whole blocks (single letter prefix) have been allocated to actual or expecting-to-be empires: Germany (A, D), GB (B, G, M, and V for the overseas colonies), France (F), Italia (I), Japan (J), US (N, W), Russia (R).

In the end what was named the "call letters" had to be renamed the "call signs" with the addition of figures, like "2" for Guernsey or "9K" for Kuwait.

At the beginning of the 20th century, radiotelegraphy ("wireless") was a new technology and communications with ships were handled using several variants of Morse code, Q-Code and protocols, by commercial operators like Marconi, according to their own practices. Even uniqueness of radio station identifiers among all involved stations was not guaranteed.

Such a technology used worldwide required some international agreements on important matters like frequencies, techniques, codes, station identifiers, etc. These agreements were obtained through formal radiotelegraphic conventions, in particular:

These conventions established standards to be implemented by involved stations, of which a standard use of station identifiers (the "call letters").

Agreement on country prefixes for callsigns

Station identifiers had still to be delivered by different States, an agreement had to be found to ensure they would be unique. In April 1913 the International Bureau of the Telegraph Union released a list of national prefixes for station identifier allocation by States. This list was made official in the US by the Department of Commerce, in a document titled "Radio Call Letters", in May 1913: 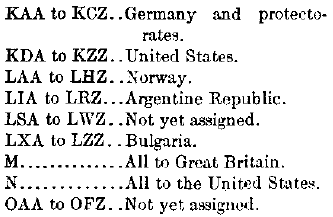 The Commission Internationale de Navigation Aérienne (CINA) has been the precursor of ICAO. Its role was to help build international air navigation services.

To handle aircraft, ATC needed to identify them, and aircraft had to be registered at the State level, so that they could be linked to some legal system. CINA proposed to use a process similar to the one for radio stations, and to reuse the same ITU prefixes, with some minor adjustments (like adding a hyphen after the prefix) but also some changes, e.g. Germany was removed from the countries with a prefix: 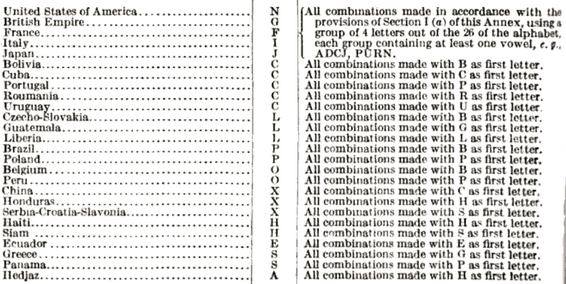 This proposition was adopted at Paris Convention in 1919. Paris Convention would later be extended by Chicago convention, and CINA replaced by ICAO, an organization of the UN. The prefixes would be updated in 1929 to the ones used today.

International Telecommunication Union (ITU) still maintains the list of prefix blocks in Appendix 42 of the Radio Regulations, and ITU is a full member of ICAO (without vote right).

Not the answer you're looking for? Browse other questions tagged usa aircraft-registration or ask your own question.

5
What is the historical reasons to start Belgians registrations with “OO-”?

5
Where to find information about number of seats knowing the aircraft Registration ID?
7
How to get registration from ICAO 24 bit code?
23
Where did the “K” identifier prefix for US airports come from?
13
Do commercial airliners have the tail number placed somewhere on a placard in the cockpit?
19
Is ATC communication subject to FCC profanity regulations?
7
Why are almost half of the world's helicopters in North America?
6
What is the average number of flight hours that US private pilots require before passing their checkride?
5
How come some aircraft have really cool registration numbers?
5
What is the historical reasons to start Belgians registrations with “OO-”?
4
Were planned release dates skipped in 2020 for the VFR sectional charts for Juneau Alaska and Dutch Harbor Alaska?