How many bird strikes are there per year? Any world-wide statistics?

Does anyone know where I could find where the highest rates of bird strikes are?

Along the same lines, other wildlife, such as moose or bears on runways?

According to currently available data, it is estimated that a bird-strike event occurs once every 2000 flights (Khan, Kapania & Johnson, 2010). Further analyses of bird-strike statistics have shown that only 20% of bird strikes are actually reported by aviation staff. This means that the extent of economic and human losses resulting from bird strike could be much higher than what is currently presumed (Chuan, 2006). Consequently, this suggests that conducting further indepth studies on how to better capture reliable bird-strike event statistics and formulating strategies and solutions would be beneficial.

It had been intended to use the International Civil Aviation Organization (ICAO) database of bird strike statistics as a prime source of bird strike information, giving details of worldwide bird strike incidents and accidents. However, despite the best endeavours of fera, Atkins and EASA, it was not possible to gain access to this source of information. Therefore the literature search does not include data from regions such as Asia and Australia. Reporting levels from these regions are low and it is likely that even with access to ICAO data, there would be limited useful information available beyond that already available from UK and USA/Canada sources. It is estimated, based on previous fera Bird Management Unit experience, that the UK and USA/Canadian data obtained represents approximately 50% of all worldwide bird strike reports. Also regions such as Russia, China and South America do not routinely contribute data to the ICAO database.

Wildlife Strikes in the United States of America

Bird Strikes in the Czech Republic

In the period 1993–1999, the data relating to 165 collisions was entered into the Czech Air Force’s database.

Within the years 1996–2011, 271 bird collisions in 32 airports were registered by Iran’s Civil Aviation Organization (CAO).

Bird Strikes in the United Kingdom

This graphic shows trends on birdstrikes to civil aircraft 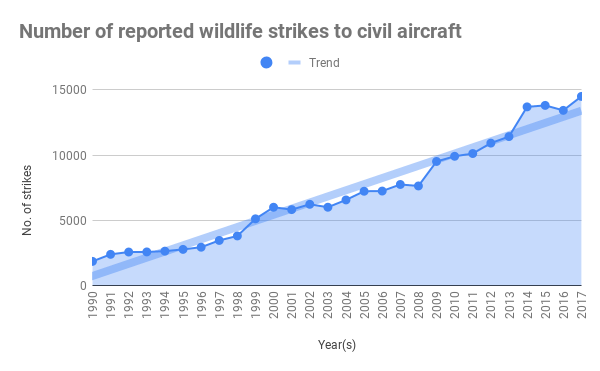 16
What precautions are taken to avoid bird strikes?

30
Is it safe to roll an airplane that isn't approved for it?
18
What are the ways to keep the birds away from airfields?
7
How many commercial passenger aircraft suffer tail strikes in a given year?
32
How serious is an impact like the 10/2017 Delta Airlines suspected bird strike?
3
How many landings per year are performed using the integrated standby instrument system?
15
Could a golf ball damage an airliner?
31
Why was a flight delayed because of a bird in the cockpit?
5
Is there (some form of) penetration testing in aviation?
9
Can "a drone" damage the wing of "an aeroplane" to the extent it actually threatens its ability to fly?