Could a commercial plane seat configuration look like a troop carrier?

I wonder whether Michael O'Leary has already seen that. I am pretty sure he would be eager to implement the idea. However, is that feasible - both from a legal, and as a security policy - for commercial planes transporting civilians? Maybe military personnel can be trusted to evacuate the plane faster than average civilians in case of emergency. 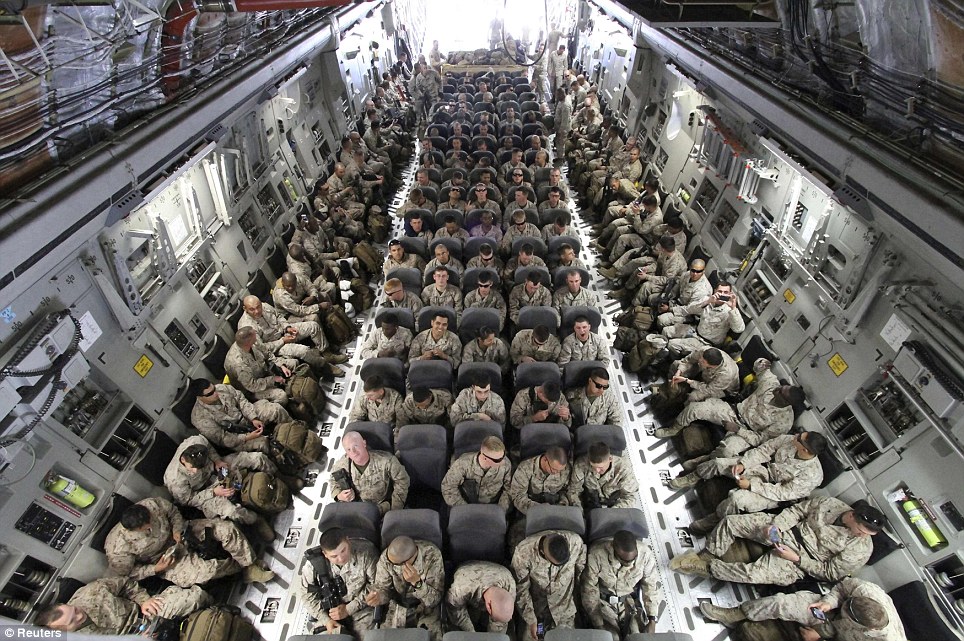 I believe the apparent lack of space or the discomfort is a red-herring. That's simply not the case.

The passengers don't seem to be tighter packed than in a Ryanair flight actually. And I also don't believe that the sidewards configuration is motivated by this rationale.

The aircraft is a Boeing C-17. It does not have a civilian version, so direct comparison of seat arrangements is not possible. Its inner space, however, is actually 18 feet (5.49 m) wide for 7 passengers and two ailes. So, it appears that the latter is less generous with its 737-800 < 12 feet wide with a single aisle, for 6 passengers (each getting 17.2).

The Boeing C-17 is a multi-purpose military aircraft, designed to be adapted to different tasks (hence the sidewards seat).

It is meant for being used for medical evacuation:

Or, for transporting a howitzer: 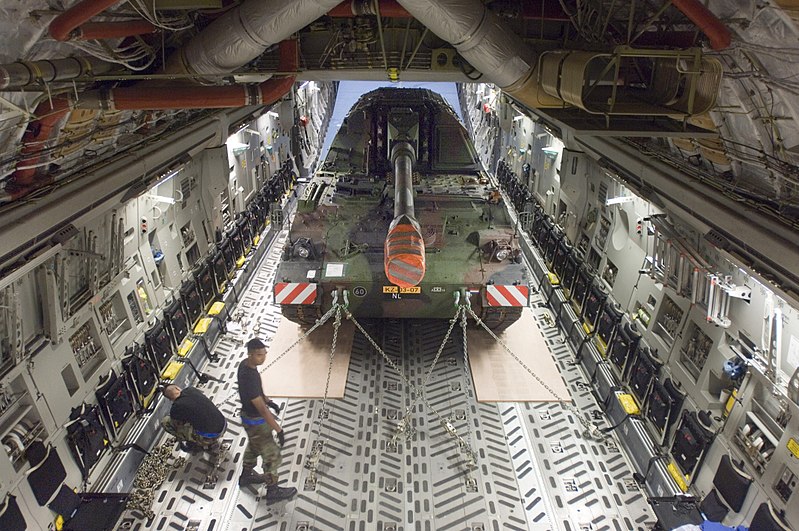 Or, for transporting paratroopers:

Legally, you would need to find a seat that passed the FAA's 16 G "side facing" requirements. The AC that covers the 16G rule has some text that may be of interest on this matter. The FAA admits that its an ongoing area of research and that currently special tests need to be undertaken to certify one. (bolded for emphasis)

(1) General. All seats occupiable for takeoff and landing are subject to the specified dynamic test conditions. Included are side-facing seats and both single occupancy and multiple place seats, such as divans. Compliance with the structural requirements should be demonstrated for side-facing seats, using the same conditions for the test and pass/fail criteria as for fore- and aft-facing seats. The seat should be loaded in the most critical case structurally. Means of restraining the ATDs may need to be adapted to ensure adequate retention during the test. The application of floor distortion will need to be assessed on an individual basis, depending on the design of the fixation of the seat. The injury criteria of § 25.562 are not adequate to demonstrate equivalent safety of side-facing seats when compared to fore- and aft-facing seats. To demonstrate equivalent safety fully in the absence of such specified criteria, the applicant must use other injury criteria which may be derived from the automotive industry, which uses side-impact ATDs.

(2) Assessment criteria. Research into side-facing seats is ongoing. As research proceeds, the FAA will work toward establishing a more definitive policy with respect to the acceptance of side-facing seats. Until then, in the absence of specific compliance guidance, the FAA is prepared to assess side-facing seats on the following basis:

(a) The seat must demonstrate compliance with the structural requirement.

(b) If an acceptable side impact ATD has not been used with assessment of the corresponding injury criteria, it must be shown that the occupants are restrained in a manner that prevents substantial energy absorption by body to body contact (on a multiple occupancy seat) and which, using the best available engineering judgment, minimizes injury to the occupant(s).

The way this reads in short (at least to me) is that the FAA does not really test side facing seats all that often but they are willing to if an appropriate means of testing is devised, you can prove that people smashing into each other wont cause any serious problems and that your seats will be ok when a shock wave passes through the floor (same as the forward/aft facing seats).

On the evacuation note the FAA does not really care what the seat orientation is in terms of evacuation. If you are talking about converting a modern airframe you likely could not place a seat in front of the over wing exits but other than that so long as you comply with the evacuation time limits you will be good to go (from a strictly certification stand point). Since this configuration still has rows similar to that of a normal airliner I dont see why you would not be able to properly demonstrate evacuation capacity in this configuration.

The biggest issue I see here is a lot of toes getting run over, and knees bashed by a galley carts...

Goals are not the same, inducing requirements and means differ. Not to say that soldiers can be packed as cargo, but military transports are supposed to mobilize huge amount of troops with their equipements on the battle field in no time, and soldiers know that and are prepared for critical scenarios.

If troops were to ask for same treatment as civilian passengers, it would raise the following issues :

It seems on a military point of view, having civilian-like things doesn't bring advantages, only issues. So that's how it is.

If troop transport concepts were to be used on civilian side (airliners), I don't think you and me would agree (assuming we're not soldiers)

By the way, mass evacuations are a huge step beyound your posted picture. ;)

I inverted scenarios by suggesting why military personnel wouldn't have the same treatment as civilian travelers on purpose : you're comparing two very different situations that doesn't have the same priorities, goals and safety concerns. That means what matters, what is more efficient, what costs less in a case are not the same for the other. The target audience is different. One is going to fight at war, the other is on vacation/family/friends visit, business travel or starting a new life. That means it's not only about safety concerns.

Not the answer you're looking for? Browse other questions tagged seats low-cost-carrier seating-capacity or ask your own question.