Do any aircraft out there use negative lift?

A lot of aircraft generate negative lift- not in the wings, but in the tail plane. This is used for stability. Consider a trimmed aircraft as shown below:

To trim the aircraft (i.e. no rotation about c.g), it is necessary to balance the torques produced by the wing and the tail. But since both rotations are counter-clockwise, it is impossible to balance the two rotations to produce no rotation. However, if the tail lift is negative it then produces a clockwise rotation about the cg which can balance the wing rotation. For this reason, the tailplane is designed to produce a negative lift. 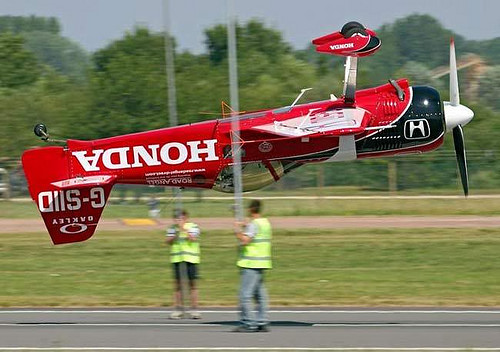 Yes. Most airplanes have the centre of mass forward of the centre of lift of the main wing(s). This would make the airplane "tip over" forwards, so the tailplane is an upside-down wing, and provides negative lift sufficient to balance the airplane. This is a conventional arrangement. On some, the "car spoiler" shape of the tailplane, with the flat side on top and the cambered side underneath, is very obvious.

I hope that answered your question. If you are patient enough, try reading this chapter from the Pilot's Handbook of Aeronautical Knowledge. It is the same book I used for my pilot's license.

Not the answer you're looking for? Browse other questions tagged aircraft-design aerodynamics lift or ask your own question.

30
Can a large passenger aircraft recover from a stall?
17
Do any airplane designs exist that don't involve a flight surface that provides downforce?

5
How is the lift generated by a number of out-of-plane staggered wings calculated?
8
Is there anything wrong with this more symmetric aircraft design, and why isn't it used?
10
How would an airfoil react if it was flown backwards?
0
Pressure Distribution Pattern around Wing
2
Do horizontal stabilisers provide any lift?
1
Why is a reduction in lift called 'drag'?
1
Will this specially shaped can produce any lift?
1
Is there an ideal lift distribution for human-powered aircraft?
3
Once pressure distribution is established, why soft wing at zero AoA without battens can't maintain shape?