What are the “channels” on the A320 Rudder Travel Limit Unit?

The KNKT's final report on last year's Air Indonesia QZ-8501 crash repeatedly mentions that the faulty solder joint on the Flight Augmentation Computer (FAC) caused an open circuit on "both channel A and B", leading to the repeated failure of the Rudder Travel Limiter Unit (RTLU). (Page 66 of the report has a photo of the offending solder joint and of the whole module.)

What are these "channels"? The only relevant mention I can find in the report is on p37, an extract from the Flight Crew Operation Manual, as follows (ellipsis mine):

In performing these functions the FAC uses independent channels:

...
If a failure is detected on any channel of FAC1, FAC2 takes over the corresponding channel.

Are the "channels A and B" two of the output "channels" mentioned here? The last quoted line suggests that each channel is redundant between the two computers, in which case why would both RTLUs fail together?

The problem is that you're using the Flight Operations Manual, and not the Schematic Manuals. Quite frankly, FOM's pretty much suck in terms of technical details, but that's not their purpose either.

In regards to your question about what the channels are:

Channels are really just a euphemism for system redundancy. The FAC's are two completely separate entities (with crosstalk capabilities) - kind of like flight crews. The PIC (pilot-in-command) has primary control of the aircraft, while the SIC (second-in-command) has the same independent authority. The PIC and SIC can talk to one another, and monitor what each is doing. If the PIC falls ill, becomes incapacitated, etc.. the SIC can take over the functions of the PIC.

The FAC's work the same way. They both receive the same information, and have full capability of performing the work of one another. Take note of this schematic, courtesy of Airbus (found on the web), and which I took the liberty of highlighting: 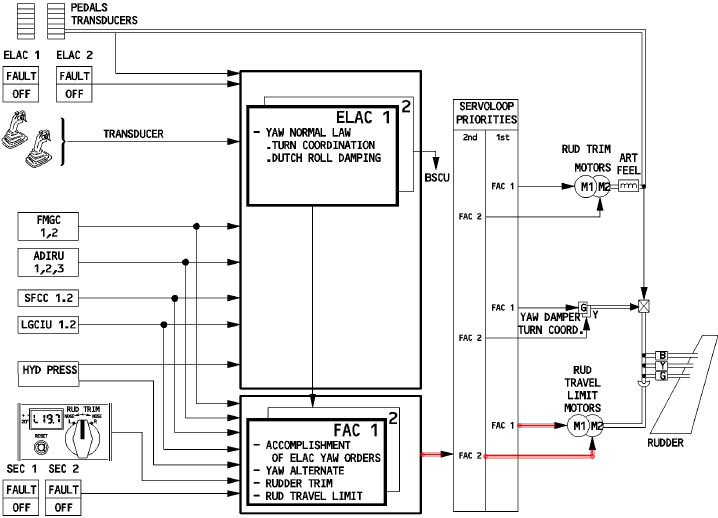 At the same time, both FAC's are receiving the same FMGC, ADIRU, SFCC, LGCIU data that the ELAC is. Again... Separate wires, separate outputs, and computed with two different processors inside the boxes. The FAC's are also receiving hydraulic pressure, commanded rudder trim position, and SEC fault data. Guess what? All on different channels.

Now, take note of the highlighted portion in red. Ordinarily, FAC 1 is in control of the servo loop for the RTL Motors. This essentially means that based on ALL of the inputs received from the ELAC's and other independent systems, the FAC 1 sends a signal to the rudder travel motor and says "Move here." The motor moves, and a feedback signal from the RTLU circuitry is sent to the FAC saying "Here I am." When the commanded position of the surface position minus the actual position of the surface is approximately ~0, the surface is nulled. This is a basic feedback loop/servoloop.

The FAC 2 has the exact same capabilities as FAC 1. The two are in constant communication, making sure that neither has failed. If FAC 1 reports a self-failure, or FAC 2 detects a problem with FAC 1 and/or its servo loop, FAC 2 can immediately take over.

All of the above is under the presumption of NORMAL LAW. It appears that cracked solder joints, emphases on the plural form, caused failures of Channel A & Channel B of the RTLU (see page 66 of accident report). Basically, like I mentioned previously, FAC 2 was monitoring FAC 1 for faults with it or its associated servo loop. When RTL channel A failed (the servo loop feeding data back to FAC 1; associated with Motor 1), the FAC 2 picked up on it, and took over on its own separate channel. A cracked solder joint on RTL channel B caused FAC 2 to trigger a failure. At some point during these failures, the flight crew pulled the circuit breakers, presumably to reset the faults. The loss of both FAC's put the aircraft into alternate law.

Once the aircraft was in alternate law, it seemed that there was a lot of confusion as to what was happening. From there, things went from bad to disastrous.

Not the answer you're looking for? Browse other questions tagged avionics airbus-a320 fly-by-wire or ask your own question.

6
How does SLATS/FLAPS retraction damage the RTLU mechanical stop if we retract them after the ADIRS are set off?

2
What would happen to the rudder on an A320 if both FAC systems failed?
4
What are the adverse effects of keeping the PACKs on the A320 running with the LP air conditioning unit connected?
29
What kind of delay does the A320's fly-by-wire system add?
5
What is the unit for the oil quantity display in the Airbus A320 ECAM?
1
What are the three sources that are relayed to the brakes and steering control unit of an A320?
6
What is the trim wheel behavior on the A320 family?
6
What does rudder input control in normal law in an A320?
4
On an A320, will the aircraft compensate for constant pilot rudder input?
5
Why do the A320’s primary flight controls have hydromechanical backups only for the rudder?