Constant TAS versus constant GS: What is the influence on turning circle?

Lets imagine a 50kts wind from east. Now lets imagine an aircraft flying at 200kts (True Air Speed) east that make a 1.15G turn -90º to north. Maintaining in all moments the given constant speed.

Considering my very weak understanding, the turning circle G depend on absolute speed (~ Ground speed), and thus, turning with a constant ground speed imply a circular turning. Which is independent of the wind. Of course, the pilot would have to accelerate/decelerate to maintain this speed. With TAS, the real speed is variable, so in our case, I expect to see a turning circle which is horizontally flatten.

But, using a planning system, the result I observe is the reverse: the circle is constant (independent of wind, circular) on TAS and variable (dependent on wind, shape is not drawn) in GS.

Edited: TAS=GS=200kts: I just realized that it is not really true, cause the aircraft need to head slightly east to compensate the wind, so probably the TAS will be ~206 and GS 200. Even if that do not make a big difference for the question. 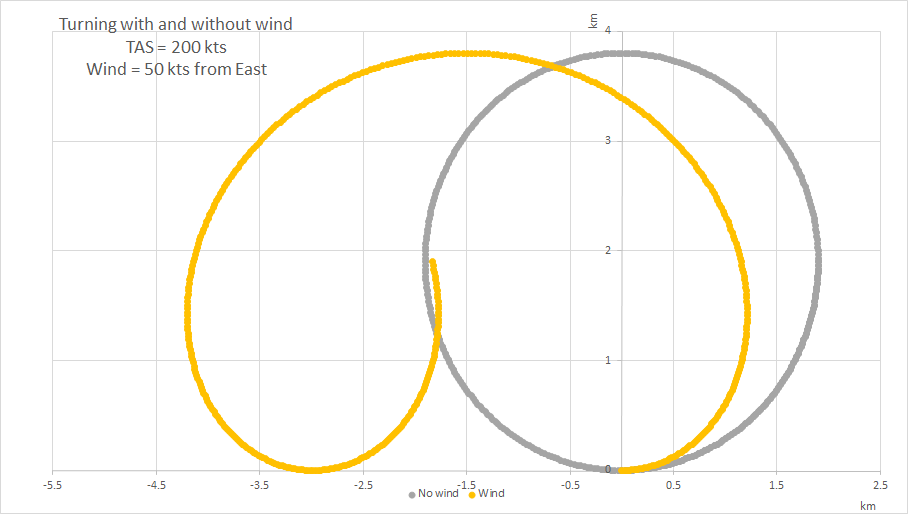 If you maintain a constant bank angle (30 degrees for a 1.15 g turn) and maintain constant true airspeed of 200 Knots, your path will be as shown in the chart by the yellow line.

If you maintain a constant ground speed (150 knots) and a constant acceleration 1.15, then your path will be as described by the grey line. It will be as if there is no wind, however it requires thrust variations and bank angle variations.

If you fly with 200 kts in a 50 kts headwind and want to fly a northerly track after finishing the turn, you simply stop turning after having decelerated the aircraft by only 150 kts. You don't fly a quarter circle of 90°, but only one of 75.5°; the angle where the cosine has shrunk to 0.25. After that, your easterly speed component is reduced by 150 kts and your northerly speed component has increased to 193.6 kts. When viewed by another plane flying in the same headwind, you have flown a segment of a circle measuring 75.5°. When seen by an observer on the ground, your ground track is a compressed circle segment.

Starting with 250 kts will make you perform the turn at a higher speed, but with the same technique.

Yes! Your assumption that your ground speed would be 200 kts is wrong. At all times, you will maintain a TAS of 200 kts, and the ground speed after the turn in the first case is only 193.6 kts.

In the second case, you start with a TAS of 250 kts and maintain that over the full turn. Your ground speed after having achieved a northern track is now 242 kts.

That depends on the observer. Your ground track is compressed in easterly direction because you started at an easterly speed component of 150 kts but used the aerodynamic forces of 200 kts for turning. You stopped turning after having yawed the airplane by only 75.5°, so you now fly a correction angle of 14.5° to achieve a purely northern track. The observer will see you accelerate from 150 kts ground speed to 193.6 kts ground speed (and from 200 kts to 242 kts in the second case).

The shape of the circle will only look round for an observer flying in the same headwind.

Below I added a graph with three ground tracks and airplane symbols overlaid to show the correction angle at the specific point of the turn. All three cases perform a 90° turn and fly initially parallel to the wind direction. I used 50m/s TAS and ±20m/s wind speed; the axes are in meters. The blue line is the case without wind. 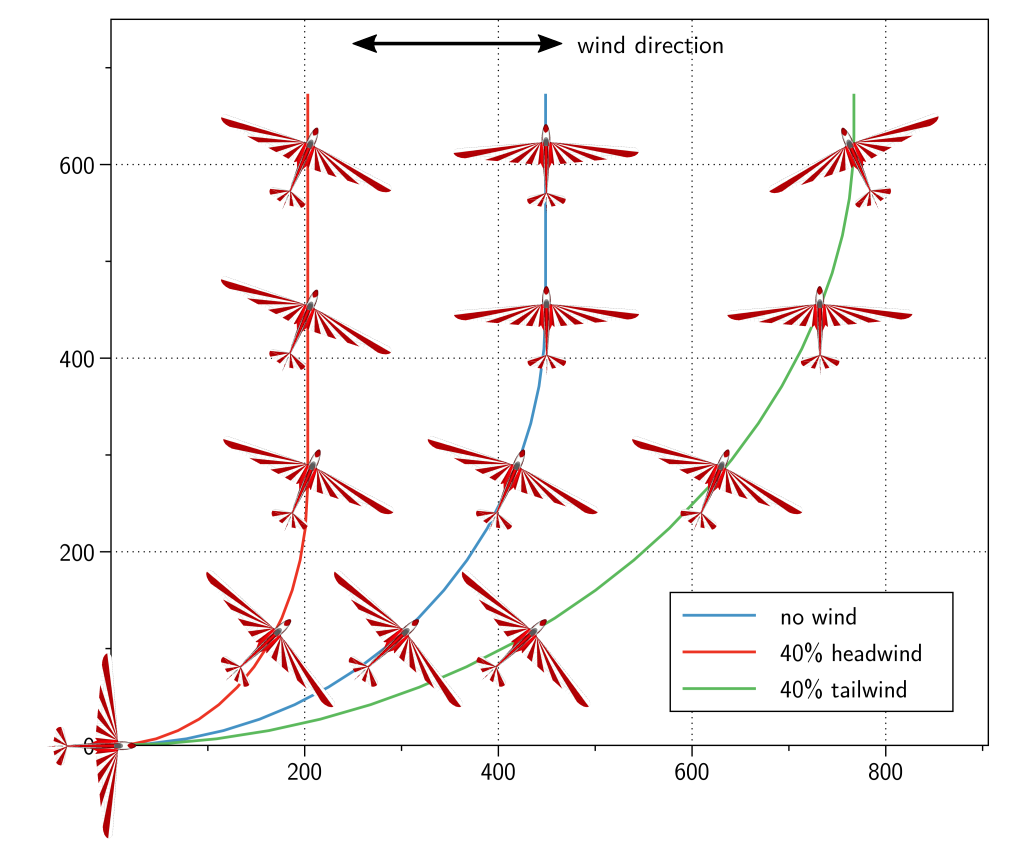 Ground track when turning in wind (own work). A turn from a headwind course takes much less time and azimuth change than one from a tailwind course. Only the ground track without wind is a circle, all other ground tracks are ellipses. In the headwind case the axis parallel to the wind direction is the shorter axis and in the tailwind case it is the longer of the two axes of the ellipse.

The radius of the turning circle depends on the True Air Speed, not the Ground Speed. TAS is the true measure of aircraft performance and is used in every situation when actual performance needs to be measured. 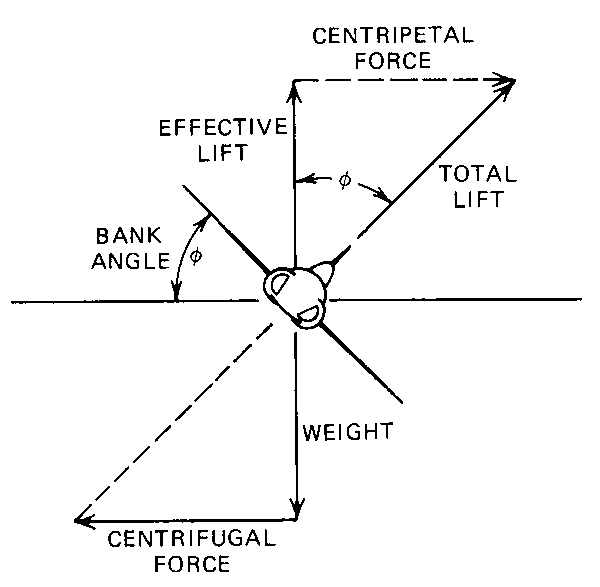 Now, the load factor n on the aircraft is simply the ratio of the lift to the weight.

The centripetal force acting on the aircraft can be given by,

which is equal to,

Note that in all these cases, the velocity $v$ is the TAS, not the ground speed. So, for a 1.15g (or n equals any other value) turn, greater the speed, bigger the turn radius, at a constant bank angle.

The case where headwind is equal to TAS is the limiting case- basically, the aircraft will appear to the ground observer to turn along a line.

It will be like some one on shore seeing a swimmer turning in a water body where the water currents vary.

Your second case requires the plane to reduce its TAS from 250kts to 200kts without changing the bank angle. That will affect the no-wind path to make a "decreasing radius turn". (@Aeroalias's answer shows the relationship between radius and velocity). For a given bank angle, a lower air speed will result in a smaller turn radius. Imagine a 1.15g turn in the SR-71 vs the same 1.15g turn in a Piper Cub. Since you're slowing down during the turn, your no-wind path will look more like the letter "J" than a quarter-circle.

Not ignoring the wind:

Up until now I've talked about the no-wind situation, because the airplane doesn't really know or care about the ground. It's just swimming through a large mass of air. "Wind" is what we call that air mass when is moving relative to the ground.

For the first case, the wind will "squish" the ground track of the latter 1/2 of your turn to make it somewhat "J" shaped.

For the 2nd case, the wind will "squish" the ground track of the latter 1/2 of your J-shaped turn to make it appear to be sharper (less circular).

Not the answer you're looking for? Browse other questions tagged aircraft-performance weather flight-planning or ask your own question.

2
With wind, what will a perfectly circular flight path relative to the surrounding air look like from the ground?
7
For light, GA aircraft, is there a "standard" turn, and what does that mean?
1
What is P-Factor in Propeller Aerodynamics?

21
What is the minimum turning radius of an SR-71?
5
At a constant power setting, does TAS change with altitude?
0
What does "Constant wind condition during flight" mean?
17
Why is max endurance different for jet and props?
8
When the winds aloft are light and variable, what wind direction and speed should I use for flight planning?
4
What is the purpose of including sea level pressure and temperature in a METAR?
4
Does altitude influence the flight range of an engine driven aircraft?
8
What factors influence the maximum speed of an airship?
2
What's the relation between TAS and Mach in tropopause?
0
What is the difference between the WSUSnn IDs used in convective SIGMETs?