How do aircraft differentiate between missile locks?

I have explored many similar questions such as:

In reading there respective answers, I have learnt about the multitude of detection mechanisms employed, but one question lingers and remains unanswered:

In a dogfight scenario (although they can occur over a large distance) a single aircraft may well detect the signals emitted by either the missile as part of an "Active Radar Homing" mechanism, or from the launcher itself as part of "Passive Radar Homing", regardless of whether the aircraft is the intended target, presumably causing every aircraft in the area to be notified to the single missile lock.

I don't pretend to be well versed on the subject of aerial warfare, yet I consider it nonsensical that every aircraft in the engagement be notified to the missile lock of a single aircraft as it would distract the pilots, all of whom would be required to ensure that they are not the targets.

Non-holographic radar systems such as those used in fighter aircraft and active guided missiles only point in one direction at a time. Normally, when the radar is in search mode, a mechanism inside the radar makes the beam move from side to side (possibly up and down as well), so it has a wider field of view and can pinpoint the direction of any aircraft it finds.

The aircraft with the radar warning receiver (RWR) sees a brief pulse of radiation every second or so: only when the beam is pointing in its direction. This way, it knows the radar emitter is in search mode, and the direction of the emitter. Every aircraft in the radar's field of view will see the beam at different times, and they will all see the radar on their RWR screens. In a combat zone this is potentially a lot of emitters, but the RWR can analyse the radar signal to identify the radar: what type of aircraft, SAM, or ground radar it is, and whether it's friendly or enemy.

Getting the position of the target only every second isn't good enough to guide a missile towards it. When the radar is in track or launch mode, it stops scanning the beam, and keeps it pointed at the target aircraft.

The RWR on the target aircraft now sees much faster pulses of radiation, so it knows that it is the sole target of the radar. At this time, it can warn the pilot of a missile lock. But because the radar is now only pointing in this one direction, other aircraft in the area don't get illuminated by radar at all. Their RWR systems won't pick anything up. Only the aircraft that's actually threatened gets the missile lock warning.

In addition, the same analysis that can identify what type of radar is illuminating the aircraft can also identify fully active radar-guided missiles. Like when the aircraft's radar is in track or launch mode, the missile's radar emitter only points in one direction, and doesn't scan, so only the target aircraft will see it.

Obviously it's a little bit more complicated than this. There are a lot of details about how frequent the radar pulses are, and how the RWR knows the range of the source, but I hope I've captured all the important information in an understandable way.

In short, the onboard Radar Warning System computer analyzes the data and determines whether the missile has locked onto the aircraft.

In general, aerial warfare is very complex and it is very difficult to explain in the real situations. Basically, the radars use different modes while engaging aircraft (from other aircraft or ground based SAM batteries):

Radars can change either the frequency or the strength between these modes. For tracking a target, the radar is basically scanning a smaller portion with higher intensity to get more resolution. So, the radar signals will be stronger.

Now, consider the dogfight scenario you mentioned; every radar in the area will be emitting electromagnetic radiation and get the returns from all the radars in the area. This is, to put it mildly, confusing. So the radars adjust the frequencies so that they have different values and track the aircraft.

Now, the RWR uses these two information to differentiate between the various radars. By looking at the frequencies/strength and comparing it with the available onboard library, it can determine which radar is emitting in which mode. In fact, creating this library is (one of) the most difficult things in design of ECM systems, which is the reason why everyone is trying to 'probe' other's defences.

This image shows a typical RWR display, where the threats and their locations are shown. The stronger the radar signal is, (probably) the closer is the radar source and more imminent is the threat. 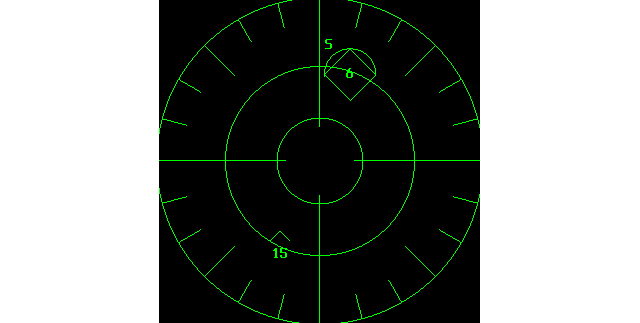 This display shows an F-15 at the 7-o'clock position and two surface-to-air missile (SAM) sites, an SA-5 "Gammon" and an SA-6 "Gainful", at the 12- to 1-o'clock position. The RWR computer has determined the SA-6 to be the highest priority threat in the area, enclosing it with a diamond.

There are other ways to determine of the missile is locked on the aircraft: you can use a doppler radar to track the missile and calculate the intended trajectory. However, this means exposing the aircraft to the radars in the first place.

Once the onboard computer analyzes the data and determines the the threat and severity, it alerts the pilot, usually by changing the display and in some cases, by audible alerts. In such cases, the pilot can release the countermeasures or the system can do so automatically.

However, the real situation will be much more complex with all the countermeasures, ECMs and ECCMs etc. But this should give a basic picture of the situation.

Not the answer you're looking for? Browse other questions tagged military aircraft-systems dogfighting missile-lock or ask your own question.

58
How is a missile lock detected?
8
How does a Missile Lock Work?

58
How is a missile lock detected?
31
Why don't combat aircraft have rear-facing weapons?
12
How do pilots maintain level flight after launching missile?
16
How can you stop your missile locking onto a friendly target?
12
Do fighter jets experience a reaction or recoil force upon firing a missile?
8
How does a Missile Lock Work?
4
What's this sound? - Dogfight between F14 & MiG23
1
How practical is laser designation against helicopters?