What is the feasibility of converting an F-22 to carrier use?

I read that the Navy originally considered to use the ATF(Advanced Tactical Fighter) Programme aircraft (Now known as the F-22) as carrier aircraft but declined to do so when it came out. How feasible is it now to convert an F-22 to carrier use? (I kind of want to know because it is a better plane than the F-35 but is not used on carriers even though it was originally planed for)

In general, land based aircraft do not lend themselves well to carrier conversion. On the other hand, conversion in opposite direction is (relatively) easy, as shown by F-4 and F-18.

Conversion of aircraft to carrier use require a number of modifications:

The weight penalty due to these reasons can be non negligible. For example, the naval Rafale M version weighs nearly 500 kg more than the Air Force Rafale C variant (which has ~10 ton empty weight). USN calculated that the NATF (Naval Advanced Tactical Fighter) will be around 1800 kg heavier than the Air force version (ATF was supposed to weigh ~15 ton).

Another thing is that the USAF and USN had different requirements, for example, the USAF wanting a single seater and USN wanting a double seater, requirement of different sensors (for fleet defence) etc. in the end, the aircraft proposed for the NATF looked nothing similar to the one that finally became the F-22 and the project was quietly buried. 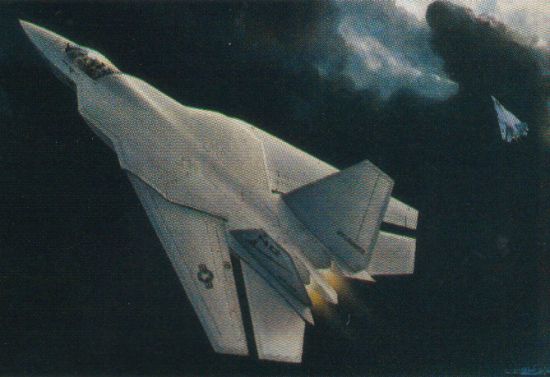 Note that the design has swing wings, as the aircraft was being proposed for replacing F-14 Tomcat. Another important result of the navalization of the aircraft is the reduction in the number of planform alignments, and their negative impact on the stealth characteristics.

Carrier conversion of F-22 could have been done if it was considered early in design. Doing it now (note that NATF was considered due to the insistence of Congress; it is doubtful if USN ever wanted it). Doing so later in the design process will result in another F-111B fiasco. As for doing it now, it is better to design a new aircraft (which was what the F-35 is).

Not the answer you're looking for? Browse other questions tagged military aircraft-carrier f-22 or ask your own question.

35
What is the procedure for landing on an aircraft carrier?
8
Can carrier-based aircraft takeoff while the carrier is stationary?
4
What modifications would be required to use a DHC-6-400 for Carrier Onboard Delivery work?
7
What is done to prevent the tail hook from bouncing off the carrier deck?
9
Do carrier-less militaries maintain carrier qualifications on allied boats?
10
Do carrier-less militaries retain the equipment for carrier operations?
7
Were WW2 American fighters designed to operate from dirt airstrips?
5
What happens during a carrier take off?
6
What is the three-light indicator on carrier-borne airplanes?
7
Can an F-16 land on an aircraft carrier, at all?