What is the purpose of the small fins on top of the wing surface of Boeing aircraft?

I've noticed on most Boeing aircraft that there are small fins on the upper surface of many of their wings. They are about one inch high and maybe two inches long (it's difficult to judge size from inside the passenger cabin without any reference) and spaced about a foot apart.

On the 737 there are eight of them spaced about a third of the way from the wing's root to its tip. On the 757 and 777 they are spaced out to almost the wing's tip, and I can't see them on any pictures of the 747's wing. 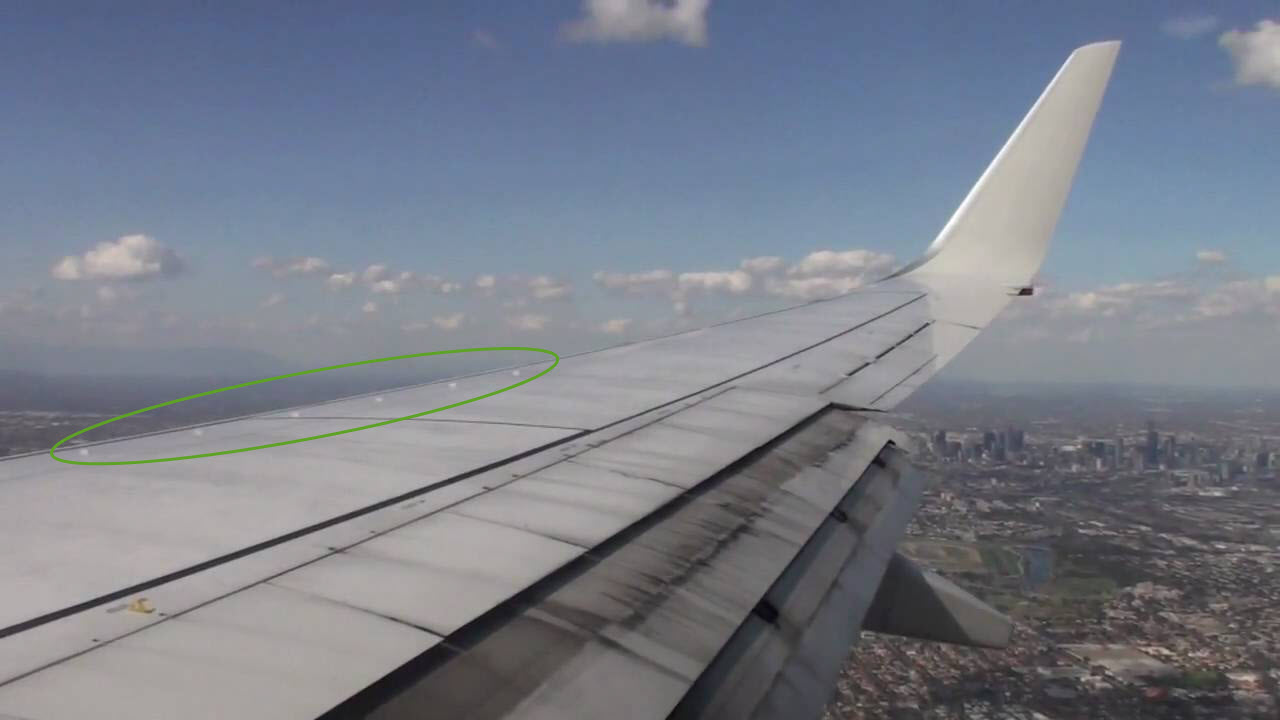 What purpose does these serve?

The only thing I can think of is that they somehow discourage span-wise airflow, but they seem too small and short to accomplish much. The stall fences I've found in pictures via Google are all much larger and extend around and under the leading edge.

OTOH, a diagram I found here suggests that they are placed at just about the place where the airflow turns span-wise. 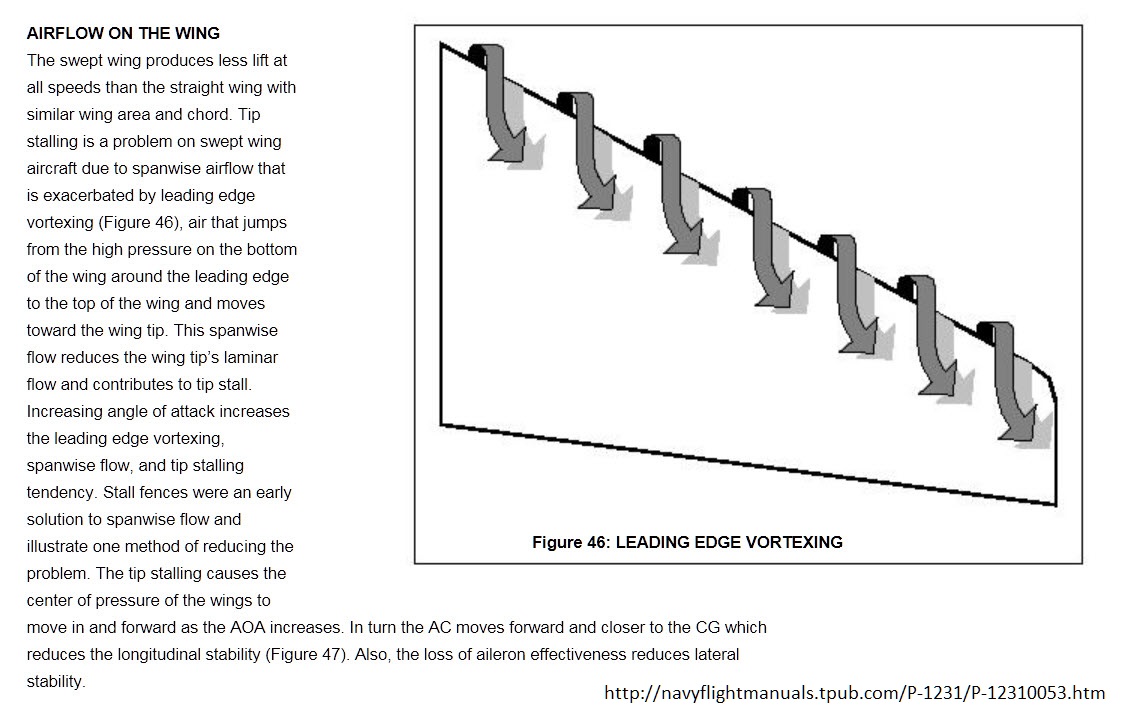 They must serve some purpose.

They are called vortex generators, and their function is to create a small vortex which re-energizes the boundary layer. Here is a better picture which also shows that their leading edge is swept like that of a delta wing: 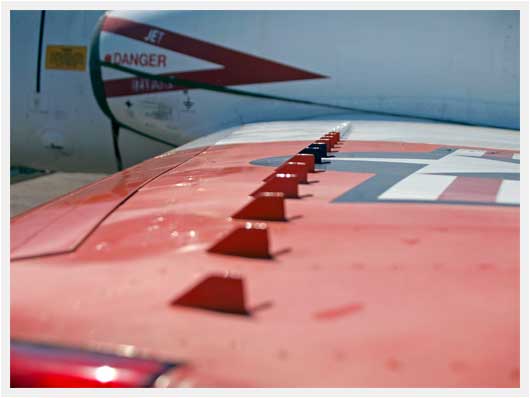 In essence, they are small wings which each create their own delta wing vortex. This vortex mixes fast-moving air from outside the boundary layer with the air close to the wing surface, which has been slowed down by friction. This helps

The diagram in your question about "Leading edge vortexing" is very misleading. Air does not flow like shown by those arrows.

An airfoil initially accelerates the air which flows over its top surface and decelerates it again over its rear part. On swept wings, this acceleration-deceleration only affects the orthogonal speed component, so the speed component in span direction remains unaffected. This is the reason for the higher Mach capability of swept wings, but also causes the air to flow first inwards and then outwards while transversing the wing's upper surface. The diagram shows no such inward flow, which is wrong.

In addition, friction decelerates the air flowing around a body, such that a layer of decelerated air surrounds each surface of an airplane. The thickness of this boundary layer increases with flow length, and on a swept wing this friction will initially mostly affect the orthogonal flow component. At around mid chord you will find air which has been decelerated mostly in its orthogonal speed component (since this component was so high over the forward part) and now will be subject to more deceleration of the orthogonal component, so that only the spanwise component will be left over the rear part of the boundary layer. Now this boundary layer will only flow off in span direction, such that a massive increase of slow, low-energy air will be collecting towards the tips.

A thick boundary layer will cause early flow separation, so when the angle of attack is increased, the flow at the tips of a backward swept wing will separate first. This will cause lift loss, and since the tips are also the rearward part of the wing, will shift the aerodynamic center forward. This in turn will make the aircraft pitch up, which aggravates the stall condition. If the separation happens asymmetrically, the aircraft will roll in addition to pitching up.

Both vortex generators and wing fences help to reduce this cross flow and delay flow separation on the outer wing at high angle of attack. Vortex generators also help to prevent boundary layer separation past a shock at transsonic speeds when placed close to the leading edge, something a wing fence is incapable of. Therefore, they are more helpful and have displaced wing fences on many swept wings.

During normal flight, the airflow is accelerated over the wing, producing lift. At this point, the airflow is attached to the upper surface. However, the airflow loses its adherence and separates from the wing, aircraft performance can suffer in the form of increased drag, loss of lift and higher fuel consumption. The vortex generators act by 'mixing' the air in boundary layer with free stream air (through the vortices), thereby preventing the flow separation.

A number of Boeing aircraft use them. The following figure shows the vortex generators (32 no.s) used in 777 and 777 PIP.

For swept wing aircraft, there is also a spanwise flow along the wing from the center toward the tips, in addition to the flow in direction of flight. This causes the boundary layer to thicken towards the tips, making them more susceptible to stalling than the wing root. As the ailerons are near the tips, this will make the ailerons lose control and create a pitch up moment (as it is usually aft of cg), which further exacerbates the problem, causing the whole wing to stall (due to increased angle of attack).

For preventing spanwise flow, wing fences are used, which are different from these. For example, the MiG-17 had prominent wing fences. 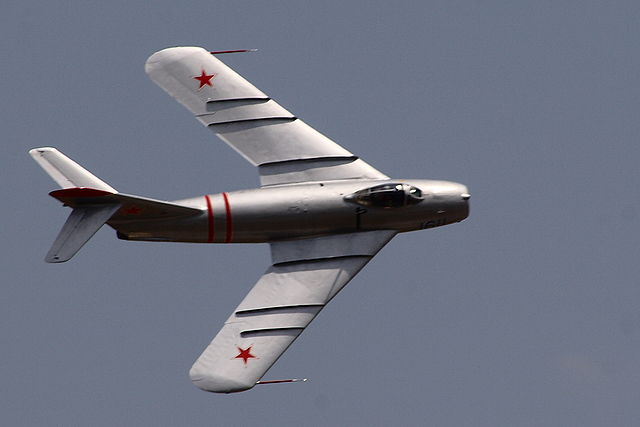 The function of both vortex generators and wing fences are the same (to prevent flow separation at high angles of attack); however, they go about it in different ways - vortex generators by creating vortices that prevent the boundary layer from separating, and wing fences by preventing cross flow by creating a boundary condition through the fences.

50
How complete is our understanding of lift?
47
Why does supersonic flight detach airflow from a wing?
31
What is vortex lift?
44
Is the visual artifact seen over the wing from different air densities, a reflection or something else?
5
Why aren't leading edge root extensions used on airliners?
0
Is a 20% forced transition in xfoil similar to adding a vg?

19
How does chord length affect wing design?
3
What are these parts on the wing of a Boeing 737?
28
Why do the wing tips on the Boeing 777X fold up instead of down?
11
Why do wall-to-wall airfoils in wind tunnels produce no (or infinitesimal) downwash?
2
Why can’t more older 737s be retrofitted with more newer winglets?
2
Why does the effective alpha/CL increase at wingtip of swept wing?
18
What kind of liquid can be seen 'leaking' from the upper surface of the wing of a Boeing 737-800?
0
Why aren't HLFC panels mounted on wing?