Why does a jet engine acquire a metallic whine when in full power? [duplicate]

I had a flight yesterday on an AA Embraer ERJ-190. As the plane idled at the end of the runway there was the familiar high-pitched jet whistle, which increased in pitch as the engine started spinning up. But, when it reached full power, the whistle was joined by a far-lower-pitched metallic whine, which persisted until the pilot throttled down after the initial steep climb.

I've heard this before on some (but not all?) planes. By ear, the whistle was about four an a half octaves above the whine, which is about a factor of 24 (I may have been off by an octave, or another factor of two).

On a past flight I calculated that if the main fan spun so that its outer edge was moving at the speed of sound, the whine would be at about the rotational frequency of the fan. If the fan had 24 blades (or 48 if I have the wrong octave) then the whistle could be the fan blades, and the whine the fan itself.

One explanation could be that there's something asymmetrical about the fan, e.g. one blade is a bit too long and hits the housing when at full power. (Of course, this would make no sense from an engineering and reliability standpoint.)

What causes that far-lower-pitched metallic whine?

Edit: I just returned on a JetBlue flight, but also using an ERJ-190. Where before I was seated in row three, this time I was in row 24 of 25. On takeoff, there was only a loud roar; no "whine" or "whistle". So, it's pretty clear that the noises I'm referring to above are emitted from the engine intake. 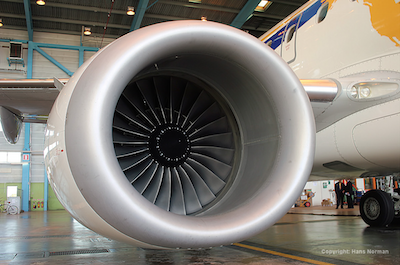 Sure enough, the intake fan has 24 blades. So, my above guess on the frequency ratio between my "whine" and "whistle" has some physical basis.

Could it be that the "whine" always exists in the frequency spectrum, but it's just below our human ear detection threshold (both pitch and amplitude) during low rpm operation?

When the "whine" starts and ends, my impression is that yes, the pitch rises as it initially strengthens, and falls as it finally fails. However, its volume is strongly pitch-dependent, so that it is far quieter when running at 80% of the maximum pitch/RPM, and inaudible below that. It sounds as if that blade which purportedly hits the housing only does so above a certain RPM (again: this is what it sounds like, it almost certainly is not what is actually happening). More generally, my interpretation is that the cause of the "whine" only happens above a certain RPM.

Edit 2: @fooot was kind enough to point out another question that is basically a duplicate. My text and suppositions are (I think) a lot clearer, but the other question links to two videos that demonstrate exactly what I've been talking about:

Neither of the answers to the other question are correct; one focuses on the fan blade noise (too high-pitched) and the other on pressure equalization vents (not engine-speed related).

So basically we're looking at a rotational frequency of about 300 Hz. Well above the 20 Hz threshold for hearing, even if not at 100% power.

Where things get interesting is the fact that the human ear becomes markedly less sensitive to sounds below 300 Hz. So when the engine spins up from 200 Hz to 300 Hz, not only will the increased power probably produce more raw noise, it's also at a frequency that's more audible. But exactly how strong that effect is, is hard to describe. There's even a standard for this, specifically aimed at airplane noises!

Not sure what do you mean by "metallic", but the sound of the Embraer ERJ-190 engines is quite different from the sound of larger engines, like those of A-320s or B737s... I guess the fan does produce a much lower frequency sound due to much lower rotational speed. And at full throttle, the 190's engines really do sound "different" compared to lower power settings. I've even noticed some sort of buzzing cyclic variations, both in sound and some slight vibration too. Let's not forget the Embraers are lighter in overall weight and construction, and their feel is indeed different. Anyway, any prolonged contact between rotor and stator is not desirable or common. There is a "seal" of the labyrinth type, but it is non-contacting.

It's possible that you are hearing the blade tips 'brushing' on the honeycomb seals (it's what the blades seal into at the tip). Look up "Turbine shroud seals...."

Not the answer you're looking for? Browse other questions tagged jet-engine noise compressor or ask your own question.

5
Why do most A320s make that distinct scream on takeoff?
5
What is the major source of engine noise for non-propeller aircraft?

34
Why was there a rattling noise coming from the left engine of A319?
18
What causes descending aircraft to make a noise like a giant blown bottle?
5
What is the major source of engine noise for non-propeller aircraft?
1
Can a turbofan maintain torque when spinning fast?
5
What causes the "growl" of some large turbofans at takeoff thrust?
1
What does the term "loading" refers to when we talk about Blade loading and Stage loading in Turbomachinery?
0
On a axial flow turbo fan or turbo jet engine what comes first the rotor or the stator?
7
How will the Rolls Royce UltraFan provide reverse thrust?
18
Why does each fan blade have a different mass and frequency?