Aircraft Emergency Evacuation slide inflation system: Why is a mixture of CO2 & N2 used instead of pure N2?

I was intrigued knowing from this SE-Aviation post that modern, aircraft Emergency Evacuation-Slide inflation-cylinders are often filled with a CO2+N2 mixture.

Which gas is used to fill the evacuation slides of modern aircraft?

Intuitively the reason behind the CO2 addition instead of using simply pure N2 is not very obvious to me. Digging deeper into the technology, Wikipedia reveals that "The CO2 is used to slow down the rate at which the valve expends the gases."

Any idea about the science behind this? Why would CO2 slow down the inflation rate? And why do we want to slow the inflation in the first place? Fabric damage?

Also, what is the CO2 percent in the mix, anyone know?

Let me first give some background information on the art of inflating an evacuation slide. There are two ways to fill them:

Operation of a hybrid inflator

The typical gas generator uses solid ammonium nitrate which is electrically ignited and produces nitrous oxide (N$_2$O) and water (H$_2$O) when heated. Nitrous oxide will exothermically decompose into nitrogen and oxygen when heated above 650°C or 1200°F, so even more energy and gas is produced. Note that the decomposition of two moles of nitrous oxide will produce two moles of nitrogen (N$_2$) plus one mole of oxygen (O$_2$), thus adding 50% more gas volume. This hot mixture of nitrogen, oxygen and steam is then piped into the pressure vessel and mixes with the gas flowing out from it, thereby heating the emitted gas.

The pressure vessel contains gasses like nitrogen or carbon dioxide. Other candidates are argon or helium, but their higher price has held them back. To increase the yield from the pressurized gas, the trick with the nitrous oxide can be repeated here: By storing nitrous oxide in the pressure vessel, again 50% more gas volume can be produced from what is stored, while the exothermic decomposition produces additional heat that offsets, to some extent, the heating of the stored gas.

Nitrous oxide is also attractive because it offers the best manufacturability, storage and handling of the possible decomposable gas source materials. Although classified as an oxidizer, in practice it is generally nontoxic and non-corrosive and is relatively inert up to temperatures of about 200°C. Also, nitrous oxide, as compared to gases such as oxygen, nitrogen and argon, liquefies relatively easily at ambient temperatures - helpful when the gas in the pressure vessel is stored in liquefied form to reduce its bulk.

Heated to its decomposition temperature, pure nitrous oxide will undergo a rapid disassociation chain reaction unless a coolant gas is added to absorb some of the heat generated by the exothermic reaction. Therefore, the mixture in the pressure vessel contains 50% or more of carbon dioxide which has a latent heat of vaporization of approximately 66 Calories per gram. As a three-atomic gas it is better suited for this task than two-atomic alternatives. Thus, it does not serve as a diluent (as aeroalias wrongly states), it absorbs heat and stabilizes the disassociation process.

Why a mixture of nitrogen and carbon dioxide

Now we can answer your question: Nitrogen is contributed both by the pyrotechnic gas generator and by the compressed gas and is produced from the dissociation of nitrous oxide (N$_2$O). Carbon dioxide is added to dampen the exothermic dissociation and absorb some of the heat produced. Without it, the gas generator would experience a runaway chain reaction! Its concentration in the compressed gas is between 50% and 75%, so the concentration in the gas generator mix is around 35% to 50%.

The high speed flow of gas from the pressure vessel is now piped through an aspirator, which sucks in ambient air by using the Venturi effect, and from there into the slide. This contributes up to three quarters of the total gas in the slide, so most of the nitrogen in the slide is from ambient air. In the slide, the concentration of carbon dioxide is diluted to around 10% to 15%. 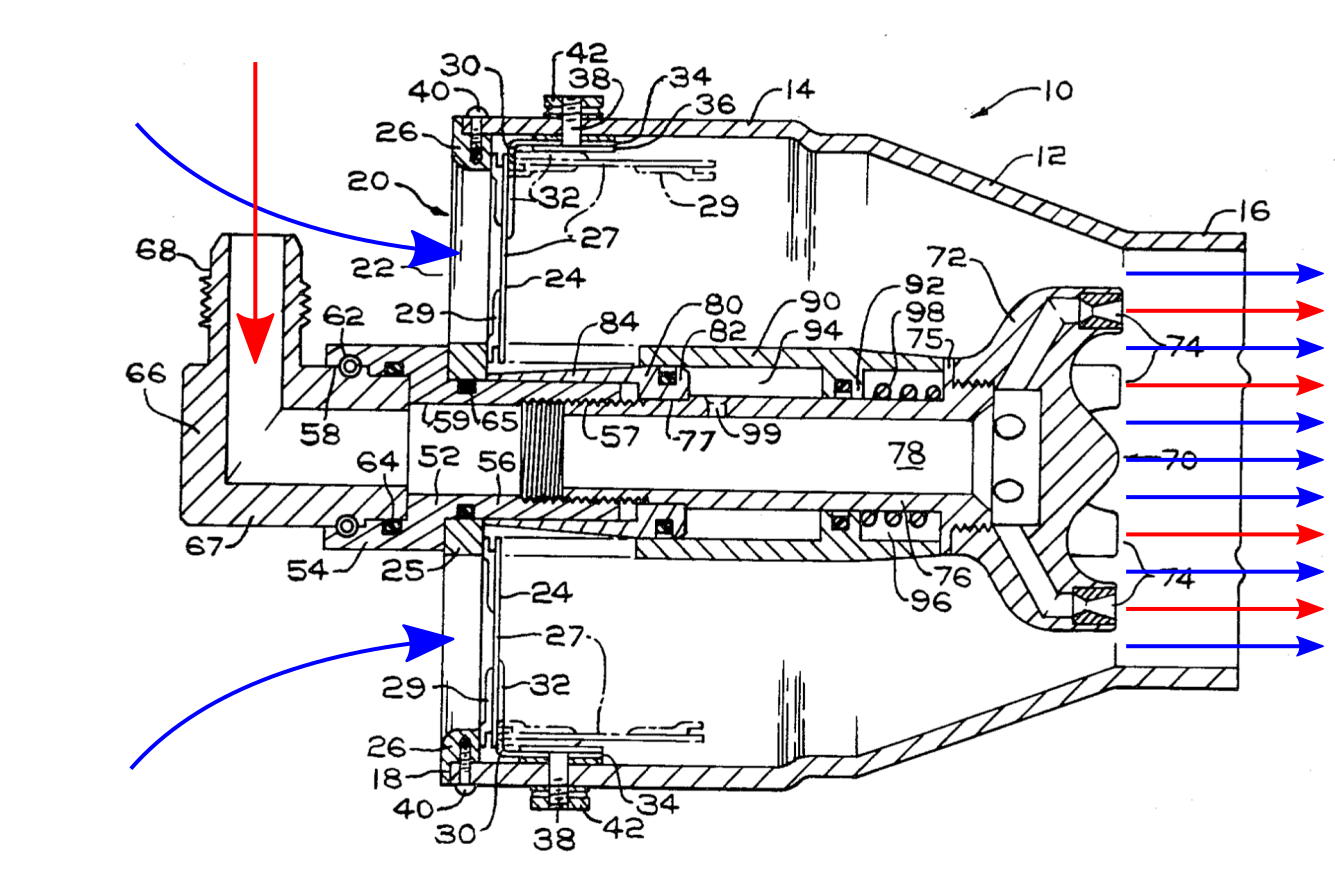 Aspirator (from BF Goodrich's US Patent 4368009). High-speed gas from the gas generator (red arrows) enters from the angled pipe on the left and pulls ambient air (blue arrows) with it when shooting from the nozzles on the right. Contrary to aeroalia's claims, an aspirator is not just another name for a gas generator, it is an entirely different thing altogether.

The amount of gas required for inflation of the slides in the aircraft is quite high. If all these are carried in pressure vessels, either of the following has to be done

Also, a gas generator (usually pyrotechnic) can be used, which generates gas by exothermic reaction. This too, has its disadvantages:

The size of the gas bottle can also be reduced by using an aspirator, which draws in ambient air to mix in a ratio of about two-thirds air to one-third gas from the bottle.

To overcome these, the aircraft slide inflation system uses is hybrid system that uses two techniques:

In case the amount of gas required is low (for example, in some helicopters), only the pressure bottles are carried.

Not the answer you're looking for? Browse other questions tagged emergency-slide or ask your own question.

31
Can the emergency slide be re-used after it has been deployed?