What wind change gradient is necessary to be classified as wind shear?

What is the actual change in wind direction or speed over altitude for a wind shift to become considered wind shear?

On one hand this has to do with how wind shear is actually reported which makes it tough to put an official value on it some times. Wind shear is often reported by pilots when they experience it on landing, takeoff or in the air. This may come in as a PIREP and be disseminated out to other pilots. When you are actually in the left seat you will see the manifestation of wind shear as a sudden loss of airspeed or severe weathervaning of the aircraft. There are many conditions that may cause a pilot to report wind shear. Since different planes at different times may experience different conditions its somewhat subjective.

The Wikipedia definition puts it at:

The FAA has a nice briefing on it here and their definition (as official as its going to get) is:

As with so many things associated with weather, there is no absolute rule, but a couple of clues tell you that wind shear may occur:

These winds can change direction by as much as 180 degrees and reach velocities of 100 knots as far as 10 miles ahead of the storm. The gust wind speed may increase by as much as 50 percent between the surface and 1,500 feet, with most of the increase occurring in the first 150 feet.

One particularly bothersome aspect of temperature inversion shears is that as the inversion dissipates, the shear plane and gusty winds move closer to the ground. In some areas of the Southwest, a 90-degree change in direction and 20- to 30-knot increases in surface winds in a few minutes are not uncommon

Some airfields are close to mountain ranges, and mountain passes are close to the final approach paths. Strong surface winds blowing through these passes can cause serious localized wind shear during the approach. The real problem with such shear is that it is almost totally unpredictable in terms of magnitude or severity

From personal experience low level wind shear can really do a number on small planes. Bigger planes with more mass will still be affected but less so from what I hear. I have seen speed drops of 15kts momentarily and heading shifts upwards of 30 degrees on final approach in a Piper Warrior in even light shear conditions. 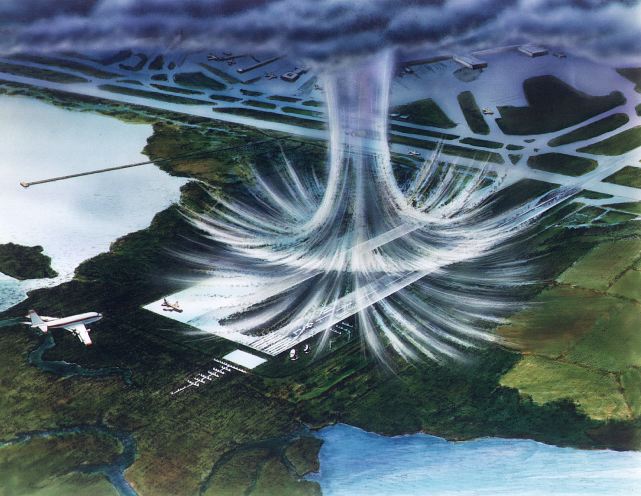 Some airports (110 in the US so far) have been lucky enough to have Low Level Wind Shear Detection Systems installed which are pretty neat units, they will detect that as:

LLWAS wind shear alerts are defined as wind speed gain or loss of between 20 and 30 knots aligned with the active runway direction. "Low level" refers to altitudes of 2,000 ft (610 m) or less above ground level (AGL)

Here is a pretty neat overview from NASA of the various methods to detect it in the air.

'Wind shear' isn't defined by a certain gradient, but by the fact that there is a change in wind speed or direction (not necessarily with altitude). When flying through a wind shift, you experience wind shear. The strength of the turbulence experienced when flying through changes in wind varies with the exact situation and size of the aircraft.

From the Pilot/Controller Glossary:

WIND SHEAR - A change in wind speed and/or wind direction in a short distance resulting in a tearing or shearing effect. It can exist in a horizontal or vertical direction and occasionally in both.

Technically, 'short distance' could imply gradient, but for all practical purposes that is over-thinking the definition and I don't think this line exists.

As voretaq7 notes, 10kts of wind fluctuation within 2000 AGL is defined as an Urgent PIREP. There is not a time-window though, so a sufficiently loose definition of instantaneous is assumed.

So to answer the question: one that you can feel.

Not the answer you're looking for? Browse other questions tagged wind windshear or ask your own question.

14
A321 Two unsuccessful strong crosswind landing attempts. What was actually going on?
5
How strong must wind gusts be to prevent landings and takeoffs?
1
Do airplanes have a maximum headwind gust component when landing?

13
Can wind shear conditions be identified visually?
14
Wind speed over which a Canadair fire fighting plane cannot safely fly?
9
Why would aircraft take-off in the opposite direction as landing despite wind direction?
0
How can I consider a UAV thrust power for wind effects?
7
How would a low-airspeed fixed-wing drone be designed to reduce effects from gusts and wind shear?
10
How long does a wind shear last?
4
Is extreme wind shear an official classification? Is it rare to land in 65kts headwind, gusting 95kts?
0
Wind shear questions
1
Why do gusts change the airspeed during landing, but turning (which changes where the wind is coming from) does not?