What is this racetrack-shaped Special Use Airspace, and why isn’t it on the VFR sectional?

What type of SUA is AR633A, the cyan racetrack-shaped SUA north of Knoxville, Tenneessee (KTYS) depicted below on sua.faa.gov?

Why doesn’t it correspond to anything on the VFR sectional? 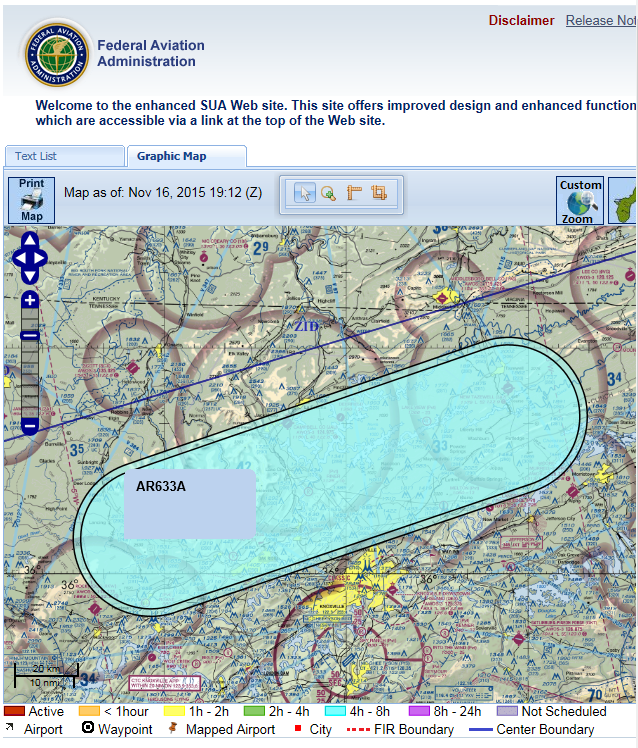 This is indeed a designated air refueling track used by military tanker aircraft (all AR-nnn SUA areas are, and they all share that same general racetrack shape).

The reason why it isn't on a sectional is because it's simply not a concern to anyone who isn't in a high-performance, high-altitude airplane -- air refueling (of fixed-wing birds at least) typically takes place well into the FLs (FL280-FL330 is typical, although it may be lower or higher depending on what the tanker is gassing up), and doesn't bother anybody below.

The cities of Oak Ridge, Knoxville, and Rockwood lie beneath AR-633, a volume of airspace used by the 134th Tennessee Air National Guard Air Refueling Group for practicing air refueling (Sect. 2.2). Although under military jurisdiction, this designated airspace is equivalent to an FAA holding pattern. AR-633 has an airspace volume of approximately 97 statute miles x 41 statute miles x I statute mile in depth. Refueling operations take place within this box of airspace. Because the military has jurisdiction over this volume of airspace and operations may be considered sensitive, it is impossible to determine whether refueling operations by the 134th Air Refueling Group occur directly over the Oak Ridge reservation. The Oak Ridge reservation encompasses an area of approximately 58 sq mi; the refueling area used by the military (AR-633) encompasses 4,000 total sq mi.

The Text List Help for sua.faa.gov defines the AR Special Use Airspace type as

DEFINITION: An aerial refueling route is airspace used by military tankers that routinely refuel other military aircraft along published altitudes (in most cases above 10,000 feet AGL).

PURPOSE: Aerial Refueling Routes are identified to inform non-participating pilots of the potential danger from activities being conducted. This airspace is not prohibited as long as other aircraft provide vertical or lateral separation from the refueling aircraft. Contact the assigned FSS for AR details.

7
What is the difference between fixes and waypoints on an arrival plate?
4
What is the difference between SUA (Special Use Airspace) and FUA (Flexible Use Airspace)?
6
Why are so few heliports depicted on sectionals?
10
What is the primary reason that the non-towered airports ACV, TVL, SGU, BIH, and SIT/PASI have E4 extensions to E2 airspace?
1
Has there been a recent change in the airspace configuration at KFYV-- Drake Field near Fayetteville AR?
3
Why are KACV and KTLV depicted differently on sectional charts than KSGU, KBIH, and KTPL, even though each is E2 w/ E4 extensions?
2
Considering all US untowered airports, what is the furthest distance that E2 airspace (dashed magneta line) projects from the airport?
4
Were planned release dates skipped in 2020 for the VFR sectional charts for Juneau Alaska and Dutch Harbor Alaska?
4
How far in advance of "effective date" are VFR sectional charts usually made available? (US)