Why did the CL-400 Suntan have engines on the ends of its wings?

I've been reading more about the development of the A-12, which in turn referenced the CL-400 Suntan. I noticed that the engines are located at the end of the wing, rather than integrated with the fuselage or on the midpoint, which is not something I've seen (or at least noticed) on any other aircraft (the closest thing I'm aware of is tip jets on helicopters). What is the design rationale behind locating engines on the end of the wing, and indeed for other locations?

The Suntan project needed all fuselage space to hold three tanks for liquid hydrogen, so the engines had to be placed somewhere else. Placing them near the fuselage would put them in the range of the fuselage's shock waves. Putting them out on the wing would help with wing bending relief and ensure a clean intake flow. Once they are so far out, you can as well put them on the wingtips, so that they do not cause a pitch-up moment. On the SR-71, the engines were also placed outside the fuselage and into the wing's plane, much for the same reasons.

Keeping the intake flow uniform is paramount for the undisturbed operation of supersonic intakes, and I assume that Kelly Johnson wanted to make sure that the engines would not suffer an unstart when flying reconnaissance missions over hostile territory. With the little experience in supersonic flight in 1955 it was prudent to avoid built-in pitching moments - after all, the supersonic L/D likely was in the single digits, so an out-of-plane engine placement would had produced more moment than on subsonic aircraft.

Hydrogen was selected to achieve the highest possible flight altitude, so the aircraft would be safe from surface-to-air missiles for as long as possible. I initially thought that the wingtip location would enable to cool the hot wing structure by heating up the hydrogen on its way to the engine, but heating was planned to be done with bleed air in a special heat exchanger. Quoting www.history.NASA.gov:

The CL-400 design divided the hydrogen tankage into three sections; the forward tank had a capacity of 67 000 liters; aft, 54 000; and center (sump), 15 000. The two main tanks were kept at 2.3 atmospheres pressure and the sump tank slightly lower for fuel transfer. In the sump was a booster pump, built by Pesco Products, that supplied liquid hydrogen to the engines at a pressure of 4.4 atmospheres. The engines were mounted at the wing tips, which meant that the liquid hydrogen had to pass through a hot wing with surface temperatures up to 436 K. The design provided a vacuum-jacketed, insulated line for this purpose.

Regarding the perceived danger of using hydrogen, www.history.NASA.gov says:

Tests were devised in which tanks containing liquid hydrogen under pressure were ruptured. In many cases, the hydrogen quickly escaped without ignition. The experimenters then provided a rocket squib (a small powder charge) to ignite the escaping, hydrogen. The resulting fireball quickly dissipated because of the rapid flame speed of hydrogen and its low density. Containers of hydrogen and gasoline were placed side by side and ruptured. When the hydrogen can was ruptured and ignited, the flame quickly dissipated -, but when the same thing was done with gasoline, the gasoline and flame stayed near the container and did much more damage. The gasoline fire was an order of magnitude more severe than the hydrogen fire. The experimenters tried to induce hydrogen to explode, with limited success. In 61 attempts, only two explosions occurred and in both, they had to mix oxygen with the hydrogen. Their largest explosion was produced by mixing a half liter of liquid oxygen with a similar volume of liquid hydrogen. Johnson and Rich were convinced that, with proper care, liquid hydrogen could be handled quite safely and was a practical fuel-a conclusion that was amply verified by the space program in the 1960s. At the time, however, Johnson and Rich filmed their fire and explosion experiments to convince doubters.

When work on Suntan started, liquid hydrogen was a laboratory curiosity. Preparing the infrastructure needed for operating the CL-400, the Suntan project led to the building of large-scale liquid hydrogen plants. Their availability paved the way for the cryogenic rockets of the Apollo program!

Interestingly, a similar engine location was selected by the Russian design bureaus Tsybin for their NM-1 and Myasishchyev for their M-50 supersonic bomber in the mid-50s. It was started after news of the US Weapon System 110 (which later led to the XB-70) reached Russia and was similarly cancelled after two prototypes had been built and only one aircraft had flown. 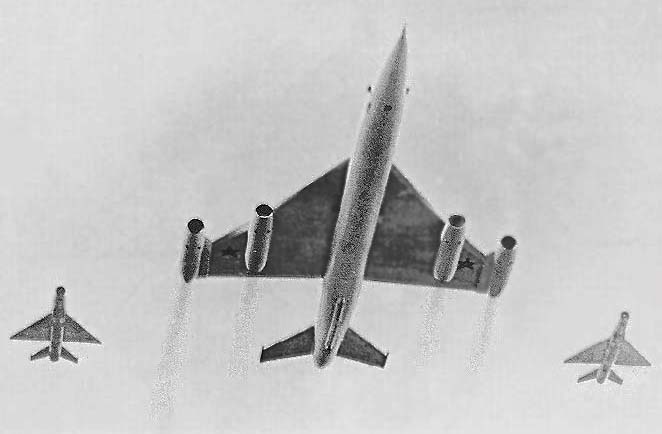 M-50 during display in 1961 at Tushino airshow (picture source). Note the similarity of the Mig-21 and M-50 planform - both originated from the same work done at TsAGI.

Placing the outer engines below the wing would had caused ground contact on rotation. Speaking of rotation: The M-50 had two central gears and the bomb bay between them, and the main gear had to be placed so far aft that the M-50 could not be rotated the usual way with the elevator. So the engineers devised what they called the "galloping bicycle". When the aircraft reached 300 km/h, the forward gear rapidly extended to rotate it to 10°. Placing the outer engines B-58-like below the wing would had required an even longer gear.

The position of the engines on wing is determined by a number of factors:

The CL-400 had its engines in the wingtips, that freed up the fuselage to carry the fuel. A similar arrangement was found in the Myasishchev M-50 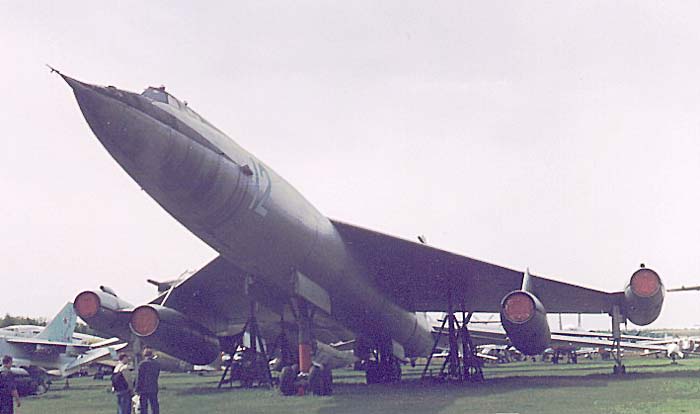 Both were designed to be high speed, long range aircraft, with neither fulfilling their requirements.

Another aircraft with wingtip engines was the French Trident, which was expected to be a rocket powered interceptor.

"SO.9000 Trident" by Deep silence (Mikaël Restoux) - Own work (Bourget museum, in France). Licensed under CC BY-SA 2.5 via Commons.

Also, some P-51s were fitted with wingtip rocket ramjets for increasing their speed. 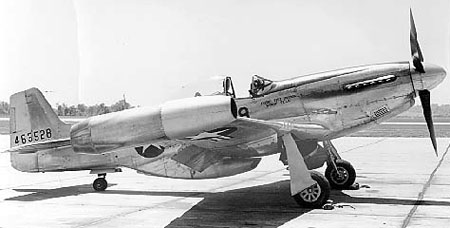 113
Why does it take so long to develop modern military jets?
33
How does the mounting location of a jet engine affect aircraft performance?
14
Has anyone burned hydrogen in a gas turbine?
13
Why locate engines far from the fuselage in some aircraft, such as the SR-71?
5
Does tailless means no tail at all?
9
Are tripropellant jet engines a viable way to increase fuel efficiency for large commercial airplanes?
7
Is it practical to integrate turbofan or ramjet engines into an airliner wing?
2
Would there be any benefit in placing the aircraft engines on the elevator (end-tips)?
1
Are there any aircraft powered by tip jets in the propeller blade?

17
Why does the Beech Staggerwing have its low wing ahead of the high wing?
21
Why do (almost) all military transports have high wings and civilian transports low wings?
5
What are the advantages and disadvantages of have the wing positioned further aft on an airplane?
6
What are the differences between wings made for 2 engines and wings for 4 engines?
4
Why do aerobatic planes have symmetrical wings?
11
Airplane gently rocking its wings during whole flight
3
Why do airfoils in an airplane's wings have different shape and size along its span?
5
Why did Concorde have a large anhedral?