Why is the gear handle shaped the way it is?

In the aircraft cockpits I've seen, the gear handles all seem to have the same general shape (they look like a little wheel). Is there a reason for this beyond simply making it absolutely obvious that it's the gear handle?

It's required by law, at least in the US. 14 CFR 23.781, Cockpit control knob shape specifies these shapes for the flap and gear controls on smaller aircraft: 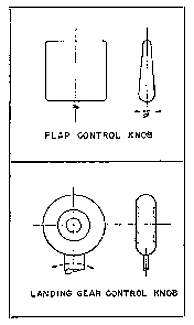 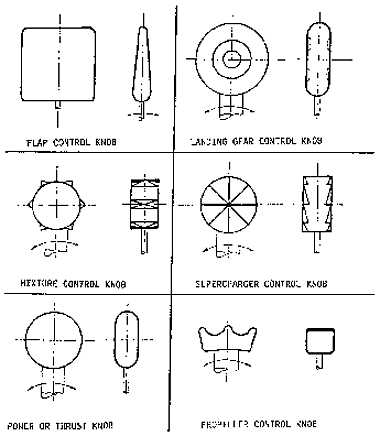 As for why those shapes are specified, it's for at least two reasons:

As others have noted, there have been accidents in the past caused by pilots using the wrong controls, and this is one reason why the FAA decided to do something to standardize them. Parts 23 and 25 also state where the controls should be placed, for the same reason.

There have been many cases of the pilot mistakenly grasping the wrong handle and retracting the landing gear, instead of the flaps, due to improper division of attention while the airplane was moving.

They recommend - and I was taught - leaving the flaps alone after landing until clear of the runway (unless you have a good reason for retracting them earlier, like a short-field landing), then check and retract them with the statement "flaps identified and retracted". "Identified" in this case simply means that you're sure you have the right control in your hand. Some instructors even avoid touch-and-goes in complex aircraft (i.e. with retractable gear) because they feel the risk of retracting the gear rather than the flaps during the maneuver is too high; they stop and go instead, even if that means taxiing back for takeoff.

making it absolutely obvious that it's the gear handle

This is the very reason. Cockpit ergonomics are not only to make things easy to use but easy to tell apart. Here is an incident in a smaller plane as a result of flap handle/gear handle confusion. Here is an NTSB report on the same issue with Beech Bonanza

If memory serves this also happened on a bigger plane once (im trying to find the accident report).

There has also been a push to make cockpits at least similar across the board to avoid issues. The best example of this issue has been the difference between American and Russian made attitude indicators which offer the visual appearance of being reversed of each other. You can read about that here.

As for why there is specifically a little wheel on the lever you can check out this discussion over on airliners.net about that very topic.

1
What are the unique shapes of the weapons control switches in a F-14?

8
Will landing gear with wheel fairings keep spinning due to airflow?
14
What are the advantages and disadvantages of having landing gear doors?
9
What are these parts on STOL/bush planes?
22
Why do some A380 main wheels have no brakes?
2
What software is used for aerodynamic wing shape optimization?
7
Why are RC rotor blades different from helicopter blades?
56
Why does the F-117 Nighthawk look different than other stealth planes?
6
Do the landing gear modules rotate?
8
Have bi-wings been used without creating more drag?
12
Why wasn't the 737 MAX's landing gear lengthened enough to mount the engines under the wings, rather than in front of them?