I have some confusion concerning the ground effect. If we take two applications: Aircraft and Cars, they seem to have completely opposite effects.

From Ground effect (aerodynamics), we can read:

I can understand this, the air gets 'trapped' between the wing and the surface (and as consequence the pressure on the underside of the wing goes up)

However, from Ground effect (cars) we read:

Designers shifted their efforts at understanding air flow around the perimeter, body skirts, and undersides of the vehicle to increase downforce with less drag than compared to using a wing.

This kind of ground effect is easily illustrated by taking a tarpaulin out on a windy day and holding it close to the ground: it can be observed that when close enough to the ground the tarp will be drawn towards the ground. This is due to Bernoulli's principle; as the tarp gets closer to the ground, the cross sectional area available for the air passing between it and the ground shrinks. This causes the air to accelerate and as a result pressure under the tarp drops while the pressure on top is unaffected, and together this results in a net downward force. The same principles apply to cars.

This confuses me, as it seems that the same situation (a plate in the vicinity of a surface) causes two completely opposite effects.

If I have a plate under an angle close to the ground, will the air be trapped, creating an air cushion pushing the plate up, or will the air accelerate, causing the plate to be pushed down? Does it have to do with some degree of area decreasing?

It actually has exactly the same outcome! Well, in reverse.

Wings generate lift by forcing air down (one way or another, let's not go into details). When the wings are close to the ground, the air that is forced down can't get out of the way, resulting in a higher pressure.

Cars generate downforce by forcing air up. When air close to the ground is forced up, it can't be replaced by 'new' air easily. This results in a low pressure, sucking the car down.

The ground effect is thus exactly the same in either case: air that is either pushed out or pulled in, cannot be replenished quickly enough due to the ground being in the way. The difference in outcome is because a wing is attached at a positive angle w.r.t the ground, whereas a car is shaped like a very thick wing at a negative angle.

A comparison could be a hovercraft on the one hand, which is lifted off the ground almost exclusively by ground effect (if you were to drop a hovercraft from a plane, it wouldn't matter much whether it was powered up or not). On the other hand, a vacuum cleaner, which is sucked down to the floor exclusively by ground effect (indeed, Feynman's sprinkler experiment will tell you it is not sucked down because of the upwards acceleration of air - only the 'engine' part of your vacuum is forced down by momentum exchange. Test this by holding the vacuum in the air - you won't feel it 'pull' at all).

Because they are designed differently. As you've yourself pointed out, while an aircraft produces lift, the racecars produces downforce i.e. lift directed downwards. The following figure shows the design of the wing of an aircraft and the front wing of a racing car.

Basically, the downforce of the cars is the lift towards the bottom. 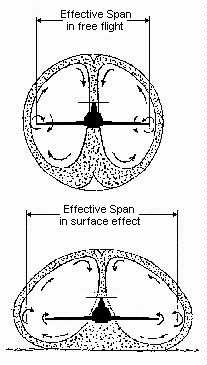 The net result is the increase in lift and decrease in (induced) drag.

In case of cars, the same thing happens, with the force in the downward direction. As the air is 'trapped' in the the gap between the suction surface (underside in case of a car) and the ground, it initially accelerates. As the height is reduced, the flow accelerates more, resulting in less pressure and more downforce.

Remember that lift means the downward acceleration of an air mass. This bends the aerodynamic force vector backwards, so a small part of the pressure force acts against the direction of motion.

If the ground blocks this bending, less of the aerodynamic force will be felt as drag. This is true regardless of the direction of this force - it can be up or down. The closer the distance between wing and ground is, the more this effect can be observed.

The car body acts also as a wing, albeit one with a small aspect ratio. All the racecar designers did is to replace the top-mounted wing (which did not feel much ground effect) by the car body itself (which is much closer to the ground). By keeping the entry area under the front bumper smaller than the exit area under the rear bumper, the car body acts like a wing at a negative angle of attack, and ground effect makes its downforce creation quite efficient.

Widening gap between car body and ground in side view (picture source). Skirts make this more efficient by preventing air entering from the side, but in the ever evolving tug-of-war between race car engineers and regulators they and some aspects of car bottom shaping have become less efficient in recent times.

There have been some great answers here with awesome information, but I don't think any of them address the premise of the question, which I believe to be incorrect.

The premise is that it is ground effect that is creating a force keeping the car on the ground. This is not accurate. A race car sticks to the ground because it is designed to overcome ground effect.

If a sufficient flow of air is allowed under the car, with a positive angle of attack, it will absolutely experience the same exact ground effect as an airplane does.

Conversely, an airplane can be driven all the way down the runway at cruise speeds without lifting off if you hold the elevator all the way in, though I wouldn't recommend doing that. Ground effect is not a magic levitation force, it simply reduces drag and it can easily be overcome. If not, landing would be impossible.

The bodywork of a race car is designed to overcome ground effect. The bottom of many race cars are also designed to maximize the advantage of low pressure, but this is not ground effect. This effect can be described anecdotally with the child's experiment of placing newspaper flat on a table on top a ruler, with the end of the ruler off the table, and then striking down on the ruler, which will break the ruler thanks to the air pressure on the top of the paper. When the car tries to lift off the road, the same force helps keep it stuck - but that force is not the "ground effect" that we refer to when flying an airplane close to the ground.

I think there is a lot of great information in the answers here but they miss the obvious. It's about the angle of attack.

Even a wing angled to point downwards close to the ground will not generate lift - it will create a lower pressure under/behind the wing (as well as a greater pressure above) and "suck" (and push) it down into the ground. And that is what is desired and designed with cars.

28
What is ground effect?
38
How does an aircraft form wake turbulence?
5
Can we borrow Formula One's ground effect for airplanes?
2
Why do the two different "ground effect"s used by aircraft and automobiles do opposite things in almost the same conditions?
0
How does a diffuser (in ground effect) accelerate the air in front of it?

33
Why don't helicopters always takeoff from a hover out of ground-effect?
5
Can we borrow Formula One's ground effect for airplanes?
6
How to keep a helicopter steady when close to the ground?
3
Would formation of the three planes benefit from increased distance of the ground effect?
9
Why is ground effect greater over smooth hard surfaces?
2
Why do the two different "ground effect"s used by aircraft and automobiles do opposite things in almost the same conditions?
1
What about a Plane-Train?
0
Why is the critical angle of attack lower in ground effect?
5
Ground effect and Lift coefficient