The Wikipedia article on the FIM-92 B variant of the Stinger Missile says:

In this version, the infrared seeker head was replaced by a combined IR/UV seeker that utilized rosette scanning. This resulted in achieving significantly higher resistance to enemy countermeasures (Flares) and natural disturbances. Production ran from 1981 to 1987, a total of 600 missiles were produced.

Do aircraft (or jet engines) really have a strong ultraviolet signature? If so, how is it formed? Is it only evident at high airspeeds?

(Also, what on Earth could it be talking about by "natural disturbances"?) 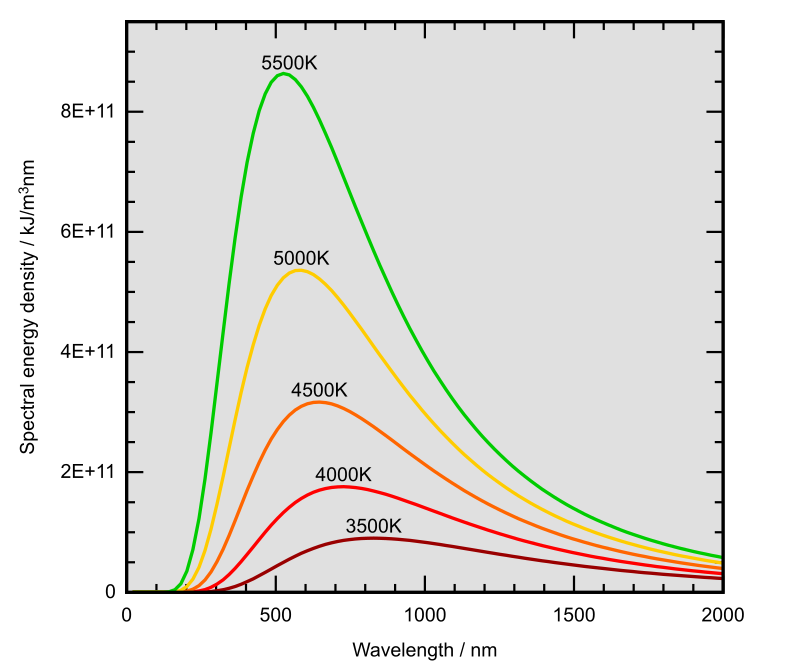 Natural disturbances means reflected sunlight off a polished aircraft surface or canopy, or off lakes or windows on the ground. Even after filtering by the upper atmosphere, sunlight will contain much more UV radiation than your average exhaust pipe, and glares were a big distraction to early thermal seekers. Sunlight would correspond to the green line in the diagram above, while the exhaust would be even below the dark red line.

Note that the absolute intensity also goes up with temperature, but would not help in identifying the temperature of a target if only one wavelength is observed. A more distant, hotter target would cause the same intensity than a colder, closer one. By sensing two wavelengths, the sensor could much better tell an exhaust pipe from other heat sources.

To answer the question directly: The UV signature of the aircraft itself is practically zero except for the reflection of the UV part of sunlight, and the active UV emission of a jet engine is extremely low and concentrated around its exhaust when seen from behind. Lighting the afterburner will increase the UV radiation, but it will still be much less relative to the IR radiation that that of, say, burning magnesium.

The exhaust plume of the jet engine that has radiation which flickers within the Ultraviolet Range and the ultraviolet light radiation that exists as a result of a pressure wave on the tip or leading edge of the aircraft that is moving fast enough to create a sonic pressure wave. Several different constituents of a jet engine – accretion flow; stellar magnetosphere; winds and inner parts of the accretion disk radiate in the Ultraviolet spectrum.

Also, what on Earth could it be talking about by "natural disturbances"?

In this context, what it means is that Infra-Red (IR) is the main method of tracking the target. Ultraviolet(UV) is used in addition to discriminate the target from flares and "natural disturbances" like direct sunlight or sunlight reflecting from clouds as they usually have totally different amount of UV radiation compared to the target. Basically they are referring to the Proportional Guidance system of the Stinger MANPAD. Since the primary job of MANPADS like Stinger is to stay locked on, the heat seekers’ fields of view are usually small to prevent distraction from competing sources.Seeker optics magnify IR/UV signatures emitted by distant aircraft,keeping track of the target aircraft is another matter altogether

In general, the aircraft (or its exhaust) does not have any appreciable UV emission.

MANPADS such as Stinger using a IR detector can be confused by launching flares that have the same (or similar) IR signature.

The reason the UV sensor was added was that that it can be used to discriminate the target by detecting the 'UV shadows' cast by an aircraft in a background sky radiance of atmospherically scattered solar UV. These will be different for the actual aircraft and the flares.

Some Soviet missiles achieved the same effect by using IR sensors in two different wavelengths, while most modern missiles have sensors of sufficiently high resolution to discriminate the target.

Contrary to the suggestions in replies to this question the UV seeker of the FIM-92 Stinger looks for the "shadow" created by an aircraft against the relatively bright UV background of the sky. The aiming and arming procedure of an FIM-92 with a dual-frequency seeker involves, amongst other things, aiming the seeker at a patch of empty sky for calibration purposes.

At night one imagines it reverts to the more basic modes alluded to above.

Still working on where I discovered the "point seeker at empty sky" calibration procedure.

16
What are the differences between pre-transistor and transistor era jet engines?
16
How do stealth aircraft reduce the Heat Signature?
13
Why do jet engines take a long time to throttle down?
5
What is the heat signature of a piston engine, relative to a jet engine?
14
What is this aircraft that has both piston and jet engines?
7
Are any jet engines used in combat aircraft water cooled?
4
How does an AMRAAM communicate securely with the aircraft that launched it?
16
Do the design and manufacturing of cruise missile engines and aircraft jet engines require the same amount of efforts?