What is the difference between a nacelle and a cowling?

I see these terms used almost interchangeably. To my understanding they both refer to the covering of an engine. Is there a technical difference between the two?

The definition of a nacelle refers to the housing of anything on the outside of an aircraft. Engines are the most common thing in these housings.

a streamlined housing or tank for something on the outside of an aircraft or motor vehicle.

The definition of a cowling is specifically a removable cover of the engine.

the removable cover of a vehicle or aircraft engine.

So a nacelle refers to the whole covering of an engine that is outside the plane, typically on the wing. The cowling would just be the removable part of this cover. As Jan Hudec commented, engines mounted in the nose, as is typical in smaller aircraft, would have a cowling to allow access and cooling to the engine, but technically not a nacelle, since the covering would be part of the fuselage.

The nacelle is a housing that is separate from the fuselage, that holds something, usually engines or some other equipment in an aircraft. The following figure shows some of the engine nacelles.

A cowl or cowling is any part of the aircraft (or engine nacelle) that can be opened or removed (for inspection etc.). The following image shows cowlings in a nacelle. 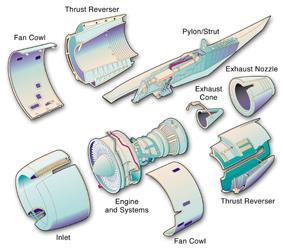 These are maintenance cowlings. Another type of cowlings (like NACA cowlings) serve to direct the airflow into the engine.

Nacelle comes from the french word "nacelle" which is the gondola or wicker basket suspended beneath a balloon. So, by analogy, many things that are outside the body of an aircraft, like the compartments that house the engines, can be called nacelles. A cowling is the covering of a vehicle's engine even if that motor is not inside a nacelle.

42
Why is tape being applied to this jet engine?