Why is there a plateau in helicopter H/V diagrams?

The "dead-man's curve" in a typical helicopter height/velocity (H/V) diagram is commonly referenced to indicate that "towering flight" is dangerous and avoided in general practice. (Simon explained, "The Avoid curve [outlines] the combinations of height and speed in which test pilots (i.e., the best) have demonstrated that a safe landing is possible if the engine quits.")

But H/V diagrams also have second envelope that is marked for avoidance. 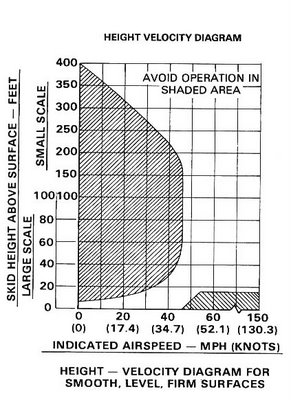 I don't know if this area in the lower right has an ominous name: If not perhaps we should call it the "dead-man's plateau?"

But why is it considered unsafe to fly at extremely low altitudes at indicated airpseeds above about 50 knots?

In a comment on this in the answer above Simon says, "At that speed, if the engine quits, the nose will pitch down and you will be on the ground, with no control and high speed, before you know what's happened."

Can someone elaborate on the dynamics of this? Why would the nose pitch down abruptly if the engine quits? If that's such a reliable effect would it not be trivial and worthwhile to have a torque-driven spring that bears on the cyclic, so if torque suddenly changes then the cyclic is just as suddenly nudged backwards?

In any case, one is left wondering if the full answer isn't more nuanced: The most striking characteristic of the dead-man's plateau is that it appears to be the height at which one enters ground effect. Is there some other aerodynamic phenomenon at play in high-speed ground effect flight?

Due to precession, the effect of this is felt 90 degrees later so instead of rolling to the left (or right, depending on which way the blades rotate) because of the dissymmetry of lift, the tail drops, therefore pitching the nose up. Whether this happens on a particular helicopter, and by how much, depends largely on the pitch stabilisers. However, helicopters are naturally unstable in pitch. You cannot take your hand of the cyclic and maintain a constant attitude, absent any autopilot or other automatic assistance.

As the helicopter accelerates, the pilot subconciously counteracts this by applying foward cyclic pressure. The higher the speed, the more forward pressure is needed to maintain altitude and the helicopter flies nose down. You fly a helicopter by "sight picture" to such an extent, that to accelerate, you pitch the nose down to give you the "65 kt picture", or the "100 kt picture", allow the aircraft to accelerate to the desired speed, then trim. The nose is pitched down a lot at 100 kts compared to say 50.

When the engine quits, assuming it's an instantaneous failure, there is nothing to stop that forward pressure forcing the nose down and at such low heights and high speed, losing 18 feet of height before the pilot reacts and pulls back to flare would be easy. Even if they react really quickly and flare without losing much more than 5 or 10 feet, there is a very real risk that the tail will strike the ground and at those high speeds, that will result in a really bad crash.

Let's assume that everything goes right. There is no time at that height to lower the collective and raise it again. You will also have a lot less than a second to flare so will lose very little forward speed. In the best case, you are going to land at 50 kts or higher with the collective in your armpit and the rotors already stalled, if not stopped altogether, and this is at best a bad crash, quite possibly fatal.

The most important thing to remember is that the shaded areas represent the flight regimes where test pilots, with instant reactions since they initiate the manoeuvre, cannot demonstrate a safe landing with no damage. This is at the edges of the shaded areas and once they get to the point of saying "one more foot, and we would not have had a successful landing", they stop exploring the envelope and draw the curve in the POH. To add a safety margin, the tests are done at max weight. Even so, the wise pilot will give those areas a wide berth whenever possible.

Why isn't there some automatic device to pull the cyclic back? Because you do not do this if the engine quits when in a hover or up to about 10 kts at low height. In the avoid area you ask about, it would need to pull, then push to level the skids again in the blink of an eye. It's different when hovering at 1,000 ft and different again if doing 90 kts at 1,000 ft. And that's before we add all the variables - pressure altitude, temperature, wind strength and direction.

To deal with all of this, you would need a very clever system loaded with sensors. Most people call such systems "pilots".

I would rather just avoid the shaded areas. It's no big deal.

9
Should helicopters fly when they the lack power for vertical climb out of ground effect?