Why was the Bell Boeing V-22 Osprey not worked on more? [closed] 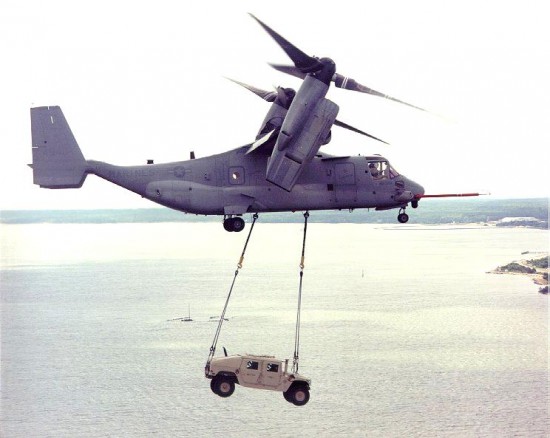 I've recently learned of the Bell Boeing V-22 Osprey and it appears to be a very advanced and useful vehicle. I can instantly think of reasons why the Osprey would be successful such as:

So my questions are:

1) Why hasn't the Osprey advanced/been successful. For example how the F-15 went to the F-16 then the F-35 etc.
2) What made Boeing choose to have rotors instead of the faster jet engine?

The only possible reasons I can think of are things such as:

Though I'm not sure of the real main reason as surely those reasons can be fixed.

Why was the Bell Boeing V-22 Osprey not worked on more?

The Osprey idea is an old one and it never worked well. For example, I have found a patent form 1921 (see the picture) for a flying machine that has some common points with the Osprey. Large diameter propellers are not efficient for planes and small rotors are not suitable for helicopters. A hybrid, like Osprey, has the advantage of not needing a runway to land or take off but at the same time, once in the air, it has to pay the price of using two inefficient propellers for flying hundreds of kilometers. Also, if it is used more as a helicopter the rotors are not as efficient as the ones of a true helicopter. 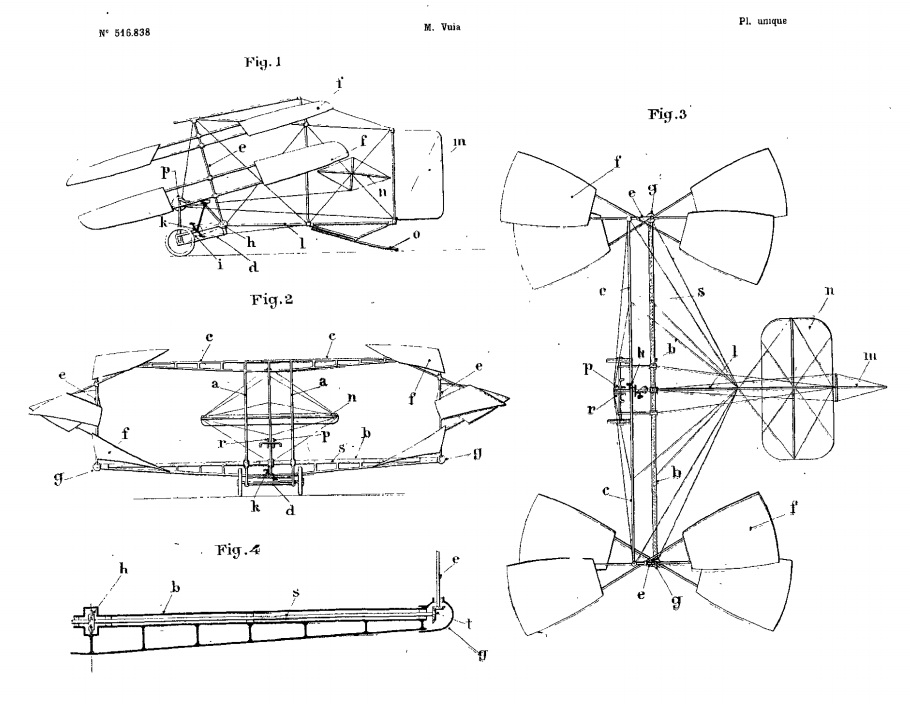 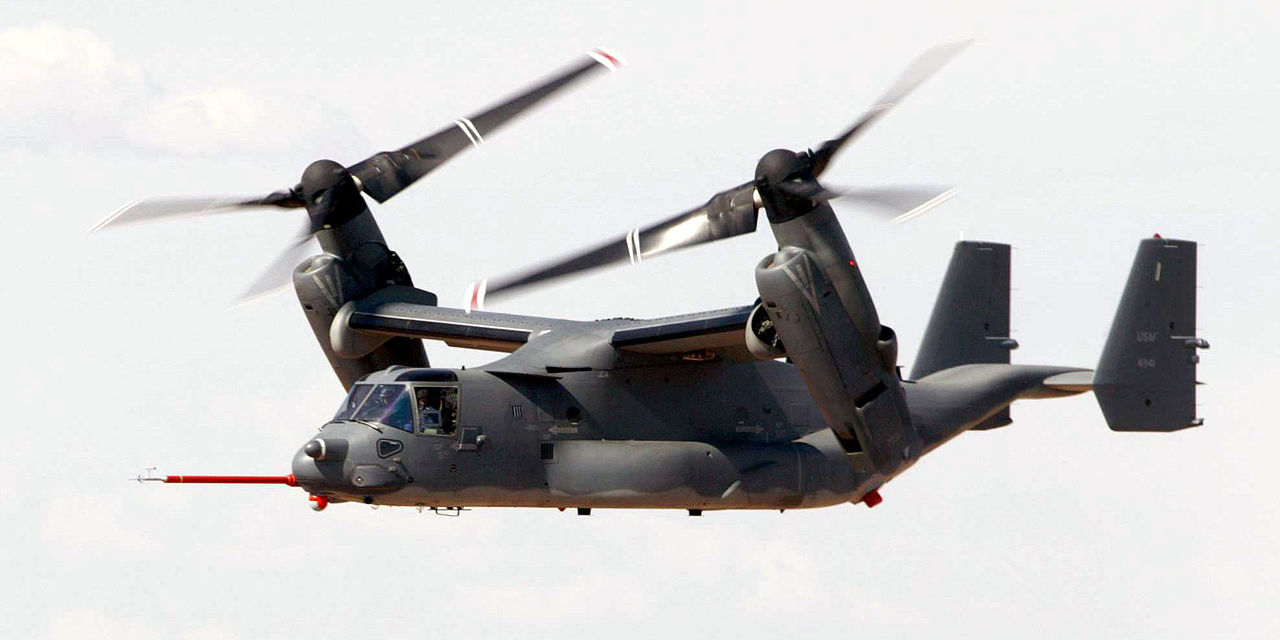 The Osprey has arguably been quite successful considering the circumstances. As Energizer777 points out, the basic idea is not new, and there were many engineering challenges to create a viable aircraft. That these challenges were solved and the plane is now in production and active service seems to be a pretty big success. Also, this has all happened relatively recently. The V-22 first flew in 1989 while the F-15 and F-16 both date back to the early 1970's (and are still in active service). The challenges in refining the design pushed introduction of the V-22 out until 2007. The design just hasn't had enough time to mature past the first successful application. You might consider the civilian tilt-rotor AW609, currently targeted for certification in 2017, as the next advancement of the design.

Props/rotors are more efficient than a jet engine at low speeds. Given that the slow and vertical portions of the flight are very important to the design, this decision makes sense. The prop wash also flows over the wing, allowing the wing to be more effective with a short span. Using turboshaft engines rather than jets also allows one engine to drive both rotors if the other engine fails, making single engine operation easier.

You are right about the drawbacks of the design. The V-22 is noisy and not as agile has a helicopter in slow flight. Maintenance requirements are high and were certainly an issue early on in the introduction to service. And upfront costs are also more than a helicopter or airplane of comparable size. However, the capabilities you listed first are worth these added costs, at least to those that have purchased/ordered the V-22.

It doesn't need to be updated

It already does everything the Marines need it to do. Replacing it would be expensive for no reason.

Transport aircraft, however... what would you improve? It's already about as fast as it's going to get without a lot of money being spent, and as capable.

Quite simply, there's no need to replace it yet. That doesn't mean it's been unsuccessful.

I'd argue that it's been quite successful. Think various comments have cleared that up, as well as modifying your definition of "successful."

A necessary forerunner to it was the XV-15. Yes, there were earlier aircraft, but this didn't work well until smaller turboprop engines, with sufficient power density became available. Prior to that, the engines were usually located in the fuselage and had driveshafts carrying the power to the nacelles on the wingtips. These were heavy and prone to failure.

As for why the Osprey has props/rotors instead of jets, let's talk about thrust and power. To get off the ground, you need more thrust than you have weight. Typically, if you're going to do VTOL, you need 110% as much. So a 2,000 pound aircraft needs at least 2,200 pounds of thrust to takeoff vertically, much less hover. Hover requires even more.

There are multiple ways to make thrust:

If they could've done it with a single rotor, and found a way to angle that forward for "airplane" mode, they'd have done so; a single, large rotor would be more efficient than a pair of smaller rotors. The simplest mechanism they could develop, which would provide the capabilities of both airplane and helicopter, was a twin-engine design. You get a faster cruise speed and a longer range than any helicopter in the inventory and a broader flight envelope than any airplane (VTOL and hover).

Additionally, you need a degree of agility for maneuvering in hover. So you need the ability to change the thrust vectors while hovering; the "airplane" flight controls (ailerons, elevators and rudder) are useless in this mode. To accomplish this, the props/rotors have collective and cyclic controls like a helicopter. If you flatten the pitch on the forward part of the rotation, that will change the thrust vector to push down-and-aft, instead of just down. Coordinate this between the two engines and you have translation forward/aft, side-to-side and pivot, just like a helicopter.

To my knowledge, no one has succeeded in making a jet engine which can do this.

A jet-engined variant would likely need some kind of 2D thrust vectoring, downstream of the actual engine. There are existing examples of this:

Assuming someone can come up with a usable 2D thrust vectoring system, mounted to the aft end of high-bypass turbofan (all the mentioned examples are turbojets, lower-bypass turbofans or rockets), it might be possible to do a jet-powered variant, at some point in the future.

Not the answer you're looking for? Browse other questions tagged military boeing or ask your own question.

13
What are the flaps on the exhaust of military airplanes for?
5
What is 2D and 3D thrust vectoring?
1
Does 3D Thrust vectoring (TVC) provide improved maneuverability over 2D TVC?

7
What UK aircraft looks like an Islander but with twin fins?
21
Could the Boeing 787-9 near vertical takeoff demonstration be performed by Airbus A350 aircraft?
11
Why was the engine of the Ju-87 Stuka not replaced with a more powerful one?
2
Why are there age limits to becoming a pilot in the armed forces?
3
Does an uncovered naval aircraft suffer any weathering affects?
0
Why did Boeing keep using yokes while Airbus moved on to sidestick?
7
Why did Boeing not create a new 737 instead of just upgrading the old model?
2
Why are some modern military trainer aircraft so bulky?