How does a flying wing keep from going into a flat spin when maneuvering?

How do flying wings, like the B-2 Stealth bomber, actually keep themselves from yawing out of control without a vertical stabilizer?

For the record, I assume this has to be a simple mechanics process. Why? Well flying wings go all the way back to the 30s. One of the earliest (and my personal favorite) is the N-9M, which was a scale model of the XB-35, a prototype bomber for the allies during WWII.

They didn't have flight control computers back then, and the only control complaints I recall them having is that early versions had a tendency to flip over backwards when approaching stall speeds, well, that and the ground effects were pretty strong. But, no mentions of going into flat spins when going into hard maneuvers (that I recall).

So how do they control that Y axis on flying wings? Are they perhaps more susceptible to a flat spin than a regular design (even if those risks can be kept to an acceptable minimum)?

Sweepback helps a lot, and the rest is achieved with drag devices near the wingtips. 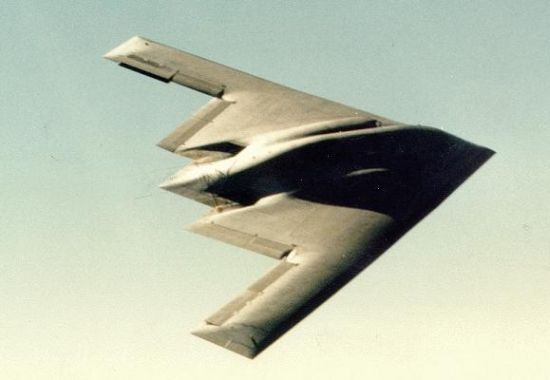 Did you notice that the B-2 has split ailerons, and they are partially opened during flight? Their drag pulls the wingtip back, and in combination with sweep the forward wing in yaw will have a longer lever arm, so the same drag produces a bigger stabilizing yawing moment.

Differential thrust is not available on gliders, and there are lots of flying wing gliders. Horten III and IV, Fauvel AV-36 and the SB-13 are some examples. The Hortens used speed brakes near the wingtips, and the SB-13 has rudders with differential deflection (70° outwards, 20° inwards) on its winglets to increase the yawing moment.

Directional control is no problem with flying wings, even though directional stability becomes weak at high speed when induced drag is low. Flutter and a low $c_{L max}$ are the real drawbacks. Ground handling, landing characteristics and payload space are others, but can be overcome somewhat.

And flat spins are not possible with flying wings. Their spin modes are all fairly steep due to the lack of a strong inertial moment from the lengthwise distribution of masses.

In the X axis, flying wings are stabilized the same as any other plane. Passive stability is achieved through a slight upwards dihedral between left and right wing.

Active stability is achieved through ailerons near the wing tips which create a controlled differential lift allowing the pilot or flight computer to control the roll velocity.

Active stability is achieved through elevator controls on this stabilizer, which increase or decrease the vertical force in one or the other direction.

In a flying wing this stabilizer is not present. Instead the rearward area of the main wing takes this role. For this to work, a stable flying wing needs to have wings that are significantly swept backwards in such a way that the overall torque force at both positive and negative high angle of attack is always decreasing this angle of attack.

Active stability is achieved through control surfaces at the very back of the wing. These are often the same control surfaces also used for Roll control, but deflecting in unison instead of opposite directions (Elevons)

Similar to pitch, the passive and active yaw control on conventional planes is done with a stabilizer fin with a rudder at the tail.

In true flying wings this is not present (Some don't even have winglets) But the high wing sweep (usually the wings of a flying wings meet at roughly 90° angle at the tip) causes a higher drag force at the forward facing wing if the craft yaws to one side, which enacts the required corrective force.

Active control is achieved by causing additional drag through some sort of braking flaps near the wing tips (the actual implementations vary - split elevons - separate break flaps - ...) This can also be augmented by using differential thrust.

(Note: The corrective force is much lower than that caused by a tail fin. As such a powered flying wing should have its engines relatively close to the center, otherwise a one-engine-out scenario would cause an uncorrectable yawing moment. This however limits the effectiveness of differential thrust if the craft is supposed to stay flyable in such a condition)

A speed stable plane has its nose pitch up at higher speeds and pitch down if the craft gets slower, thanks to the center of gravity being in front of the center of lift, which causes the nose to drop. This is balanced out by a (usually parasitic) downward force from the horizontal stabilizer acting at the tail of the plane. This arrangement of forces should also cause the nose to drop and the angle of attack to reduce in a stall situation.

As a flying wing does not have this stabilizer, a similar balance of forces needs to be achieved through a careful design of wing profile and twist. If you look at Horton flying wing glider designs for example, they have a "thick" profile creating the majority of lift in the center (which thanks to the wing sweep is also the front) Towards the end and back of the wings, the profile becomes thinner and more symmetric. At the same time, the wings are slightly twisted, so the intrinsic angle of attack is a few degree lower at the tip (and as such at the rear of the wing) than near the nose.

At high speeds, the front of the wing creates more lift than the back and rises the nose. This part has the highest wing load and will stall first, while the swept back outer wing area - thanks to its profile, lower AoA and lower load will not have stalled yet. The nose drops, and the control surfaces in this rearward part stay functional.

It should be noted that not all flying wing designs did achieve a safe stall behavior. Some, like early 1940's and 1950's American designs failed to implement stall stability correctly, while others (like the B2 bomber) the plane was deliberately designed aerodynamically unsafe to faciliate other features (stealth) which would have been compromised by a "twisted" wing.

Flying wings use differential thrust for yaw control instead of vertical stabilizers and rudders. Some also have small outboard rudders or spoilers for this purpose.

The first aeroplane to be certified inherently stable, the Dunne D.5 of 1910, had a tailless swept wing. A series of biplanes and monoplanes followed, all tailless swept types and some arguably flying wings with bits dangling off.

The key feature which made them stable in pitch was twisting down or washing-out the wing from root to tip, later described as "putting the tail at the end of the wing". (Some tailless types have used special airfoils with a stable centre of pressure, so that the usual destabilising movement with angle of attack is avoided.)

These planes were the culmination of a decade-long search for a plane which was not only stable but could right itself automatically from any position into which it was thrown. His friend HG Wells and licensee Starling Burgess (of the Burgess-Dunne line) both record his habit of jumping up onto a convenient platform and launching small paper models to illustrate the point (Many of these models survive in the Science Museum's archive collection).

To avoid stalling and spinning, the tail was joined to the wing and the incidence variation smoothed out along their common span so that there could be no sudden breakaway on one surface, rather it would begin at the root and the nose would then drop to restore smooth flow. The tips were arranged to give proverse yaw, so that banking into a turn would apply the correct amount of yaw for a smoothly coordinated turn. Part of this was imbued by actual downforce at the tips (recently incorporated in the Prandtl wing by NASA). The biplanes did indeed live up to his claims and one was flown safely across the Channel through a storm in 1913, conditions in which more than one conventional plane of the day vanished without trace. The monoplanes were slightly different, but their only vice was to stall totally and suddenly when flown too slowly, and "pancake" down gently in a superstall, much like a parachute (even they might have recovered eventually, but he never tried it at altitude).

Jack Northrop, who later pioneered the flying wing in the US, was a big fan of Dunne.

5
How do tailless aircraft yaw?
2
How can a flying wing style airplane recover from a spin without a vertical stabilizer?
1
How the German Horten Ho 229 flying wing can cancel the adverse yaw in turning?
1
How did the B2 Bomber achieve yaw
0
How does the B-2 Spirit fly without a rudder?
43
Is it possible to recover from a flat spin?
11
Why is the ball no longer centred in a multi-engine airplane with inoperable engine?
14
How does wing sweep increase aircraft stability?
9
How to recognize the horizontal winglet in the Horten design, or the experimental glider in this video?
13
Could a plane be constructed to be fly in fixed-stick roll-stable circles?
See more linked questions

14
How does wing sweep increase aircraft stability?
8
Where does the flat plate theory in this paper come from?
10
How is pitch controlled in a flying wing?
3
For a flying wing airfoil, which AOA is to consider when selecting Cl?
4
Is there a software to calculate parameters from certain inputs on a flying wing?
18
How do elevons work to roll a flying wing?
1
How does the advancing wing in a flat spin create nose thrust?
7
How does flying a helicopter compare with flying a fixed wing plane?
3
Does the Prandtl flying wing have a lower maximum speed than other designs?
1
How is washout built into a fibreglass wing?