How do you cope with an asymmetric flap extension?

How do pilots cope with an asymmetric flap extension? What are the procedures for this type of occurrence which I suppose are similar on all aircraft?

I'd guess the procedures probably vary considerably by class and type. If the flaps on one side broke or got stuck on the light GA plane I mostly fly, the procedure would be to just set the side you can control to the same as the side you can't control and land with that amount of flaps. You can land it with no flaps; you'll just have to land a little faster than normal and with sub-optimal visibility of the runway (but still plenty to get the plane onto it safely.)

At least in the planes I've flown, it would be nearly impossible for the flaps on both sides to get stuck in different positions (because both sides are mechanically connected to the flap lever,) but even that could be dealt with by using the ailerons to counter the asymmetry of lift.

The other procedure involved is to do a proper pre-flight and make sure your flaps aren't broken, loose, or damaged before you leave the ground. :)

This will vary between small planes and large planes as a result of the flap extension mechanisms and how they can possibly break. This recently happened to my instructor and we had a long discussion about it so...

Before we dive in, it should be noted that the FAA recommends that while in the traffic pattern you do not extend the flaps while banking, in the event of an asymmetrical extension it may push you further into the turn.

In smaller planes (GA sized stuff) there are 2 basic flap mechanisms, electric and mechanical. The common Piper Cherokee line (all the way up through the early saratogas) employed a Johnson bar and all mechanical flaps. On the contrary Cessna moved the 172 to electrically driven flaps early on in its production.

As for what to do this will depend on how it fails. In the Piper there are retract springs in the flaps so if the extension mechanism fails the flap will remain in the retracted position. Generally what fails on the pipers is the bolt that holds the push rod onto the flap or the nut comes off due to a faulty pin although the cables can fail as well. The rod looks something like this 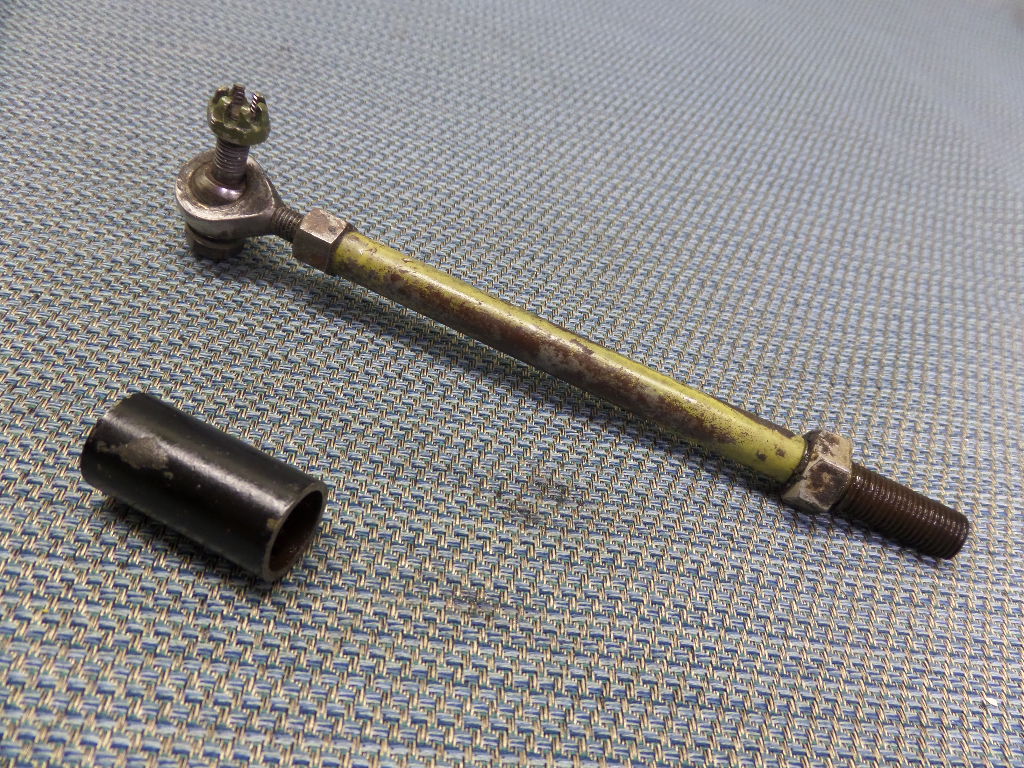 Edit: I went flying this morning and got a picture of the flap pushrod joint on the Piper Warrior I was flying to show it in action. Here the flaps are fully deployed (3 notches) during my preflight check. As you can see checking that joint is critical, and you should always inspect to make sure the pin is properly in place through the nut. In this case you are looking at the head of the pin so its a bit hard to see but its there. 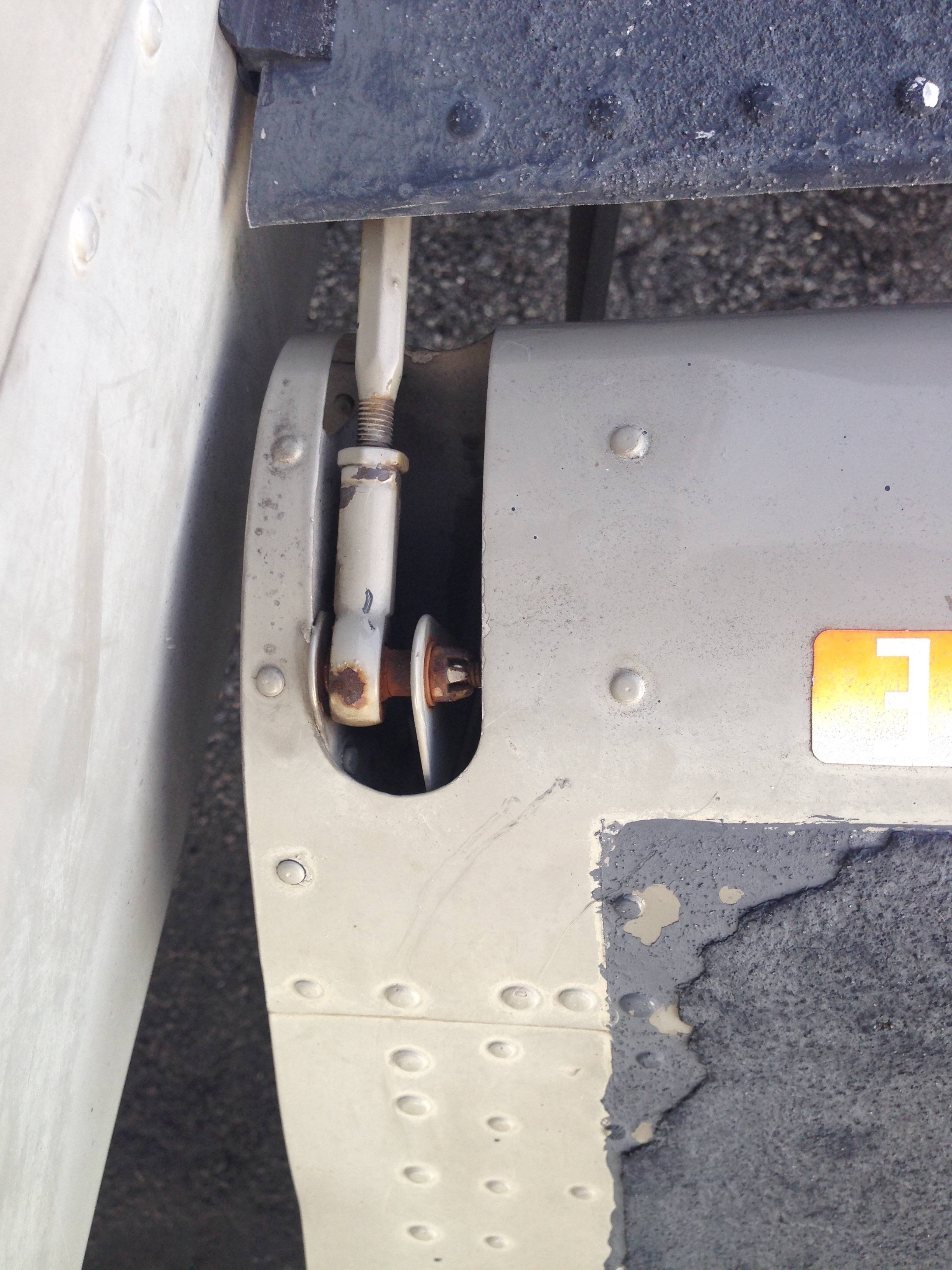 In any case generally speaking releasing the Johnson bar will retract the other flap and you will make a no flap landing (runway provided). In this instance if you have the fuel it may be advised to divert to an airport with a longer runway. You should also practice some no flap landings during you training for this very reason.

In the electric planes if any of the extension mechanisms break and you can still retract the flaps adhere to the procedure above. However in this case you could also have a drive motor failure or other electrical issues. For this you may be stuck with your flaps in a partially extended state. Some amount of aileron deflection will be required and you should expect higher landing speeds. Again diverting to a longer/wider runway may help. Care should be taken in the pattern turns in this case as well.

Considering the redundancy in commercial airliner systems this is less of an issue for larger planes. On top of that since large planes generally have multiple engines you can take advantage of differential power settings as well as cross control. Large planes also generally have more than one set of flaps that are often powered by multiple sets of hydraulic pistons which are unlikely to all fail in tandem. While you can have an asymmetrical extension on a commercial airliner chances are it would not be like that of a GA plane where you run the risk of a full extension on one side and no extension on the other.

On the Boeing aircraft I fly the flaps and slats are both fitted with an asymmetry protection system. When an asymmetry is detected the flap motors are stopped and you are stuck with the flap/slat where it is. If its the slats that are stuck you can still move the flaps with the alternate system and vice versa.

The (Quick Reference Handbook) QRH advises the actions necessary in using the alternate system and the reference landing speeds required, depending on at what stage of extension or retraction the asymmetry occurred.

10
How does a flap load relief system work?
15
How does the particular piece of flap behind an engine on a B777 work?
36
Is an Airbus A319 allowed to fly with a missing flap track fairing?
16
Is it very rare to be a senior pilot with no emergency occurrence in history?
1
What backup systems are in place for flaps actuated by sliding block guides?
0
How do airplane designers determine flap deflection angles for flaps of various % wing chords?
0
Is flap-asymmetry protection on airliners still active even on the ground?