Are control inputs different during autorotation?

My understanding is that during power-off autorotation the main rotor is still coupled to the tail rotor, and the flight controls execute the same functions as during power-on flight. Two questions:

A certification requirement of helicopters with powered controls is that they have a manual reversion so that control can be maintained in the event of a power failure. However, the controls can be really heavy with no power and accidents have occurred when hydraulics have failed at critical moments or pilots have lifted off with hydraulics off and have been caught by suprise with the effort needed to maintain control.

The control inputs during autorotation are the same. For any given glide, or flare, the lift required is the same powered or unpowered. Lift is proportional to the speed of the blades, which is independent of powered or unpowered, and the angle of attack.

During autorotation, since the airflow is from below, rather than above, the pitch required is lower for the same angle of attack to generate the same amount of lift. So, the swashplate is lower in autorotation but lowering collective still decreases lift and raising it increases lift. The primary difference is that rather than controlling lift and power, the collective controls rotor speed since increasing pitch increases the angle of attack which increases lift and therefore increases drag, slowing down the rotor. Lowering the collective has the opposite affect.

The cyclic control is the same in all respects (you tilt the rotor thrust in the direction you want to go) since it increases, or decreases the pitch, and therefore the angle of attack, cyclically. The movement of the swashplate about the X and Y axis is independent of the position of the swashplate in the Z axis.

The pedals work in the same way too.

In summary, the only difference in the controls is the vertical position of the swashplate.

Heavy helicopters tend to be hydraulicly controlled to such an extent that there no longer is a physical link between the controls and the blades (like big jets). You're just opening and closing hydraulic valves one way or another. So... no hydraulics, no controls. The hydraulic pumps are generally driven by the main gearbox so that you will always have hydraulic pressure (main and backup) as long as the rotors are turning faster than a minimum speed. Usually you will fall out of the sky before that rotor speed falls below that threshold. 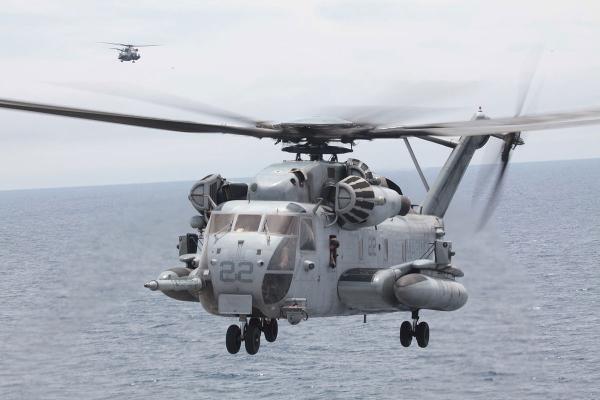 The main hydraulic actuation cylinders are located at the swash plate and at the tail rotor, and the cable run to the flight controls is of considerable length, creating some friction and lack of precision. Also, there is a mechanical mixer installed which provides coupling between collective-pedals-cyclic: when collective is increased, the mixer provides extra tail rotor input without the pilot having to move the pedals. Without any additional measures, the mechanical mixer also creates cross coupling between flight controls which would further complicate precision control: it is a big ship!

In order to make the stick forces simple and light, there is a second hydraulic actuator at each flight control, just behind the cockpit: they are irreversible, and the AFCS system can independently move these and add autopilot inputs. The feel characteristics are as follows:

During autorotation, the coupling between the swash plate and the flight controls is exactly the same as when in powered flight. However, there is considerable difference in the feel and in aircraft response with AFCS ON or OFF. Both conditions are modelled in flight simulators and the pilots are experienced in controlling the ship in either condition.

Not the answer you're looking for? Browse other questions tagged flight-controls helicopter auto-rotation or ask your own question.

8
Is it possible to control the direction during auto-rotation?
23
What happens when two different control inputs are commanded in an aircraft with two control columns?
18
In helicopters, why not have electric motors controlling blade pitch?
19
Is the autorotation in San Andreas movie realistic?
2
What happens if one or more rotors are stopped during autorotation on a quadrotor?
26
Why is *vertical* autorotation in a helicopter not recommended?
1
Does shutting down the engine affect the rate of rotation during autorotation?
0
Are there any helicopters with tail rotors where slip-skid ball may be centered even when fuselage is streamlined to the airflow in cruising flight?
0
Autorotation: Positive Pitch during descent phase possible?
3
How does gross weight affect helicopter autorotation?