Why don't helicopters always takeoff from a hover out of ground-effect?

I've read enough crash reports to see that helicopters discovering too late in takeoff that they lack the power to fly out of ground-effect is a serious problem.

(Only in exceptional emergencies, like when a mountain takeoff gives the rotor-craft a clear glide-path into denser air, would it be reasonable to ignore this procedure.)

(I note that I am assuming that translational flight out of ground effect is always more demanding than hovering. I vaguely remember that this is not the case, but I don't remember why, and it seems counterintuitive since translational motion always establishes a retreating blade with lower lift that then needs a higher angle-of-attack and more power to maintain lift. So if the helicopter can't climb under full power with no translation, it would not be able to once it tries moving forward.)

Forward flight is much more efficient than hovering. As airspeed builds, lift increases from "translational" lift as the air moves more horizontally over the disc. Since the relative airflow is more horizontal, the angle of attack for a given pitch angle is increased.

The vortices and turbulence move behind and down from the helicopter so undisturbed air is drawn over the disc to be accelerated downwards to produce lift. Lift is more efficiently produced by accelerating a large mass by a small amount rather than a small mass by a large amount.

It is more efficient to remain in ground effect and slowly increase speed to gain translational lift than to increase power to HOGE (Hover Out of Ground Effect) and attempt to translate.

The problems you refer to are where an unwary pilot attempts to transition from HOGE whilst allowing the aircraft to climb or attempting to maintain height. Without enough power, the loss of ground effect before the benefits of translational lift are gained will result in a rapid descent back to earth (as vortex ring state or settling with power is pretty much impossible to avoid) or you overpitch and drag the RRPM (rotor RPM) down so low that you cannot produce lift or even worse, stall the blades.

Bottom line, it takes more power to establish positive climb out of ground effect than to gain translational lift in ground effect.

A helicopter takeoff profile is governed by having enough margin to autorotate to a safe landing in event of engine failure, not by more efficient flight due to ground effect. Margin consists of both forward speed and altitude.

Helicopter manufacturers publish altitude vs airspeed charts which prohibit operation above a survivable altitude until sufficient airspeed is achieved. Height without speed, as you suggest for use in a HOGE profile, results in high speed vertical impact on engine failure. Staying in ground proximity until there is sufficient forward velocity to initiate autorotation means vertical impact speed stays low with loss of power.

It just happens to be that a survivable altitude is also in ground effect, so efficiency is a side benefit of a typical takeoff profile rather than a driver. 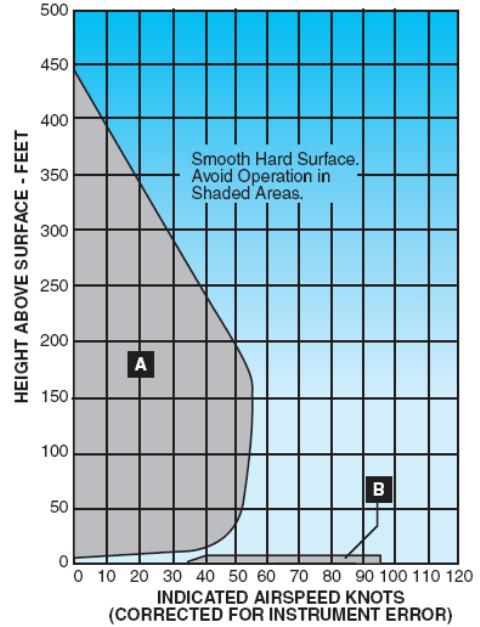 Not the answer you're looking for? Browse other questions tagged takeoff helicopter ground-effect or ask your own question.

95
Are wings any more efficient at creating lift, versus orienting the engine's thrust downwards?
34
Why would a helicopter climb in a spiral?
16
Why is a 0 kt, vertical climb in a helicopter not safe near the ground?
11
Why there is a descent segment during helicopter takeoff?
9
Should helicopters fly when they the lack power for vertical climb out of ground effect?